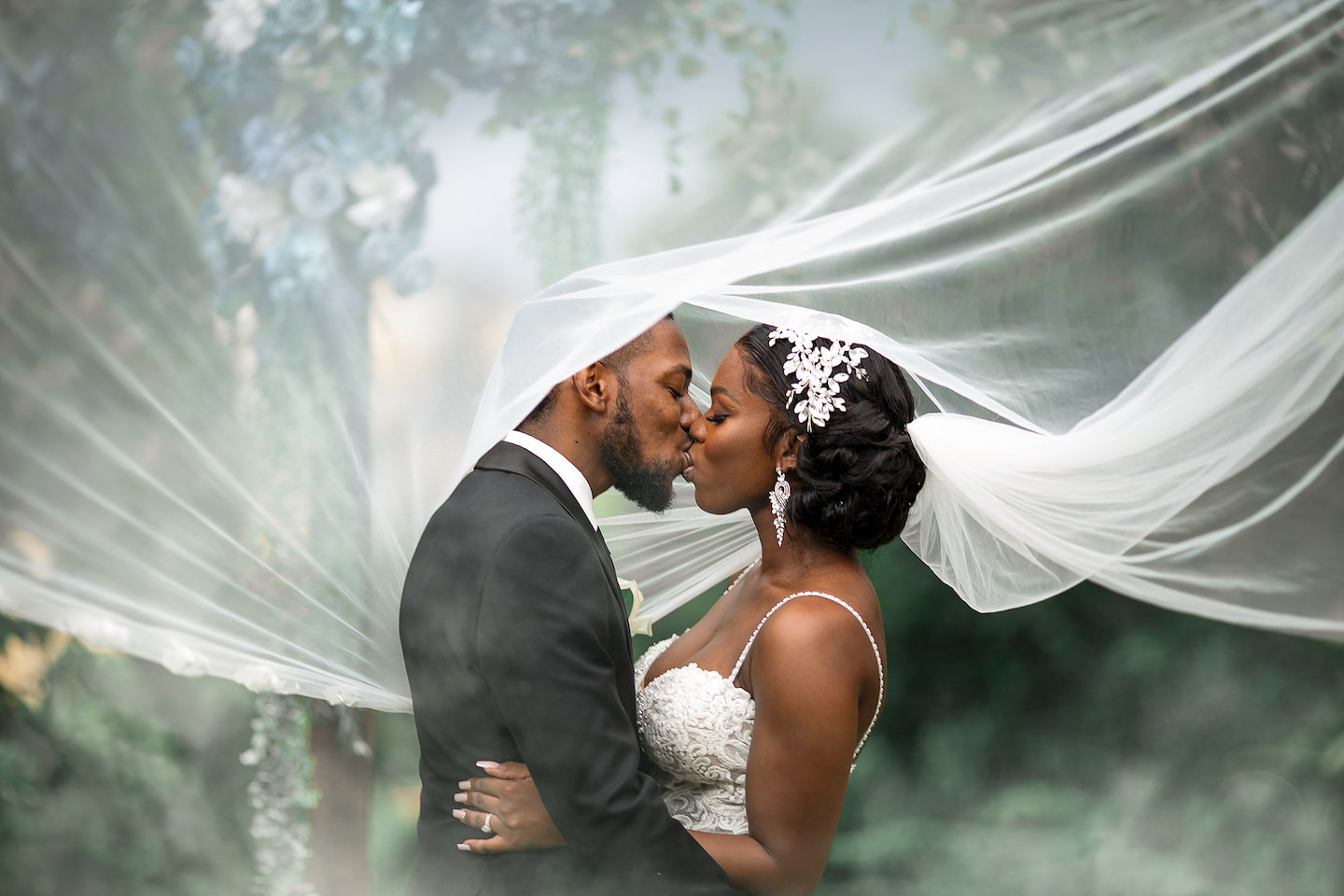 Their story is not one of love at first sight. The journey of the Bartletts is over a decade long, beginning in 2008 on the grounds of the Morant Bay High School in St Thomas, the parish where they were both born and raised.

Sashon was a typical teenage girl, undaunted by her male schoolmates and not afraid to share when she didn’t fancy someone. “The first time I met Krishaun, he said ‘Hi’, to which I responded by cutting my eyes and walking away. I remember saying, ‘Ah you name Krishaun, I don’t like you.’ He enjoyed making jokes – corny ones, I might add – which would irritate me, although everyone else would find them hilarious. Then, after some time, I started to laugh at them too,” Sashon told Island Wedding.

Though wary of boys, she and Krishaun eventually became high-school sweethearts, focused more on their friendship until they officially called themselves a couple. Awkward phases of’ break up to make up’, disagreements and even long-distance during university, when Krishaun migrated to the US during their first year and enrolled at Cleveland State University in Ohio. These occurrences have been the fertiliser their seeds of love needed to grow and bloom.

She said, “The first year of being apart was really hard, as we’re used to being together. We spent a lot of time on video calls and texting. After that, I was able to travel during the summer break periods, but when I began working, I wasn’t eligible for leave, and it became difficult again; but setting goals has played a big part in bringing us to where we are. One thing I can highlight is that he’s always there for me. Very reliable and responsible. Once it’s something in his power to get done, he’ll get it done. To know I’m in good hands is a major plus.” She’s constantly reminding him that it’s not about what happens in hard times, but how one pulls through. He teaches her to always plan ahead even while living in the moment. There must be a time frame to meet specific goals.

Krishaun has always managed to meet his goals. From that first moment in high school when he wanted to make Sashon like him, up to this very day. “I became determined to figure out why she didn’t like me when everyone liked me. I was so determined to impress her that when we were paired for a geography project, to change her impression of me I offered to do the whole thing by myself … of course, she refused to accept. I thought it must be my lucky day, but I was also nervous. Somewhere between trying hard to make her like me, I started liking her – very much,” he recalled.

“The bottom line is, we recognised we are opposites and both stubborn. But with age comes maturity. While I’m reserved, she’s expressive, and it results in barriers in communication, but we are still working on us, together,” Krishaun continued.

He proposed to her in Christmas 2019 on a visit to Jamaica, but it was a discussion they had many times before, he said. “She just didn’t know when it was going to happen. The day I proposed was a day that emotions were all over the place; happiness, sadness, disappointment, and even anger. I basically did a fake mediocre proposal with a fake ring that I just handed to her half-heartedly, and after toying with her all day, I did it like a real man and got down on one knee,” he said. “She has been there to support my darkest days, despite my reluctance to open up and let my pain flood out. She’s also honest, responsible and nurturing. There’s no instance or quality that I can single out, which led me to believe Sashon was the one, but when I took back the fake ring, and she said it was okay, she already said yes, I knew she was irreplaceable. I would say there were many little moments along the way that all culminated.”

The wedding planning officially kick-started in January 2021, and by August, the two were in blissful matrimony. The Craig Bank Estate in Stony Hill was their matrimonial playground. A slightly nervous yet remarkably calm bride travelled from the Courtyard by Marriott, where she and her bride tribe got ready. The garden was transformed into a romantic dream with candles and gold chargers contrasting with the dusty blue and navy floral for the tablescape, while maintaining the venue’s vintage ambience. The skies, on the other hand, were not matching the colour scheme. As luck would have it, there was intermittent rain, but even as the droplets hit their faces while getting ready to say their vows, the couple stood still and did what they had been there to do. Emcee Ryan Dixon provided the wedding entertainment. The couple also put on a show improvising for their first dance to H.E.R.’s Best Part and Vybz Kartel’s Slow Motion (Krishaun’s idea, because it was one of the first songs they danced together to at a high-school event), and a soundclash using songs to say what they would do in different situations.

As a little girl, Sashon imagined she would have the grand fairy-tale wedding – the big Cinderella dress, crown and all. She said her actual wedding was the opposite, though her Maggie Sottero dress, matched with a royal cathedral veil, added the princess elements.

“One thing I did stay true to was my veil. I also knew I wanted a fun wedding, and that was exactly what happened, and instead of 100 people we had close family and friends. I wouldn’t want it any other way. My mom, who is my everything, walked me down the aisle. The showers of blessing did have me a little sad, but my husband gave the most beautiful vows, and I was happy to hear, just married, thank you. It was everything I dreamed of,” Sashon said.

“I had told her I was gonna wing my vows, (so) when I took out my phone with them written [and] I saw her surprised expression I laughed. I had done them the night before. The best part of the day for me, aside from seeing my beautiful wife and the ‘I dos’, has to be the soundclash that we did. It’s not just because I won; I know Sashon might say otherwise (laughs) because of my usual personality. However, I’m a big fan of music, and this is [the] way I knew how to express myself. So, when given that chance, I made the most of it,” Krishaun concluded.