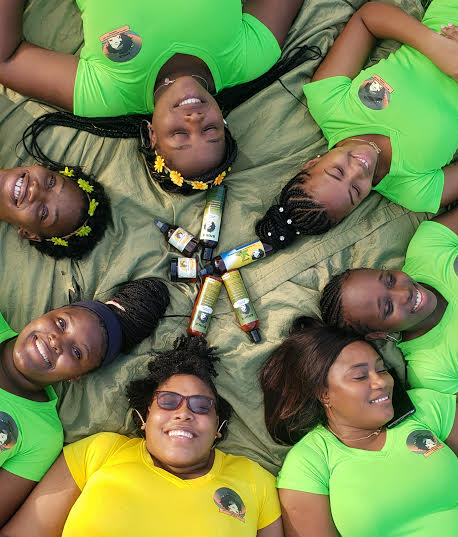 Brittney Robotham is on a mission to change the way women feel about their kinky hair by launching  Britt’s Natural Hair Care Regimen. The main goal of this local beauty line is to inspire others to love and care for their natural kinks and coils.

“Initially, the inspiration came from my love for natural hair. My little sister has 4C type hair which is really thick, kinky, coiled hair and she doesn’t love it, and I see that in most black persons today that they don’t love the kinks and coils that their curls have,” Robotham said. “They prefer straightened hair, they prefer more loose curls, so I started this business to empower young women and children, especially black women, in grooming their own hair.

The business has also improved over the years, seeing that we have extended our product line and we have been officially registered as a business,” she disclosed, “Originally, we began with only coconut oil, then we moved on to coconut-castor oil and aloe, and now we have four oil mixes, which are coconut, aloe, castor and shea, which persons can choose from to combine and create their own preference.” She went on to share that the oils were created with her recipe, which were self-tested, and she can attest to the fact that they work.

Robotham also added that BNHCR line of products has been extended to include moisturisers, shampoos, conditioners and leave-in conditioner, with hopes of further expansion.

“We hope to extend the product line further but the goal right now is to work on perfecting the recipe that we have. Though we think that they are good enough, we are listening to our customers and adjusting to their needs,” the entrepreneur explained.

She clarified that the word ‘natural’ in BNHCR does not only refer to unprocessed hair, but it just means that they do not cater to weaves and other synthetic hair, but their regimen caters to all hair types, even to those who are in the process of transitioning from a processed hair state to natural hair.

“First, transitioning hair will break but before going through that process of transitioning, you have to find out what works for you; what will moisturise your hair, what will take care of your hair, so that in the process of it breaking off you will actually gain growth,” Robotham explained. “My line basically takes care of every aspect of the hair from washing straight to moisturising, and pays attention to the scalp because a healthy scalp equals healthy hair,” she finished.

Robotham shared that since she has been through the transitioning process as well, by using her own products, she can attest that they work well. As such, she hopes to keep inspiring others to find the beauty in their own hair as she continues to create products to help.
Currently, Robotham has an online store but she hopes to have a storefront soon, and is working on introducing shipping internationally within the next year. Over the next five years, she wants BNHCR to be a well-known brand worldwide.