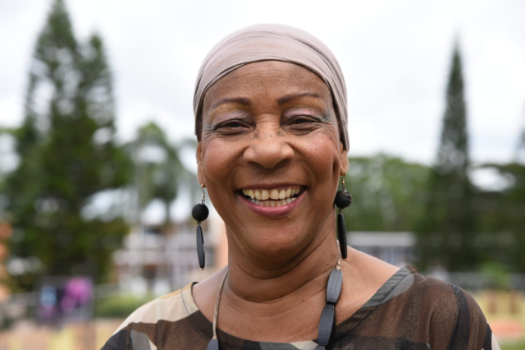 The power of movement. This sparked a young Carolyn Russell-Smith to offer a window of change in the parish of Manchester by opening the doors of her very own company, Khulcha Theater School of Dance.

For over 30 years, this brilliant performing arts pioneer has been dedicating her heart and efforts into sculpting and (re)shaping young minds through the artistic expression of dance. This she has used as a teaching tool to stimulate knowledge and understanding, as well as discipline among her students.

“The power of movement is very therapeutic. For me, you can do so much with movement,” she revealed to Flair, highlighting that it has significantly helped students with autism, those who are hearing impaired or have body imbalances and more.

The Portland native began dancing to the beat of her own drum from four years old. Her knocked knees never discouraged the performer within her. And before she knew it, she was on the fast track to prancing and sashaying across the main stage. The consummate performer went on to study at the Edna Manley College for the Visual and Performing Arts School of Dance. Engaging with an audience, however, wasn’t enough for her. She yearned to cultivate the up and coming generations through her developed artistry.

In a recent interview with Flair, the dance and regular teacher mentioned exciting stories of starting a dance education programme for youths while residing in Kingston. She expressed sincere joy at helping children who were labelled as ‘troubled’, creating her lessons around music and dance. When the opportunity presented itself, she jumped at the opportunity to take her students to local annual festival competitions, where they excelled, exceeding the expectations of others.

Russell-Smith progressed to working as a performing arts adjudicator at the Jamaica Cultural Development Commission (JCDC). It was during the rural run that she discovered an outlet that would really make a groundbreaking impact. With the entertainment mecca dwelling in the city of Kingston, she decided to expand her growing family, giving birth to Khulcha in Manchester. Her students are not only taught choreography, they are sensitised about nutrition as well.

Among her awards is the Prime Minister’s Jamaica 55 Commemorative Medal of Appreciation for Service to Jamaica in Education and the Creative Arts she received in 2018. And even with her accolades and incredibly positive influence on the community, Russell-Smith remains humbled by her genuine passion for helping others, particularly young girls. “I’ve gone into schools and have talks. I’ve used dance to enrich lessons. There have been ups and downs on this journey but it is a joy to motivate and educate not so much the haves, but the have nots,” she added.

Outside of the school, she is an author who released her book, All-Inclusive for Dance. Additionally, she alongside her husband, are paying it forward by being actively involved in several outreach programmes in schools such as Santa Preparatory, 14 years running, as well as churches, geared towards fostering growth and development within the community.