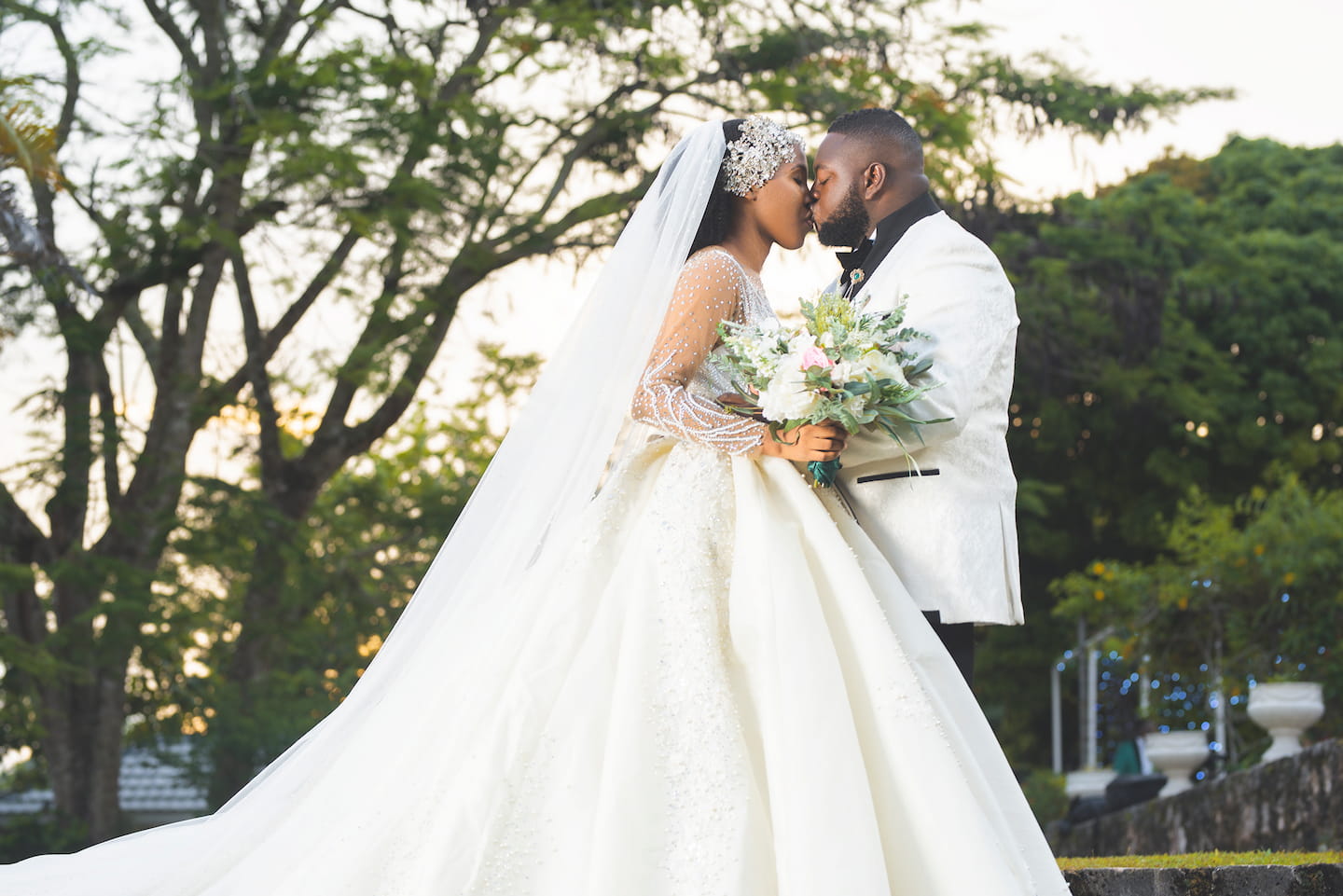 Ebony and Romario tie the knot

Lovebirds Ebony Gordon and Romario Williams share a beautiful story that landed them in each other’s arms and hearts. Two years ago, her youth choir was asked to minister one night at his church Holy Ghost Power Ministries’ youth convention. But this wasn’t the first time fate had them crossing paths.

On their way to the church on that occasion, Ebony recalled a vehicle coming to a stop at the light the same time the car she was commuting in did, and a passenger made a random wave at the window. Her church sister returned the greeting, and the two women laughed at the unexpectedness of the gesture. She later discovered that the ‘waver’ in question was none other than Romario. If that wasn’t fortuitous enough, let’s go back to a year earlier.

“I saw my husband before I met him. Not sure how, but I got on to his Facebook profile like a year before I met him,” she told Island Wedding. Was this a mere coincidence or divine intervention paving the way to their romantic destiny?

The moment Ebony set heels into the church, Romario couldn’t take his eyes off her. “I was distracted by her captivating eyes. As she sat and I stared at her, my heart melted. With her fluffy hair brushing across her shoulders, inside of me flared. Her cheeks were begging for my attention, and I knew then and there that I was falling for her,” the hopeless romantic shared.

So how do you approach a woman of such elegance and grace? He had to be strategic and debonair. After the meeting, he executed his ‘meet-cute’ plan without fear, holding up a whole bus loaded with people waiting on him so that he could create the right moment. “I couldn’t let the night or moment end without saying to this angel that ‘I prayed to go to heaven every day, but didn’t know someday heaven would come my way.’” From that day on, he saw Ebony as more than just a friend, and the duo went on to initiate an inspiring courtship filled with love, hope and happiness.

After having a rough workweek and setting a wedding cake over the weekend, Romario suggested that they both relax at Emancipation Park. The early bird waited for her knight, who was tardy in his arrival. Luckily, he made up for his lateness with a rose in hand. “We ended up walking around the park’s jogging track multiple times unconsciously, just talking about any and everything, that we even forgot about food. We got something to go instead.” With ease, she disclosed more serious and vulnerable aspects of her life, like the severity of her mother’s illness; and Romario was a good listener.

Sunday, November 1, 2020, a nervous Romario and his lady love would be attending church. It seemed like the typical service, but it was far from the usual. He was going to ask Ebony to make him the happiest man alive by being his wife. He went ahead and asked his friend to pray over the future proceedings. His nerves settled until Ebony arrived. He was scheduled to preach that morning, and it would be her first time seeing him in action. The added pressure of popping the question almost crumbled the little strength he had left in him.

But he delivered a powerful word in the house of the Lord, and just when fatigue entered his thoughts, he heard his cue for part two. “The sound man started to play the music for Stuck on You by Lionel Richie. I went to her seat, took her by the hand and walked her to the altar for the first time. I went down on my knees and told her that I’d be a fool if I wasted her time or let a woman like her walk out of my life. Then I asked Ebony to marry me, and without hesitation, she said, ‘Yes’.”

Since taking over her late mother, Marjorie Gordon’s business, Gordon’s Bridal, Ebony naturally oversaw the wedding planning process with assistance from family members and close friends. Between the uncertainties of the global pandemic and the loss of her mother, who was always praying for the day of her wedding to come, it took a mental and emotional toll on her, and by extension, her husband-to-be.

But on June 26, Ebony was a sight of exquisite perfection in her luxury, long-sleeved ball gown, inclusive of skin tone illusion tulle, pearl sequins, crystal and 3D flower details, along with a train, courtesy of LuxBrides Ja. Her dashing groom, suited for the special occasion, could not wait to marry her. The two tied the knot at Panorama Estate, Coopers Hill, St Andrew. Mike Anthony Photography was on location to capture all the beautiful elements played out in wonderful fashion.
Ebony declared that she could give a one-page list of everything that went wrong, but she still would never change a thing, “It made the wedding OUR story, in its own right and uniqueness. And that day just solidified that God had our back from day one. We overcame every fight and sealed our commitment because it looked impossible so many times.”

Romario agreed, noting that their wedding was indeed unforgettable. He is grateful for his support team and loving wife for making it all possible. Under the twilight, the couple shared their first dance as husband and wife, between bouts of laughter and romantic kisses.