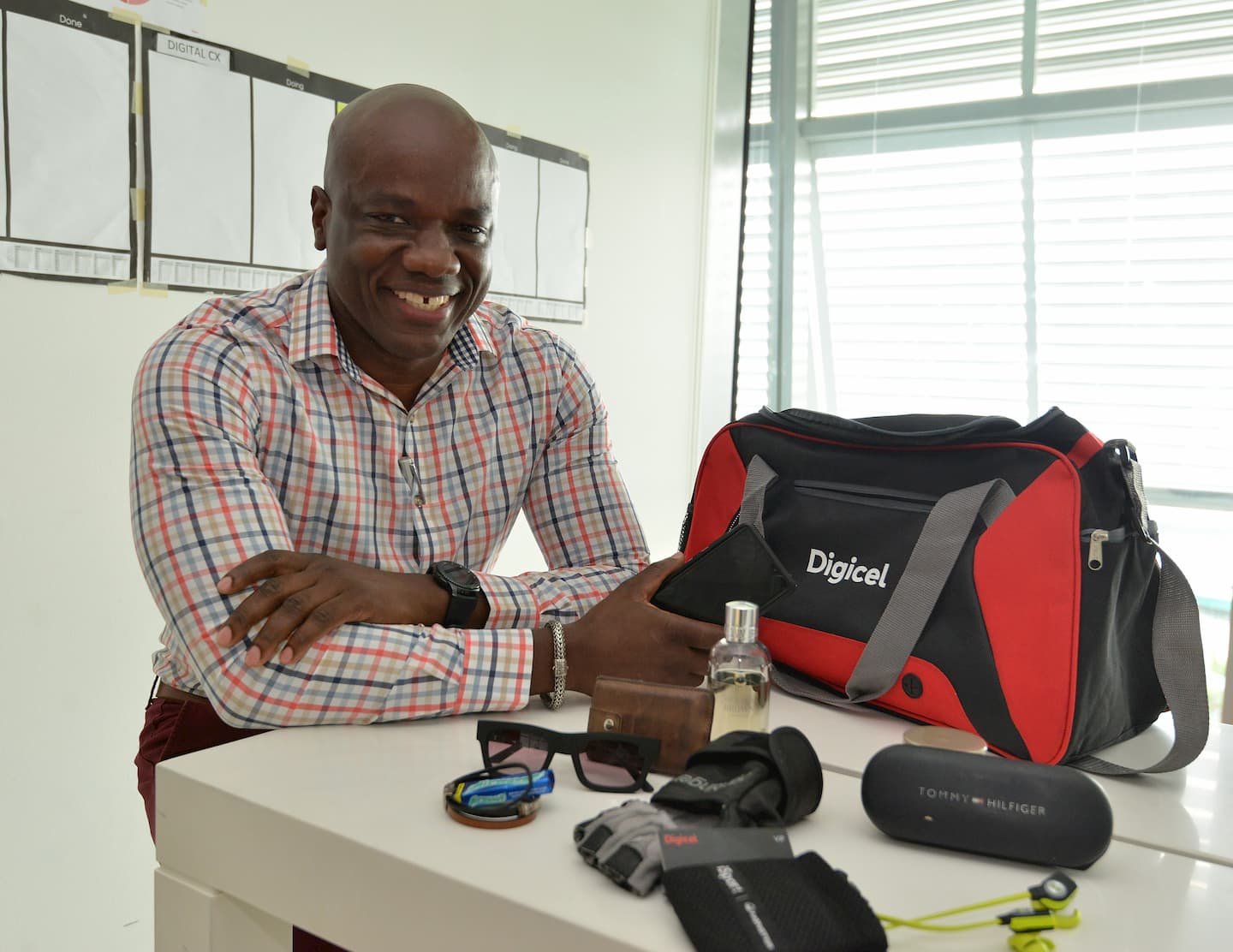 Digicel’s Head of Public Relations Elon Parkinson enters the room with a laptop in hand and his bluetooth in ear, looking every bit the modern working man from every stock photo you’ve ever seen. He sits behind a desk, pops the laptop open and crunches out some work right then and there. He has graciously allowed us a look into his bag. A laid-back personality, we were happy to watch and wait when we caught up with him for the quickest rundown ever of what he’s got in his bag (and what’s kept hidden away in his car).

“So what do you want to know?” he begins with a smile, and from his pocket he pulls a stylishly simple leather card holder, perfectly aged by use and clearly very durable for his day-to-day needs. He keeps a heavy-looking silver pen tucked away in his shirt for ease of access; everything has a place for Parkinson.
“I don’t carry a traditional wallet, instead I walk with a card holder, which means I don’t have a lot of cash on me and that’s primarily because I don’t like anything in my pockets besides a pen and some phonecards because people are always asking me for phonecards!” laughed Elon, as he showed us his array of paper and plastic, which includes a shamelessly plugged Digicel-branded VIP card for airport lounge access.

Parkinson’s must-haves
Minimalism is this guy’s game so anything that can’t fit into his gym bag gets left in the dust. This Digicel-branded gym bag is at the top of his must-haves because from it he pulls everything else he may need to be his tip-top best:
• Sunglasses case (sunnies inside)
• Gym gloves (the gym towel he normally has with him got left behind in the car)
• The case to house his bluetooth earphones
• Airwaves gum
• Moisturiser
• Cologne

Parkinson lives on a philosophy of simplicity, unless he’s talking about his cologne collection, of course. Once a flight attendant, he’s been around the duty-free block and so has the know-how about cologne and exactly what it is that he wants from a scent, particularly this rare gem he picked up from a trip to London in the summer.
“Molton Brown Russian Leather, it’s essentially masculine. I think the aromatic blend of spices work well to bring off that sort of masculinity about the cologne and it’s a rare scent, so whenever I wear it I get questions. This line of cologne is very distinctive. I prefer the spicy notes.”
Maybe having a signature scent is so last year, now you should be into having a signature note. For Elon and his collection, which includes higher-end Tom Ford’s Black Orchid, Molton Brown Spice Black Pepper, Russian Leather and Geranium (he knows what he likes and he gets it in triplicate), and the mid- to lower-range Lacoste Blanc Pure, Abercrombie and Hollister.

Whatever’s not in his bag is on his person. Sitting snug on his wrist is his Samsung Galaxy Smartwatch which syncs with his Samsung Galaxy Note 9.
“I’m a Samsung guy. I find the Samsung note device is the phone for the modern executive. It’s user-friendly, accessible and it fits nicely in your palm as well.” He grips his most necessary productivity tool flashing on his wrist, his matching timepiece. “It’s the only digital watch I have. I still like chronos and I’ve been a Swatch guy since high school. All of my other watches are Swatch, I have about four,” he sheepishly admits before defending his preferred brand, known more for its bright neon wristbands than sleek designs. “Believe me, Swatch has really modernised their brand. I mean they still have the nice quirky, fun-loving watches…” He’s not wrong, the watch he shows us from his Instagram is far more traditionally sedate than you’d expect.
Hidden away in his car, or maybe not so hidden, are his gym shoes, which is very courteous of him. Goes to show office etiquette makes all the difference. Along with his gym shoes are jackets, a change of dress shoes and Digicel-branded polos just in case there’s an event he has to step in for. Parkinson is the quintessential modern man, and if you’re looking to foray into minimalism, he’s the man to emulate.