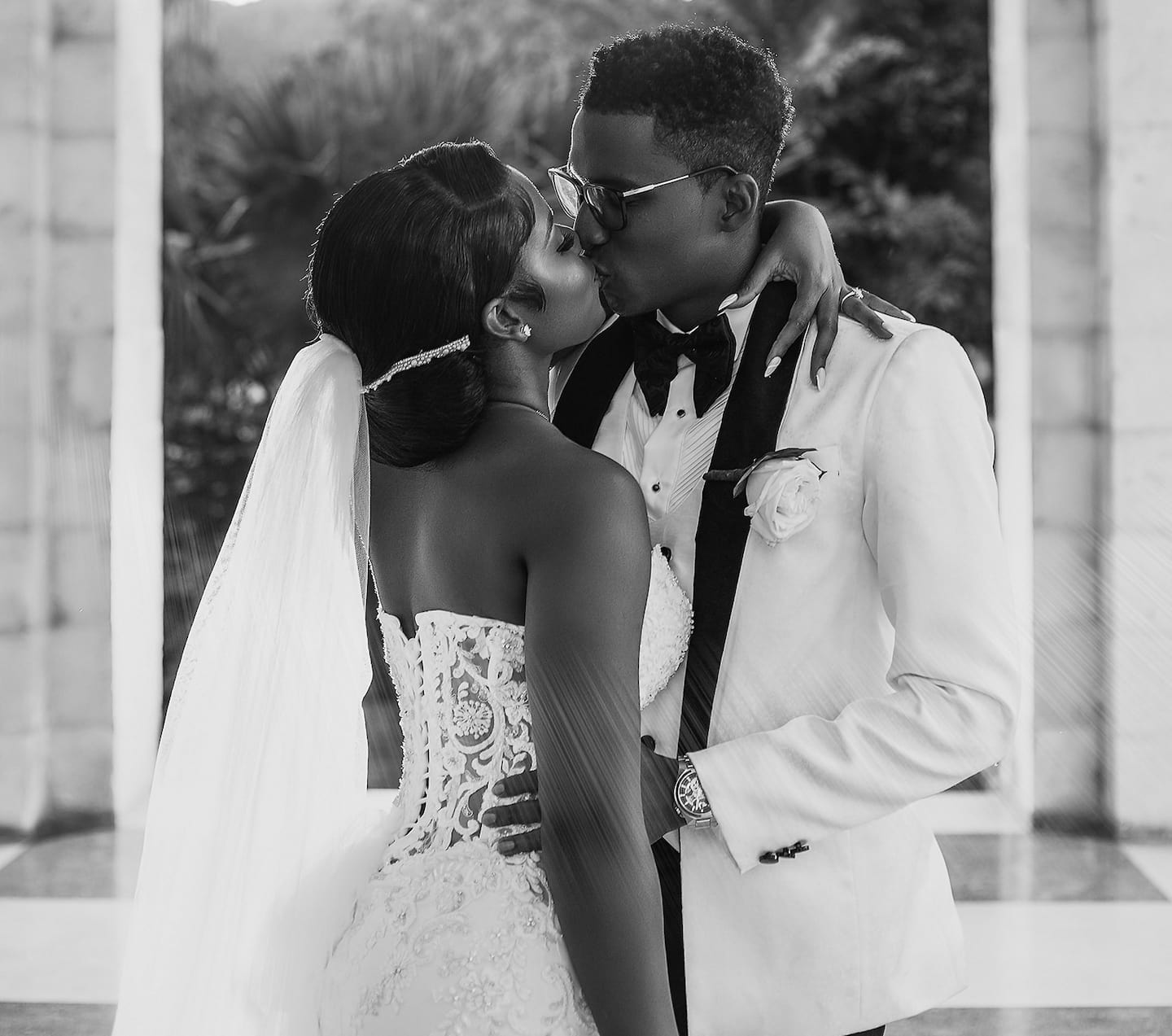 He has “the dreamiest eyes, the softest lips, and the sweetest smile that melts me every time,” Kimberley Jack told Island Wedding, painting quite a picture as she described her significant other, Alex Neil. So much so that it came as quite a surprise that it wasn’t love at first sight when the two met. But it wasn’t, at least not for Kimberley. At the time of their first encounter, she was so focused on her journey with God that she didn’t give her husband-to-be the time of day.

These lovebirds met during Kimberley’s annual church conference at The Knutsford Court hotel back in 2013. Alex was invited as a guest, and Kimberley was charged with issuing out name tags at the entrance. Mesmerised at first glance, Alex decided to pursue further.

“Kimberley immediately caught my eye. My heart literally skipped a beat. She looked stunning and when she greeted me, I low-key melted. I made sure to catch a glimpse of her name tag, just so I could find her on Facebook and message her. The conversation started on FB messenger,” he shared, adding that from then, he knew that she was the one.

With the written exchange happening the same evening of their meeting, the pair soon developed a wonderful friendship. Their first date didn’t occur until some time after in 2017, when he made a trip overseas. “Living many miles away, 1,643 to be exact, it took us a while before getting to experience our first official date. We went out on a dinner date while he was visiting the US.” She recalled feeling overjoyed and finding fulfilment in knowing that Alex was the one to take her out on her very first date, ever.

From the start, she found her beloved to be a sweet, decent, and upstanding young man who knew exactly what he wanted and would go to great lengths to get it. Over time, she discovered his thoughtful, ambitious, optimistic and commanding yet calming nature. “He always tries to consider the impact his words and actions will have. He has countless plans for us and our unborn children. I love how he naturally takes charge and is solution-oriented. Lastly, he’s the perfect calmative to my constant overthinking,” Kimberley said.

Alex gushed that his angel is not only beautiful and elegant, but she is also independent, ebullient, and his tower of strength, “Kimberley’s entire being exudes beauty, and she is the sweetest girl I have ever laid my eyes on. Gracious in her approach, she has the right style and knows how to fit in perfectly. There is never a dull moment around her. She is the life of the party.”

Alex makes her feel like everything is possible, and that she is unstoppable, “He has invested so much in me without being asked and supports me in whatever I decide to take on. Holding my head up whenever I feel down, and with all my flaws and insecurities, he reminds me daily that I am the most beautiful woman in the world, even when I know I’m at my worst,” said Kimberley.

Long-distance didn’t stand as a deterrent for undeniable love. “She doesn’t even have any idea how much she pushes me to maximise on all that I’m doing. When we started dating, there was this unexplained inspiration that propelled me to excel in all I was doing. She continues to be an encourager, motivator, my number one supporter, my Supligen and my shoulder to lean on when things aren’t going well. She helped to manifest that side of me that I had no idea existed. I can confidently say that I am a better man today because of her,” he added.

They were together for three years and five months when Alex asked the love of his life to be his wife.

Kimberley visited Jamaica for the Christmas holiday, which coincided perfectly with Alex’s birthday on December 29. Knowing that he wanted to propose then, but having no clue how to, the best friends of both parties took control of the logistics, setting up an idyllic moment for a beautiful engagement at the Boone Hall Oasis in Stony Hill. “The proposal was everything I dreamed of. I desired to be surrounded by family and friends when he popped the question, and he made sure to make that happen,” Kimberley confirmed.

On July 17, exactly four years after Kimberley finally decided to be Alex’s girlfriend, the two became husband and wife. The enchanting wedding ceremony, held at The University of the West Indies Chapel, was everything the couple dreamed of. The bride was a glorious vision of elegance in her gorgeous, form-fitting, off-the-shoulder wedding dress boasting a sweetheart neckline and a long train. Her handsome prince could not wait to say ‘I do’. The love spilt over into the reception, held at The Knutsford Court hotel, in the very same room where they first met. Today, they wear the official name tag of Mr and Mrs Neil.