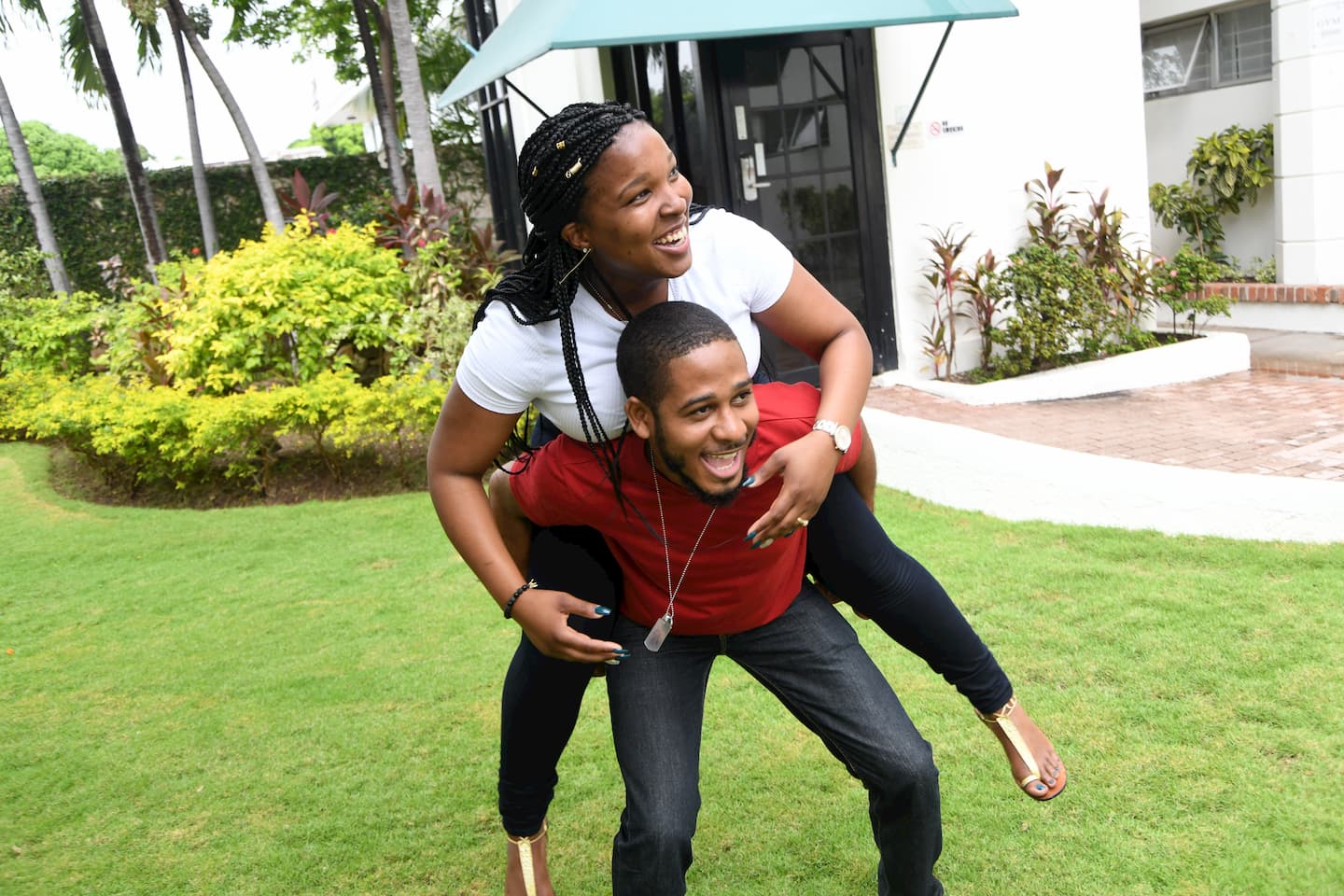 Going the Distance with Milton and Candice

Once the words ‘long distance’ are uttered, couples (and singles alike) begin to share all the reasons why the concept will never work. Milton Wisdom and Candice Burkley are living, vibrant proof of just the opposite. The lovebirds cosied up on the sofa of a two-bedroom suite at the Knutsford Court Hotel to set the record straight and tell us more about their romantic journey.

Away on professional pursuits, Milton and Candice returned to Jamrock, reuniting and spending time with family members and friends, before heading back out on business. This particular trip was already special because they travelled together, but Milton decided to take things up a notch by putting plans in place to make the love of his life his wife.

Half of a score plus a little more marks the date of fate.

Milton first laid eyes on this beauty when he began working at a catering company known as Top Shelf. New to the company, he was quickly known as the pretty boy. Flocked by female interests, the only person who kept him at bay was Candice.

“Usually, when we do functions, I always handle the head table. And this one particular day, my boss said that he needed me on training for the new persons. So I asked who was working head table, I heard it was Milton, and I responded, “I don’t know a Milton,” but when I saw him, I realised that he was a face boy, so that’s why he was chosen,” she told Take Two. She did reveal to him that he only got the responsibility because he was handsome. Milton was intrigued. Then there was the matter of labels. The majority called him Milton, but Candice was puzzled by this name. Confused, she discovered soon after that the man who introduced himself to her as Ricardo was actually Milton. His reason for giving her an alias: she was different and was most deserving of something special.

The pair went on to form an unimaginable bond together. “I couldn’t foresee this journey. There has been a lot of ups and downs, but mostly ups for sure. It has been quite an adventure,” Candice said. “She pays attention to the slightest details, and if someone sees the needle in the haystack, then you hold on and don’t let go,” he said. And they have been going the distance ever since.

They explained how seeing each other daily all changed one day when Candice received the opportunity to further her hospitality career abroad. “Honestly, [for] 80 per cent of our relationship, we’ve been separate. I travel for work, so I leave [for] a year or four months at a time,” she revealed. Milton interjected and had this to confess, “When I carried her to the airport for internship and returned home, I sat there in silence and just broke down. The house was empty and I was lonely. This forced me to be alone.” Candice drew closer, reaching out for his hand in support. She, too, lamented that it was no easy feat. In fact, the transition was harder than expected. “We were always together so that was rough.”

Time spent apart could have been viewed as a deterring factor, but it actually fostered individual growth which created an even stronger bond. “The distance actually works for us. It gives us a greater appreciation of each other when we are together. It forces you to be open in communication and pay attention to being by ourselves. Because we met at different points of our lives, we needed to work on ourselves before this, us, could make any sense. It was hard but we wanted to make it work and it was worth it. It was perfect,” the bride to be shared.

On November 10, a nervous boyfriend set up an impromptu get-together by the beach with family members and friends, under the guise that he wanted to spend some time with them before they headed out overseas to work. But the truth is, the event was much more significant than that: he was going to ask his long-term girlfriend to marry him. Once he did, his equally nervous girlfriend, clueless about everything leading up to the big question, said a resounding yes. The two continue to bask in the bliss as they embark on a new chapter to I Do.

Milton is the morning person and gets everything prepared for his lady love, who is crankier in the mornings. Milton is more spontaneous while Candice is the planner. He took the cake for outgoing, and she is more affectionate – when he is around, there is a calm and comfort, according to her. Candice and Milton made trivia look like a walk in the park and got almost all of the questions right – they promised they didn’t practice. He correctly guessed that her favourite gift from him was a self-portrait, and got Grey’s Anatomy as her fave series right as well. But although she shared that her eyes are her best feature, he noted that she loves her thighs, which she admitted was true. Candice started out strong, accurately stating that Campari is his spirit of choice. His fave colour, which is hers as well, is purple. But she dropped the ball guessing Hanes as his undergarment of choice when he is a fan of Fruit of the Loom.

The message that they travel with when they’re apart: Let’s grasp with two open hearts today to bind CB and MW. “It was my first gift to her when we were going on our very first date,” Milton shared. “He gave me homework, use X amount of characters to write a message and, of course, I like a challenge so I did it and sent it to him. And he said that it was cool. Then he gave me those tags and they’ve never left our necks since,” she added. The key to a happy relationship for them is communication, compromise and commitment. Understanding your partner is essential, too, knowing the other person’s cues: when to hug, or when to kiss.

They are looking forward to tying the knot in 2021.