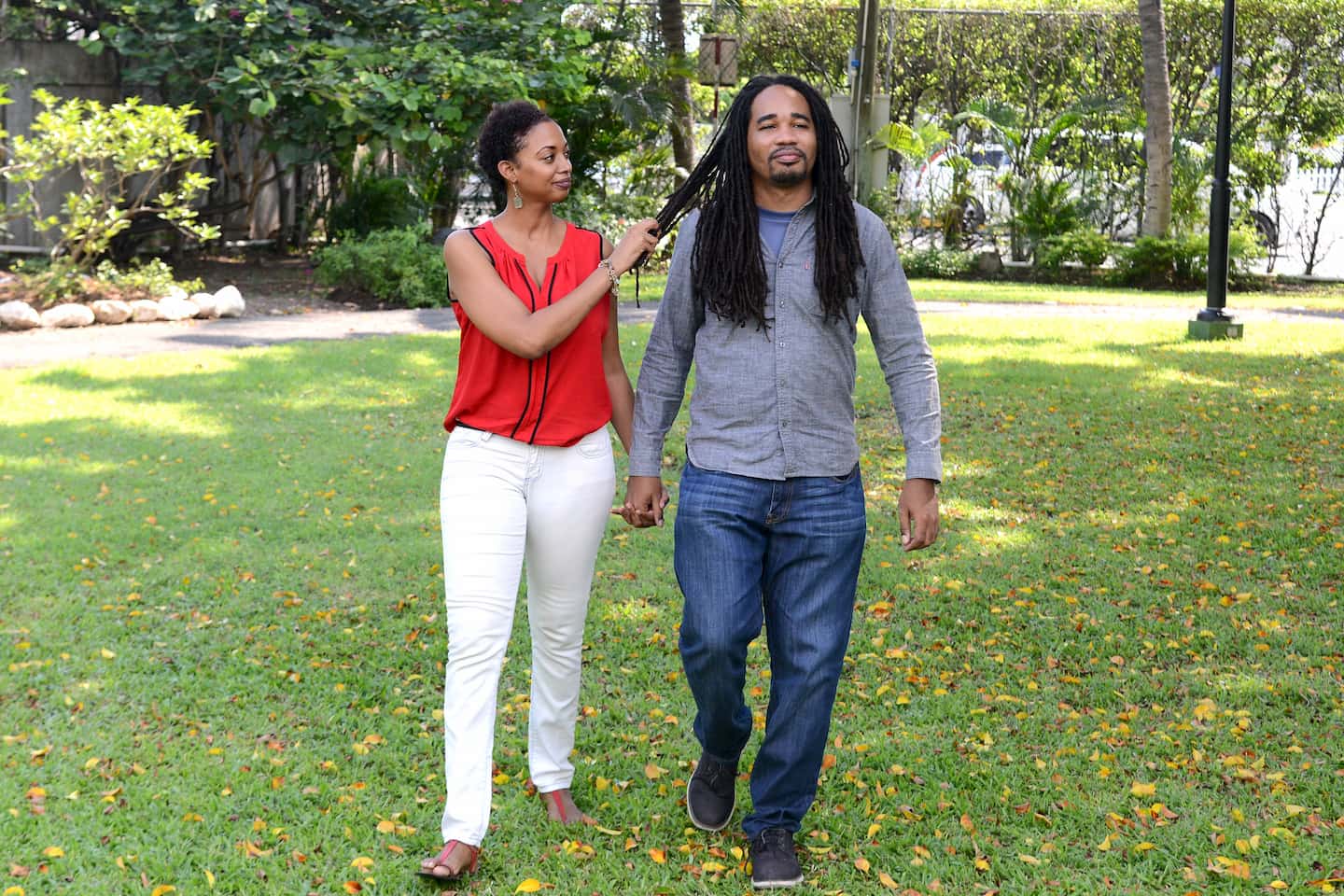 Humming Happiness – Eclipse of the Art with soon-to-be Elliotts

It was on the cusp of a radiant Wednesday afternoon when a hummingbird paid the Flair team and soon-to-be Elliotts a visit in the gardens of The Jamaica Pegasus hotel. The majesty and beauty of the active bird of paradise was a truly phenomenal sight to behold, for those who witnessed its spectacle. The hopeless romantic in Lesli-Ann Belnavis turned to her fiancé, Michael Elliott, and immediately took its presence as an enchanting sign. Promptly, she began her Google search and ran with the notion that “ … hummingbirds are seen as healers and bringers of love, good luck and joy. They are a sign of love and will bring love to the person who spots them.”

Like a moth to a flame, we watched with sheer admiration as the bird flew along with us when we shifted location. The couple hummed with happiness for the duration of our love session.

The two first laid eyes on each other in February of 2014 while attending a concert held at Devon House in Kingston. Lesli-Ann explained that she was friends with his sister and had already met other members of the family, except him – nothing before its time. Michael introduced himself and showed her some of his artwork: the art therapist found his pieces to be interesting. A few days, the painter and photographer sought to draw up more conversation and went on the hunt for his future love, browsing Facebook to find her. They chatted each other up for a moment, before he broke the virtual realm and invited her out to dinner at the location where it all started, Devon House. They’ve been maintaining good communication ever since.

Straight away, Michael found Lesli-Ann’s most striking and captivating feature to be her height, “Initially, I thought she was very tall, and I could see eye to eye with her.” But that was by no means daunting to him. “She was just beaming with radiance, very angelic, and I said to myself, ‘You know I need to meet this person’.” After speaking with her, he found that she was a warm person, open to conversation – he noted that he could take the conversation further.

The attraction started earlier for Michael than it did for Lesli-Ann. She was more geared towards entertaining the idea of their shared interest: art. This became a major talking point among the pair. It wasn’t until much later while they were dating that she developed deeper desirability for her now other half. But it was something that he said while exercising on a walk-up Mountain Spring, a plus in her book, that really sealed the deal. “I remember looking at him and saying it’s so good to just pause, take a break and take in life and appreciate it. He highlighted then and there that I am a therapist and I have to handle their anger, sadness and overall emotion. ‘So you’re going to need an outlet’, is how he ended his speech.” That was the line: he is now her lifelong outlet.

Four years after dating, he proposed to his wife to be New Year’s Eve among family members and friends.
Michael was deemed the more romantic one, taking things old school with chivalry, while they share the title in being adventurous and amusing. The creatives lend support to each other by providing insight into ideas and motivation, while giving pointers and feedback. Michael for one is happy that Lesli is not just his life partner but his creative partner. “That’s one of our holding gels. That’s what makes us cohesive,” Lesli-Ann added. They executed a collaborative art show two years ago and discovered that their creative synergy was present and prevalent.

These two had too much fun during the trivia segment. Laughter erupted and they stumbled upon great joy in the wrong answers. Lesli is still trying to figure out his Dior answer for her favourite scent, since she is allergic to perfume. And he was on the ball with Incredibles as her fave movie but she gave a variety of different action films. The key to a happy relationship for them is communication – keeping in check with goals, hearing and understanding, honesty, support, foundation in spirituality, as well as adventure, keep it interesting.

In the end, we were advised to ‘Close unu eyes’ as they shared a loving kiss. Total eclipse of the art.