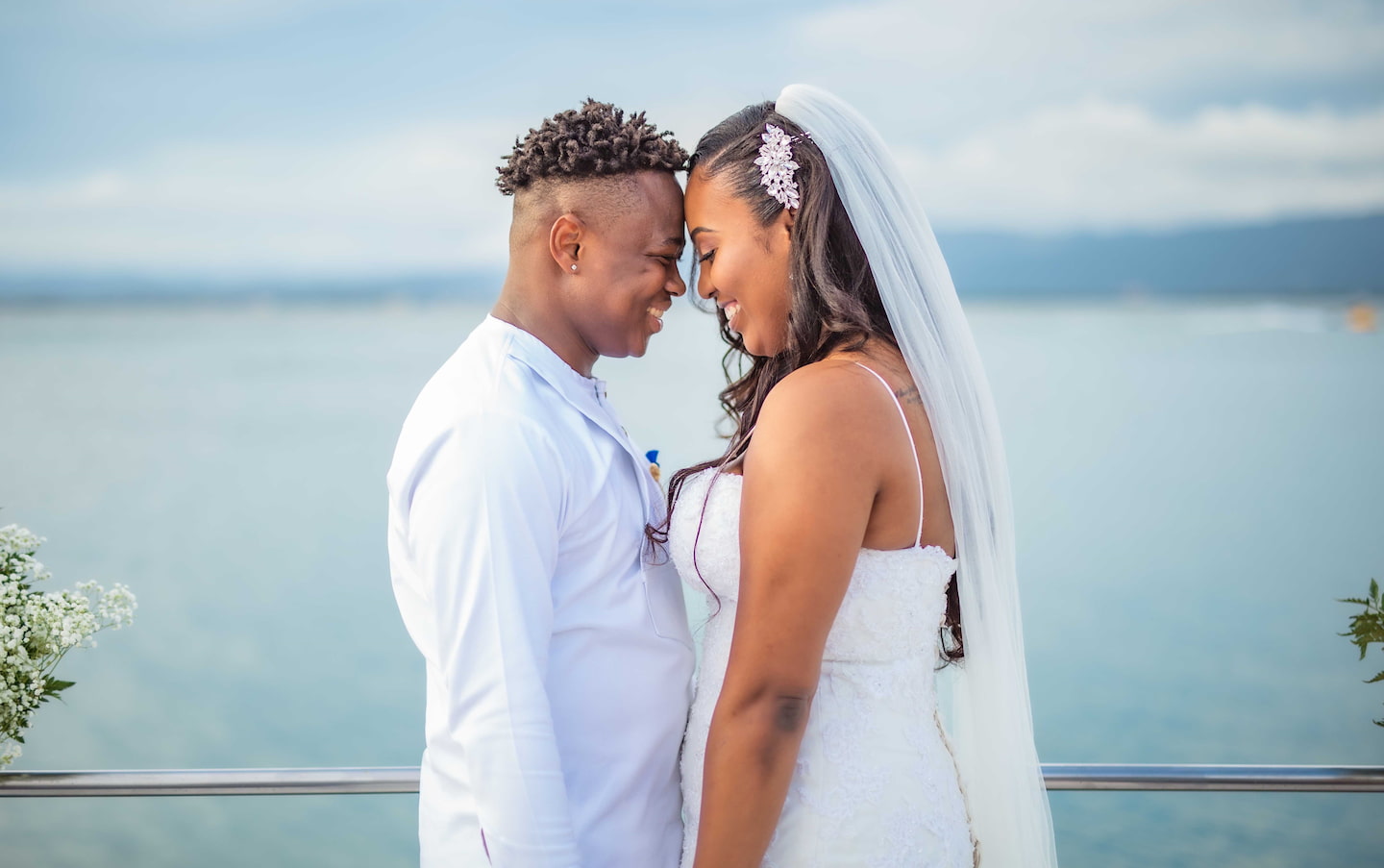 Kevoy Campbell first laid eyes on Mikiela Gonzales in October of 2009, while attending a fair held at the Immaculate Conception High School for Girls in St Andrew. “It was my first time going to a fair actually and it was fun,” he told Island Wedding. Mikiela, 14 at the time, had entered a best-dressed competition and during the presentation, the 16-year-old St Jago student was impressed with her fashion. Their eyes connected as she rocked the runway on stage, igniting an exciting spark between the two.

Mikiela, however, recalls a completely different first encounter. She was actually fascinated by his dancing skills. “He and his friend were there dancing, and my friend and I looked at each, jokingly claiming the one in the green and the one in the grey from afar,” she said. The meet seemed so magical for the teenager because, coincidentally, she had a female friend by the name of Kevoy and expressed hope that one day, she would meet the boy version of her friend.

Mikiela’s friend, his namesake, then set out on a quest to find the guy in green. When she did, she reached out via Facebook, informing him of her friend’s interest. Later that week, she told Mikiela that she found the guy in the green and that his name coincidentally was Kevoy. Pretty soon, the pair became inseparable. “I shared the same birthday as his younger sister, whose name was similar to mine. And for me, the stars aligned. This was a heavenly connection,” Mikiela revealed.

These young lovers even shared a star beside the big dipper, naming it Destiny. They would check in on each other about their star after their brief high school romance. Kevoy, two years his beloved’s senior, graduated from high school and broke things off, as per Mikiela’s mother’s request, so that she could focus on her exams, “It was very devastating for me to lose my first love. But he always found a way to stay around.” Kevoy interjected by saying confidently, “… because I knew the end goal.”

They remained close to the other’s families and, by extension, each other. This helped them to rekindle their flame a few years down the line. In synchrony, they recalled their first date at TGI Fridays as the most wonderful experience.

Cut from God’s cloth, he defines his darling as selfless and caring. He sees Mikiela as a determined, ambitious and God-fearing woman. “I was very broken when we got back together. And if it wasn’t for her, I wouldn’t be where I am today. She was very patient with me. I’m not a talker but she ensured that I spoke what I was feeling and expressed my emotions.

Describing the love of her life as ambitious, bold, protective, supportive and family-oriented, the math wiz appreciates the fact that the love of her life came from very humble beginnings and has done so much for himself. “When he is not on the high seas, he runs a clothing store that he owns. Bold in his fashion and professional pursuits, he is not afraid to stand out and take a risk. He is God-fearing and I love seeing that journey from then to now,” she said.

Kevoy has assisted her with emotional growth. After suffering severe trauma almost three years ago, Mikiela found herself in a really bad place, just as Kevoy was coming back into her life. “He was so patient and respectful of what I was feeling and the time I needed to heal. He needed me to love myself and he taught me that. It taught me, in turn, to pour back into him and love him. He helped me to be brave and grow my math business. He has assisted me spiritually as well, in how he worships and talks about God.”

Home is definitely where his heart is, with her. Kevoy candidly jests about watching movies, even though his beloved would fall asleep at the beginning. “I shared a little bit of her greatness in the interim before making her mine again. But I knew the week after I met her that she was the woman I was going to marry,” he declared.

After two years of courting, Kevoy popped the question in January 2020 while on vacation in Bali. “It was her dream destination, so I couldn’t lose with a proposal in that location. I ensured that the proposal was pretty simple, to match her personality. I arranged with the AirBnB we were staying at to execute a romantic set up – flowers all over and the petals on the bed head said, ‘Will you marry me?’ I was nervous, shaking. I didn’t know which hand to put the ring on. But it was everything I imagined it to be.”

The engaged couple decided to get married the same year, planning the wedding together in a mere three weeks for the bride-to-be’s birthday gift.

With Kevoy being a navigational officer and Mikiela loving the water, it was only fair that the nuptial scene is set sailing off into the harbour. Yes, they tied the knot on a yacht, Loose Cannon to be exact. The newlyweds are still in awe at the beauty and majesty of their union, which took place on the day after Mikiela’s birthday, November 21, 2020. “As the sun sets and I was reciting my vows, I saw Kevon getting emotional and it solidified that he felt everything that I was feeling. Also, when we did our first dance, I really loved that moment as well,” Mrs Campbell reminisced.

Her husband agrees that hearing his wife’s vows was his favourite matrimonial moment. “It wasn’t just about what she said. It was that while she was saying it, I could remember everything we have been through. We have been through a lot but now we are here, by the grace of God.”