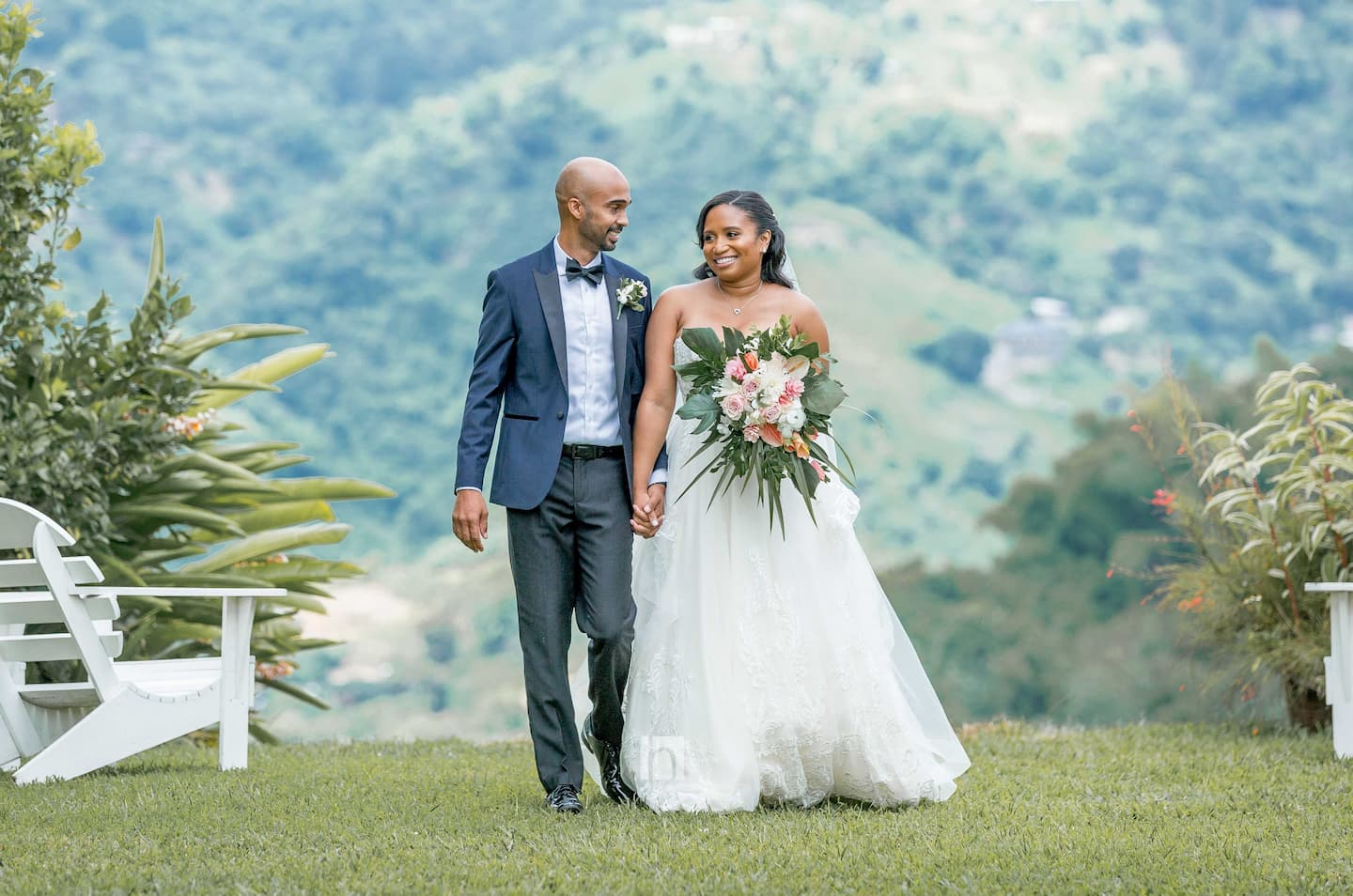 She’s a Spice Girls and Britney Spears type of girl, and he’s a man who loves contemporary classics, with his radio always tuned into BBC, but differing musical tastes did not deter Laura Chin and Matthew Budram from choosing to dance along life’s road forever.

“I would say our entire relationship was preparation for marriage. We both knew from very early on that we were endgame and that marriage was inevitable,” Laura told Island Wedding.

She added: “Even though some may think six years is a long time, Matthew and I are still a young couple. We are still learning how to navigate and nurture our relationship. It has been a lot of work and it is still a work in progress.”

She met her beau on a chance encounter in September 2015. Then three weeks of dating and playful banter, a label was put on their relationship. Not that it mattered to them, it only marked the beginning of a journey, one that has taken them on adventures — discovering safe havens, not only across the world, but in each other. They admit to getting lost, literally, along the journey and laugh, thinking back on trips that became memorable learning experiences. For Laura, it was, “travelling to Spain as a new couple and seeing Matthew freak out when Google Maps failed him in Valladolid, even though I had a physical map of the city’”.

Matthew, on the other hand, remembers a similar dilemma in Mexico, which made him realise she was the one. “Maybe it’s something about getting lost with someone in a strange place that really secures that bond, but sharing so many new experiences, foods, liquor, and culture, [I] really wanted me to continue down that path,” he said, adding that any time apart is unbearable. The longest they’ve spent in separate places was two weeks.

“The great firewall of China was very difficult for us. Not only was the time difference tough, but communication next to impossible. Laura eventually was able to use a VPN service, but man, was it tough!” Matthew shared.

It was during one of these times apart that he planned the proposal — a typical weekend date at a hotel on the coast — making sure to adopt some of what he calls her best qualities as the romantic who obsesses over doing the research to plan their next milestone.

“It is her attention to detail that can really make a difference in communicating a specific tone or mood. A lot of that I have learned from her and continue to learn. I took the opportunity to ask her parents for their permission while she was in China, and on her return, I had booked a stay at the Half Moon Hotel under the guise of a late birthday celebration. I planned everything for days, sorting the fine details with the staff at the hotel, and the restaurant snuck in our favourite Turley Zinfandel wine and booked a photographer with a telescopic lens. I was a nervous wreck, and all the prepared lines went through the door. When I asked Laura if she wanted to take a special photo, she thought that meant a selfie, and that’s the moment I went down on one knee and asked her to marry me,” he shared.

They were both sanguine about a future together and when it came time to take each other’s hand in marriage, it was not about the I do’s. It was ‘let’s stay together’, which just happened to be the title of the Al Green hit selected after much deliberation for their first dance as The Budrams.

“I haven’t had much time to reflect on how different my life is or will be now that I’m married. The biggest change thus far is going from being called ‘Laura’ to ‘Mrs Budram’. I’ve always been committed to Matthew and have for a very long time felt like he was my other half. Marriage definitely feels a lot more than a legally binding agreement,” Laura said.

Matthew added, “It doesn’t feel much different than before. We had begun planning for a life together from much before, so this feels like a continuation and a formalisation of those plans. Both Laura and I are fortunate to have role models in our parents and have been able to see them handle tough situations together as a unit. I believe we see similar qualities in each other and look forward to our future together.”

Laura and Matthew tied the knot on July 17, 2021, at the Craighton Estate in Irish Town, Kingston. They both felt a garden wedding in the hills suited their personalities. The colours were green, ivory, blush, and gold which matched the beautiful pink house at the venue. The wedding party got dressed a stone’s throw away, at the Strawberry Hill Hotel, all of this captured by their photographer, Corey Hamilton.

Originally, they had envisioned a wedding day in December 2020 with 100 guests, but those plans were brought to a halt. With the help of their wedding planner Kimberley Dunkley Watkins of Dragonfly Experiences, who, they say, “ran a tight ship”, they were able to see the vision for their July 2021 nuptials.

“It was always our dream to have a beautiful wedding that saw our friends and family together. We had to make the difficult decision to either proceed and have an intimate wedding with just immediate family or postpone. We are so happy that we chose to wait.”

Even in the midst of the pandemic and with a reduced guest list, the bride and groom were able to celebrate their big day, albeit in a smaller fashion, and a reliable streaming service was secured to share the special day with those who were unable to attend in the flesh.

“We know that we have both chosen to commit to each other and that our relationship is worth the extra effort. Aside from Matthew being very charming, engaging, and an extremely well-read man, I must say that what I most admire and appreciate is his dedication — his dedication to his family, my family, his work, his passion projects and to me,” Laura said.

There is so much these two have shared that has strengthened their relationship but “family is the blessing that keeps giving. Getting married means you’ve now joined another family, and so far, it’s been great. If you watch the video of our wedding, there’s a permanent smile on my face (or laughter) throughout the ceremony and reception. We had been waiting for the moment for so long that I was very happy to share the moment with everyone. It really was a joyous moment for me and it’s seared into my memory forever”, Matthew assured.