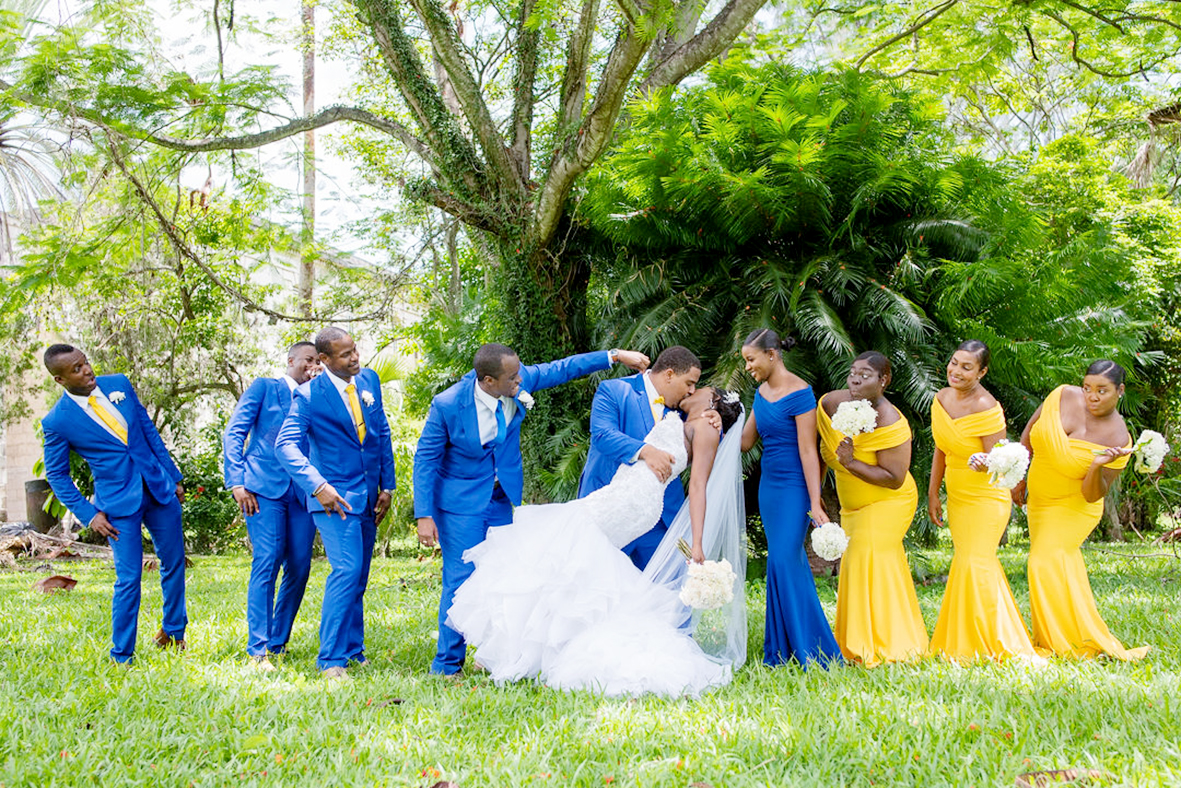 Jordan McCallum and Rochelle Johnson first saw each other during their first year of law school at The University of the West Indies, Mona campus. But they never had the chance to interact because Jordan travelled to Barbados to continue his studies, while Rochelle remained on the island.

The two attended Norman Manley Law School but didn’t truly meet until they did an internship at a prominent law firm. “I couldn’t build up the courage to approach her for the first time we ‘met’, so thankfully, she approached me one day after work, and that’s how we ‘met’ the second time,” he revealed.

Her first impression was that Jordan was funny, very sweet, and possessed an infectious personality. Rochelle was such a refreshing ray of sunshine; he thought to himself, “This pretty girl never looks sad whenever I see her.” He kept her smile glowing on the first date when he invited her out to a nice restaurant for pizza. They finished the night at Devon House indulging in her favourite dessert: ice cream. “It was great. We spent the entire night chatting away until the security told us they were closing. And it’s become a thing with us that we close everywhere that we go,” she said.

Two years into a beautiful friendship, Jordan appealed for an upgrade. His subtle arguments turned into an overt confession: he was guilty of affection. When Jordan asked her to be with him, Rochelle was scared because she didn’t want to lose her best friend. He gave her a date by which to respond to his request – August 8, 2018 – and she did. “I didn’t have to think twice. It was so easy to make up my mind and be with him that I immediately realised he was the one I had been waiting for,” she said.

‘HE ALLOWS ME TO OPEN UP’

She considers Jordan the cement and blocks of their relationship. Keeping them grounded and fuelled for rocky roads, he is the real MVP (most valuable player). “I can be very closed off, and it is difficult at times for me to express myself. Jordan has allowed me to open up a lot more and get in tune with my feelings. I am usually very black and white, but he lets me see life with so much colour.”

Jordan speaks highly of her beauty, intellect, and hard-working, responsible and caring nature. He is happy that she is able to balance his carefree spirit, keeping him grounded and focused on the right path. She even inspired him to conquer his own fears. At age 19, Jordan was in a car accident and never got back behind the wheel. He was both insecure and embarrassed about the ordeal and its side effects. But Rochelle motivated him to face his fear.

“One night, when she came by my house, she asked me to exchange places so [that] I would be sitting in the driver’s seat. I took a drive around my small community and then around the block. Over the next few months, I relearned how to drive, and then before the year was out, I bought my first car,” he said. He added, “But it was that night with her that gave me the push I needed. Nowadays, I do most of the driving, and on almost all our trips, she says to me, ‘You look good in the driver’s seat’.” Jordan knew then that he wanted the love of his life to be his wife.

Unlike the first date, the proposal was a complete disaster, according to the couple. He had his heart set on a grand yet sentimental dinner at the AC Kingston Hotel. The plan included getting a charm that said ‘I can’t say I do without you’ for Rochelle’s Pandora bracelet previously gifted by him. But nerves got the better of him, and he was covered in sweat. His lady love grew concerned, but he unsuccessfully played off his jitters.

Once they were served the appetisers, he took her by the hand and said he had a small gift. “As I went into my pocket, the box got hitched and wouldn’t come out. When I finally wrestled the box from my pocket, the Pandora charm rolled out and went under the table. She kept asking if I needed help as I awkwardly fumbled for the charm.” After retrieving the charm, he handed it over to her with a trembling hand. She took the charm but could not read its words because she was not wearing her glasses. So he proceeded to go on bended knee.

“Much like the Pandora charm, the speech I had prepared flew right out of my head, and I could not remember what I rambled. But in the end, I asked her to marry me, and she said I do. To this day, we laugh at what a complete disaster it was,” he added.

The engaged couple went on to plan their own wedding. The pandemic made planning more difficult than anticipated. The happy pair said it was all worth it, from a cut in the guest list to the time changes, all in keeping with COVID-19 restrictions.

On August 28, Jordan and Rochelle were joined in holy matrimony before God and in the eyes of close family members and friends. The ceremony took place at the UWI Chapel, and the reception continued on a high note at The Jamaica Pegasus hotel’s Talk of the Town.

The newly-weds both agreed that the significant occasion was great. The groom’s best moment from the main event was watching his beautiful bride walk up that aisle, knowing in that moment that they would begin their journey to forever. The bride was elated that the wedding was everything she had hoped for and more. Walking into the reception and being greeted by close friends and family for the first time as Mrs McCallum holds a special place in her heart.