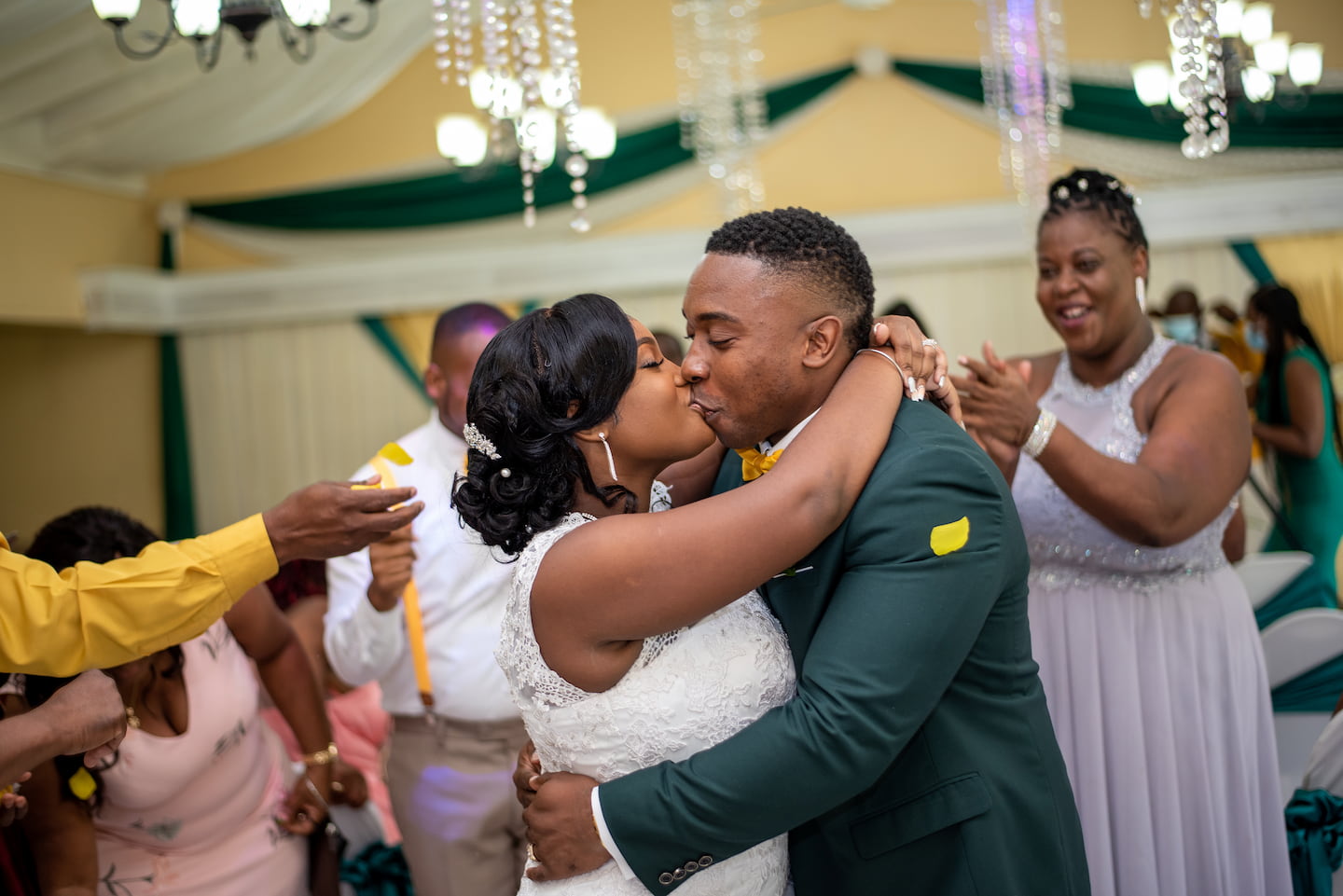 Samantha Jones and Kenardo Morgan first laid eyes on each other in 2012 while attending Mico University College. Samantha was in her second year at the time, and Kenardo was in his third. They might have been pursuing their studies in education. Love, however, proved to be their greatest teacher.

Affectionately called Sam by her now beloved, Kenardo quickly became the object of her affection. “I had a huge crush on him to the point where I would literally feel butterflies every time I see him, or I would deliberately go to the places on campus that I know he would usually be. My friends would say, ‘Sam, see your man over there. He’s coming’,” Samantha told Island Wedding. Kenardo recalled their official meeting at the Eli Matalon Gymnasium. This, he says, was the start of intriguing exchanges via social media. They got so close that they shared an enchanting kiss on the Buxton building sometime after.

But there was a setback: he wasn’t as rooted in faith as she was. “Though I liked Sam very much, she asked about my walk with Christ and made it clear she was a Christian. ‘I’m not where I want to be’ was my response,” he revealed. The disappointment didn’t deter her attraction, but he wasn’t ready for a serious relationship “with such a beautiful soul. I started to keep my distance, though not disclosing my reason.”

They remained casual social media friends who occasionally communicated until Samantha transferred to the University of Technology in 2013. They subsequently fell off each other’s radar.

Fast-forward to 2018. An enquiry into when he would be able to join Samantha on one of her many road trips landed Kenardo back into her life and her heart. “We did our first excursion as friends in 2019, not knowing that he would be the one for me,” she added. This still didn’t seal the deal.

After a few months of almost no communication, her phone rang, and it was Kenardo on the line. “It was like an instant reconnection. We started communicating more, getting to know each other, and by doing so, I said, God, this is the one! This is it! I’ve always asked God to show me ‘the one’ for me and didn’t even realise until now that God was preparing, refining, and perfecting Kenardo for me.”

By early 2020, conversations got even more interesting. He found himself falling in love with her mind and how she approached various issues. “Sam would answer the questions I had in my mind before I asked. I would speak about this mystery woman to my colleague and fellow counsellor at work. She would often say, ‘Morgan, she is the one for you’,” he said.

He grew closer to God, so one day, he turned to the Lord in prayer and asked Him to show him his soulmate. He saw Samantha clearly in a dream and has never looked back since. Close to a year later, the man of action planned and purchased an engagement ring. And after receiving a confirmation when they were singled out at a church service, he proposed that same night at home.

“I knew a proposal was coming, but I thought it would be for my birthday. But he was planning it from way before that. He was gearing up to make it a huge surprise with my friends, but that church service compelled him to make a move now. He said, ‘Sorry, Sam, but mi cyaa wait nuh longer’,” she reflected.

With approximately six months until their wedding day, the couple went ahead and booked everything for their big day. From finding the venue to choosing the menu and securing all the other nuptial requirements like the wedding cake, photographer, emcee, and bouquets. In the latter stages, assistance was available for the décor and the programme.

On July 31, Samantha and Kenardo were joined together in holy matrimony at Pollyanna’s Caterers in Kingston. The beautiful bride’s long white wedding dress spoke to simplicity, elegance, and class. She treasured this valuable garment as it was her ‘something gifted’, courtesy of a dear friend who refused to have her wear anything rented. Her handsome groom was given the ‘green’ light and was suited for the happiest day of his life.

“Our wedding was glorious. Even today, it’s still the talk of the town, especially the part where we sang to each other. It was very entertaining. Our emcee, Dorian Harris, did a great job at the reception. The ceremony was very unique. The bridal party wasn’t introduced with any traditionally slow songs. It was upbeat. Everyone danced the night away and enjoyed every minute of embarking on this chapter as husband and wife,” the newlyweds said.