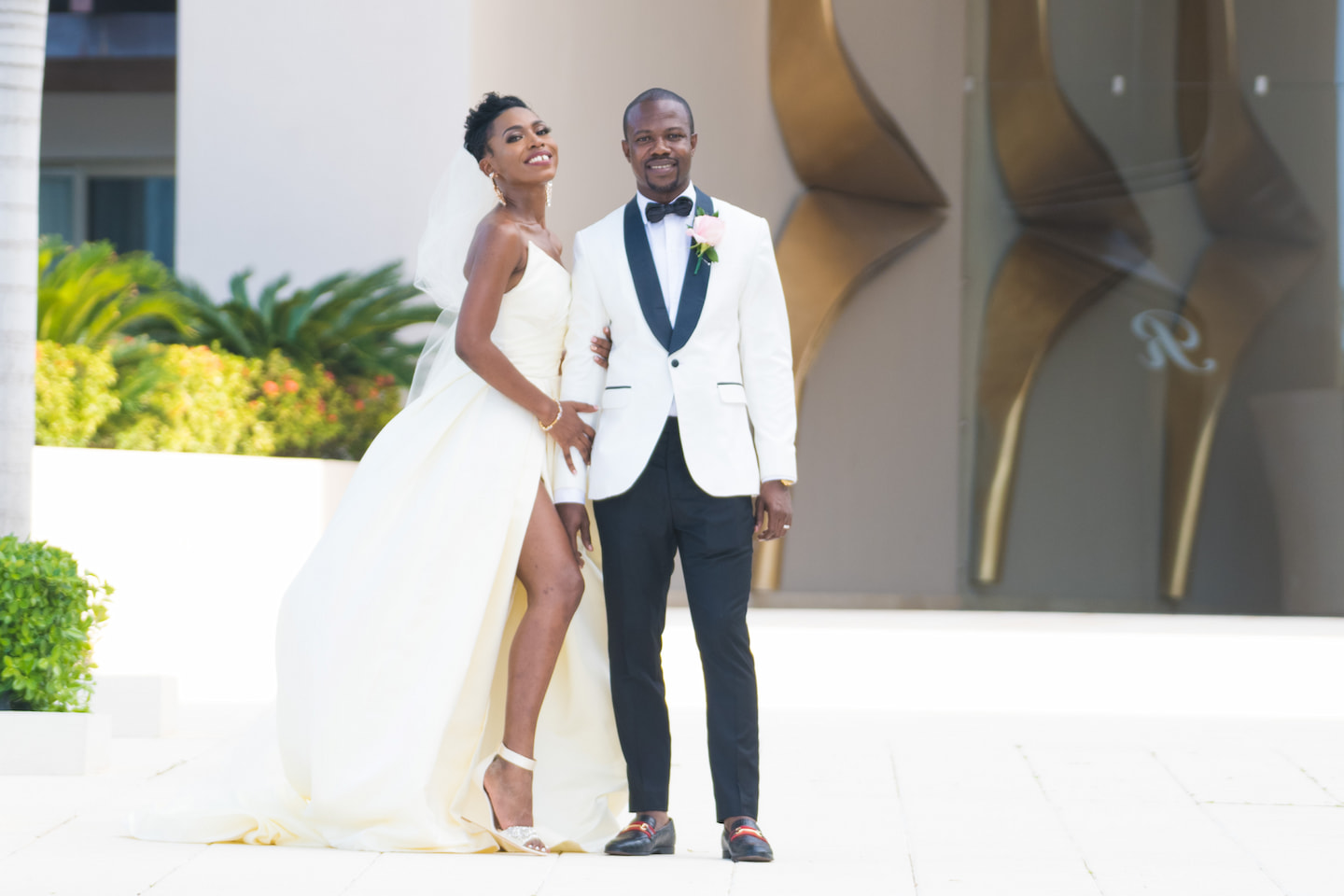 It was love by association for Omar Newell, chief executive officer of Rerum Trading Limited and Dr Nordia Thompson, chief resident of Emergency Medicine at the University Hospital of West Indies, who met by chance at a meeting held at The University of the West Indies, Mona Campus.

Omar was invited to address the Titchfield Old Students Association event back in 2013. Nordia, a medical student at the time, had just returned home from law school and was in attendance. She immediately caught his attention when she arrived late. “I gave out my BlackBerry pin with the hope that she would connect. One day, I saw a beautiful picture of her in my BBM timeline,” he told Island Wedding and decided to ‘shoot his shot’.

That action led to their first date, which, unfortunately, was disappointing by his account. He explained further, “I decided to take her to a spot a friend of mine had opened up in Barbican. It was horrible — music, food, everything was pretty bad”. He learned then that she had a good sense of humour, laughing off the ordeal as beginner’s bad luck. Some time after, the pair went on a romantic picnic at Hope Gardens, “I told friends that her fried chicken and lemonade sealed it,” he added.

After a few months of talking and realising that they couldn’t do without being in each other’s company, the two became an item.

Supportive, a leader, determined, courageous, and trustworthy, Omar is constantly present, offering Nordia encouragement when she needed it the most. “He has taught me once you have a dream, go steadfast and drive through to achieve the same. It has always been us every step of the way and never I. I was always reassured and saw actions of ‘we are in this together’ independent of the challenges. He has been a constant source of strength, emotional support, and validation,” she revealed.

Nordi, as she is affectionately called, has been the biggest cheerleader and supporter for her beloved since day one. Motivated to follow his dreams, he is given frank and critical feedback on pretty much everything. “She is my partner in every sense of the word,” he added.

Knowing that she was the one from that enchanting second date, he drove to Portland to meet and have a few beers with her father. He later put plans in place to ask the love of his life to be his wife.

On Valentine’s Day, the pair went to Couples Tower Isle to celebrate the special occasion. With a “delay” on dinner, they agreed to talk and walk. It was there that the proposal unfolded. “We came across candles arranged in a heart, and the photographer, who ‘happened to be there’, came up with a story that we were randomly selected for some photographs. We walked closer to the candles, where there was champagne. She thought some lucky person would be proposed to. I was the lucky person who got to propose to her,” he shared.

Nordia confessed that it was the perfect surprise, “just the two of us on the beach under the moonlight”.
Leaning on support from friends and Royalton’s wedding planner, Tamar, along with the team — their nuptial dreams became a reality. According to Nordia, the most anxiety came from planning a wedding during the COVID-19 pandemic, going through the constant revision of the gathering limits.

On June 19, Omar and Nordia joined hands and hearts in holy matrimony at Royalton Blue Waters, Trelawny, Jamaica. Beauty and elegance personified, the breathtaking bride stunned her guests in a mesmerising Cochen Bride custom design. Her handsome husband, classically suited in Spokes Apparel for the main event, could not wait to say I Do.

Much like the title of the song for their first dance by Ed Sheeran, the Newell wedding was perfect.