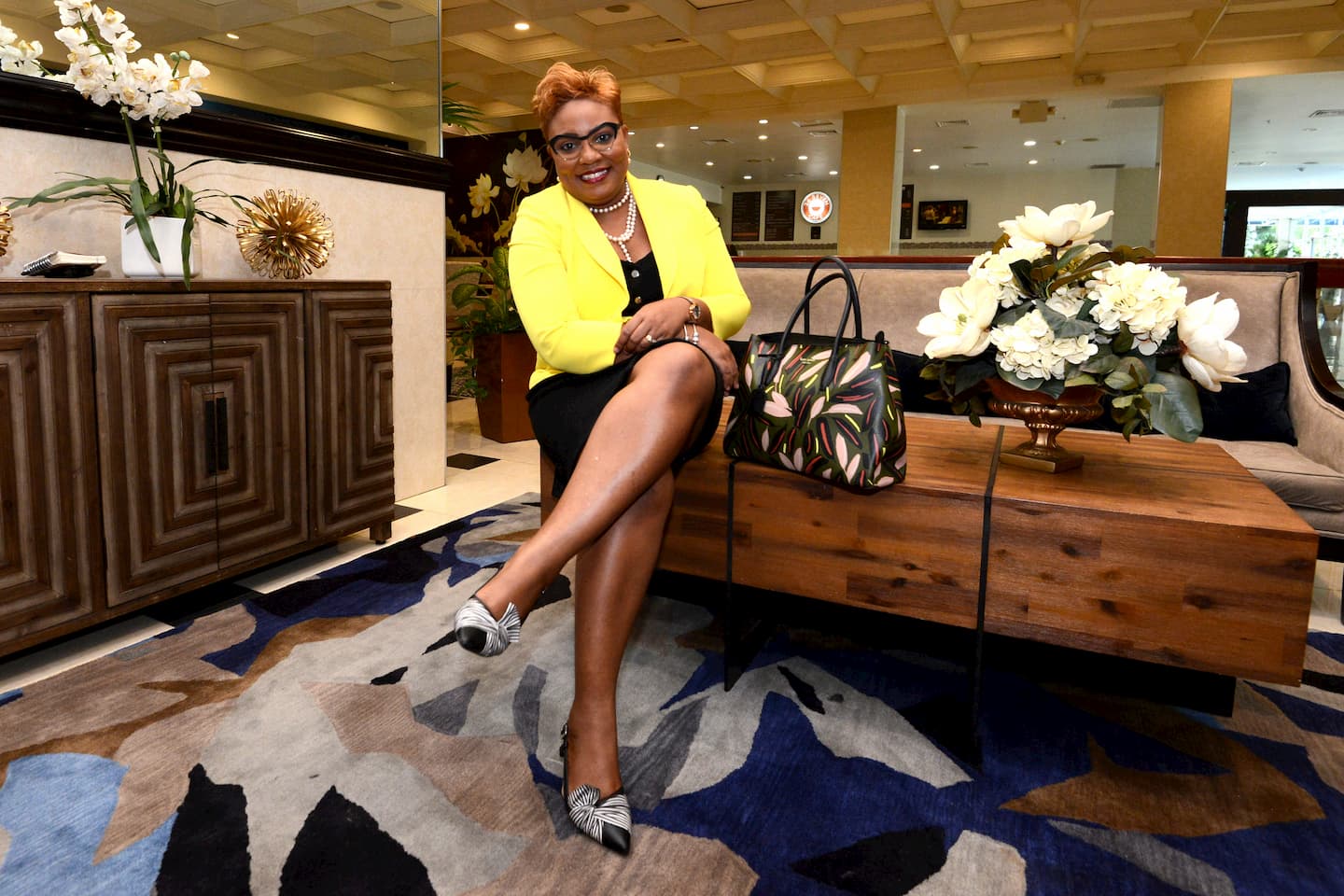 When she’s not ruling the boardroom in her role as the marketing, communication and sponsorship vice-president of Supreme Ventures, Gail Abrahams is taking charge of hotel lobbies with her bubbly personality and kilowatt grin. Abrahams quashes the notion that a girl boss has to be hard on the inside and outside dressed in her bright yellow blazer, standing out in more ways than one. Taking time out of her busy schedule should have been a problem, but Abrahams gave no indication that she was conflicted about being there. In fact, she looked up brightly and asked: “So where are we doing this?”

KATE SPADE FAN
Abrahams daintily walks around the large wooden coffee table and perches delicately on the edge of her seat in a duchess slant like a proper lady. Set beside her is her Kate Spade tote which she proudly displays, being a fan of the designer (rest in peace!). “It’s practical for the working woman so I follow the brand.” When asked how many she’d collected, Abrahams laughed in response, laying the blame of her collecting at her husband’s feet. It’s a modest collection, however, tallying in at only five (that she’d admit to). “I like the fact that the more you put in, the more they can hold. I tried to do the little shoulder bags and I couldn’t,” Abrahams griped. “They’re cute, but they’re too small!”

From her Kate Spade, she pulls the first of the clear plastic zip-lock baggies. “I’m a mom so I carry around mom stuff.” She giggles bashfully and places them on the coffee table. She’s the mother of two boys with asthma, so she’s got a medical baggie for them to take care of any bumps and scrapes during the day. After that, there’s a whole slew of things coming from the bag, reminiscent of Mary Poppins. Her glasses case which holds her extra pair of ‘funky’ neon pink cat-eyed glasses, something she wears when the mood or the outfit strikes. A make-up kit with her go-to nude and red MAC lipsticks and loose powder to keep the shine away, and another little baggie filled with her necessary toiletries, which features a hand sanitiser and hand lotion from nine-year-old entrepreneur Kailee Coombs’ hygiene ‘Kai Kit’.

Then comes the perfume, her favourite scent, with the sweetest story to go along with it. She brandishes the red bottle, it’s from the Armani/Prive collection in scent Rouge Malachite, an ode to Russian women of all things, but that’s on-brand for the collection. “When my husband and I went to Paris, we went to the store and they’d just released it. I absolutely loved it.”

LOVE AT FIRST WAFT
“We left the store, though. The next morning I woke and it was right there waiting for me. I don’t even know when he left.” He’d even got it personalised for her, so etched into the bottle with gold inlay is ‘Gail’ in cursive. She gingerly placed it on to the table.

Unsurprisingly, Abrahams had another bag she’d left at the office, which held her laptop and work essentials.

Flair gave her a challenge, she had to pick out the items she can’t live without, the absolute essentials, the stuck on deserted island things and put Abrahams to work. Picking her must-haves if she was forced to have a smaller bag with less space and no time to choose, Abrahams reluctantly went to work shaving down her totes contents to these 10: