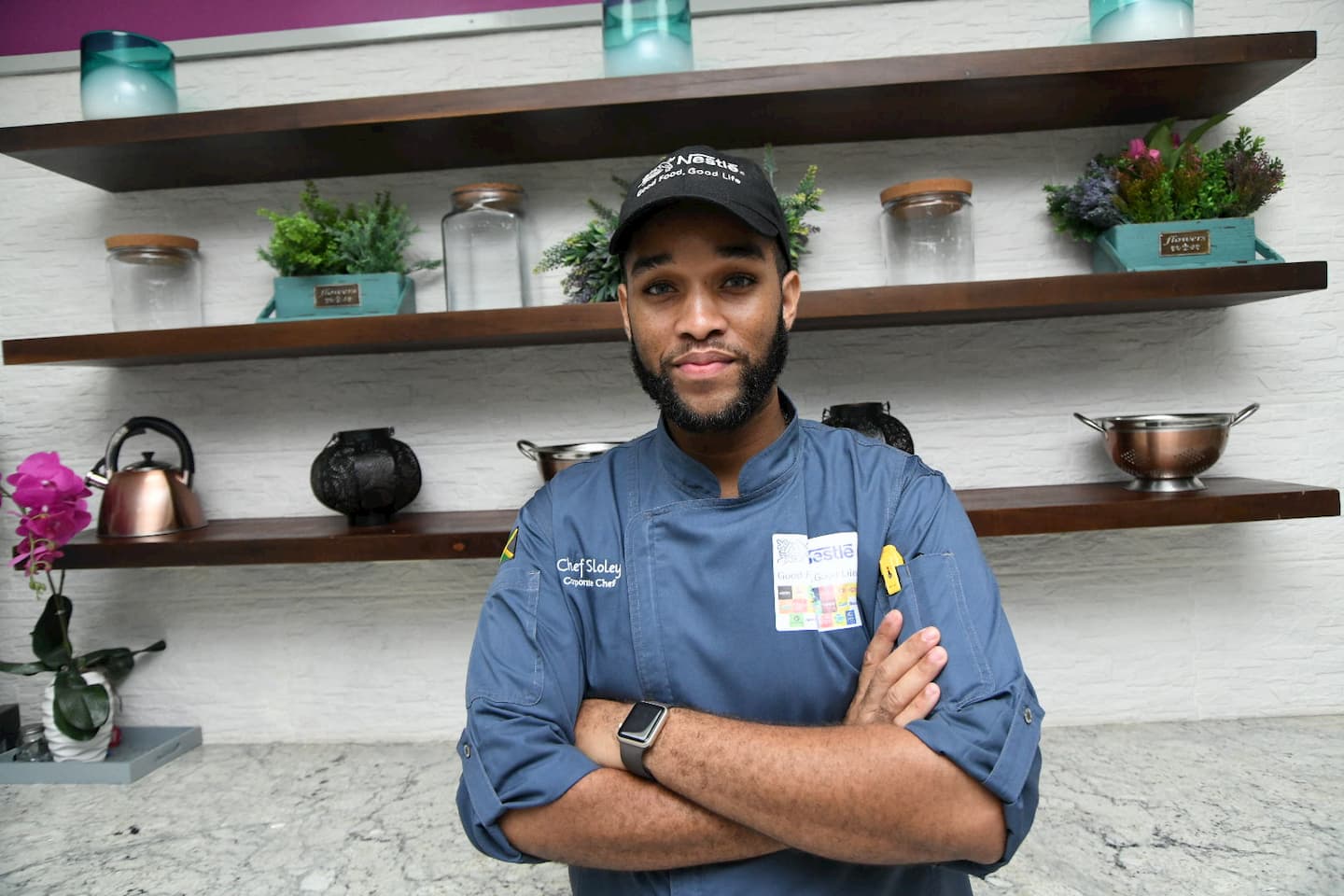 Turning up the heat in any kitchen is a feat like no other. Aside from the obvious talent of fusing seasoning and spice to make everything nice under fiery flames, others key ingredients behind the scenes include multitasking, organisation, precision, leadership skills and the ability to work well and create tasty masterpieces under pressure. Don’t believe me? Ask Nestle’s new chef, Andrew Sloley.

This rising culinary star has been ‘Sloley’ but surely cooking his way to greatness, and Flair visited him at his new home, Nestle Jamaica Limited, in Ferry Pen, to gain more insight into his fascinating life’s journey.

Sloley was first exposed to the kitchen at the age of seven. “We had a talent competition going on in church and I didn’t think I possessed any remarkable skills to put on display,” Sloley shared with Flair. But he wanted to bring his innate passion to life, so he decided to participate, showcasing his flair through the presentation of his very own cooking show. Because of his deep love for tin mackerel, he conducted a live demonstration of mackerel sandwich, yes, you read correctly, mackerel sandwich. In his demo of ‘Andrew’s delight’, he removed the sauce, adding mayonnaise, peppers, onion, garlic between slices of bread on show, to the attentive eyes of the congregation. “I think that was the start of it all,” he added.

Also, Sloley’s mother, who is a teacher, was always cooking up a storm, so he grew up around mouth-watering food. She owns and operates a cake catering company: baking and decorating wedding and birthday cakes, and while she took pleasure in his company, watching from his stool, he yearned for more culinary activity. She obliged, giving him the responsibility of creaming the butter and sugar. Eventually, he graduated to mixing the batter. “One thing she never allowed me to do was to decorate the cake, because she thought it was so intricate and detailed.” By the time he reached nine or 10 years old, his aunt encouraged his mother to let him enter a culinary competition. He won a bronze medal and came second overall in the island.

By age 12, the family was toying with ideas about what he should pursue. Sloley declared that he wanted to be an executive chef. But he was met by a disapproving look from his father, who strongly suggested that he become a veterinarian. The truth is, he loved animals as well. Born in Manchester, and growing up in Clarendon, he had his very own mini-farm. Cats, dogs, pigeons, doves: you name it, he had it. These birthday gifts might have been intentionally presented as a means to sway him into the animal direction. This became a viable option. His love for food, however, never left his side.

While attending Knox College in Clarendon, he made a wager with his father. If he achieved a grade two in his Caribbean Examinations Council level, now CSEC, he would go on to pursue a degree in veterinary science or pharmacology. He received a grade three and kissed his father’s dreams goodbye. By 2006, he enrolled in a joint programme between the University of Technology and The University of the West Indies, Mona campus, studying hospitality and tourism management while majoring in culinary arts and production. He graduated in 2010 with a bachelor of science degree, first-class honours.

He whet his culinary appetite, gaining experience at the Grand Lido Negril in Hanover and Big Cedar Lodge, Ridgedale, Missouri, USA, before he even graduated university. Upon completion, he ventured to Couples Resorts as a management trainee. From there, he jetted off to Buccament Bay Resort, St Vincent and the Grenadines, as the junior sous chef. He made a progressive decision to work with Mount Cinnamon Resort and Beach Club, Grenada, as the executive chef.

He tapped into the airline industry with Goddard Catering Group, Grenada, operating as executive chef and production manager. This whole new field of expertise placed food safety at the helm. “People love to talk about airline food. But safety first: if the plane landed, and there were no incidents as far as the airline food was concerned, mission accomplished.” Then he set sail to Holland America Line as the tournament chef. He attributed all of his opportunities to having good working relations with fellow coworkers, supervisors, managers and directors.

One morning, after doing his medical and gathering all the paperwork to get back to work, he got a halo moment, and decided that he would not return to the cruise line. Jobless, he began sending out applications. By chance, or in his case, by mistake, he sent one out to Nestle, via Caribbean Jobs, and received a callback the following morning. He did the interview and the rest is culinary history. “It has been a remarkable experience here at Nestle. It’s different, but none of my jobs so far has been similar. I have no idea in marketing, but I have taken on the challenge, to fuse that with culinary, testing the products as well as the recipe development, creating content around different brands. I want to ensure that Nestle, the products and services, is on the forefront and faces of everyone in Jamaica. ”

He is also excited about inspiring those who enrolled in the Nestle’s Young Culinary Talent (Yocuta) program, a six weeks internship geared towards certifying, developing, educating and creating opportunities for young culinary talents.

This story was originally published in the August 26, 2019 issue of the Flair.