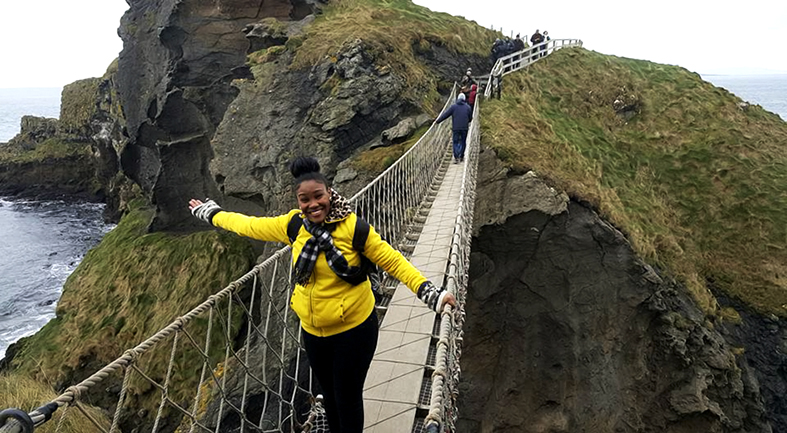 Stacking the memories with Sandrea

It happened two years ago but the memories could not have been more vivid.

It was the morning of my 25th birthday and to celebrate my silver jubilee, I had booked a return flight from  Manchester in the United Kingdom to Belfast in Northern Island.

After arriving in Belfast, I made my way to Phillip’s Belfast Bus Tour Company who I had entrusted to take me on a journey to some of Northern Ireland’s most popular tourist attractions.

The first stop of the day was at the beautiful town of Carrickfergus, where we got a chance to explore the 12th-century castle and see the ramparts stone walls and ancient harbour. I’ve seen a lot of castles in the United Kingdom but this was my first in Northern Ireland.

After a bit of walking and reading in the chilly weather, we made our way to the next venue – the famous Carrick-a-Rede rope bridge.

The daunting swinging board rope bridge which connects visitors to Carrick-a- Rede Island, is suspended almost 100ft above sea level.

Believe me when I say it was a daunting experience to cross the bridge, but even before I arrived at the end of the bridge, I was rewarded with stunning views of the ocean and breathtaking surroundings. It was also the perfect place for some excellent selfies.

After braving the rope bridge, I had worked up an appetite for a delicious treat. Our tour guide Phillip took us to the nearby Giants Barn café in Bushmills where we could enjoy a warm, authentic Irish meal.

After much deliberation, I opted to have an Irish Guinness steak pie with champ (basically mashed potato with chopped spring onions, milk and butter and vegetables) with a warm cup of my favourite British hot beverage – hot chocolate and whipped cream! It was scrumptious!

After lunch, I had a chance to sit in the Giant’s chair that was right outside our eating place. I was told by the shop owner that I could take a quick photo before the giant returns, so I did.

It was soon time for the venue I was waiting for.

I had visited it time and time again via Google, and now it was time to visit the alluring Giant’s Causeway.

The Giant’s Causeway is a World Heritage site which is made up of 40,000 interlocking basalt rocks formed from an ancient volcanic eruption.

None of the images residing in my head prepared me for such wonder.

It was by far Mother Nature’s finest artwork. It is almost as if she meticulously sculpted each of these 40,000 interlocking polygonal basalt rocks by hand then strategically placed them in their position to overlook the vibrant carolling sea.

I stood in awe as I watched how she deliberately used these ash-kissed stones to form footsteps and hills of various sizes to aid her visitors in navigating her grandiose masterpiece. For a trip that was way out of my comfort zone, there was nothing uncomfortable about it.

Not only were the sites more than I could ever imagine, but my day trip was also simply perfect.

I safely returned to Manchester later that night and I could not have been more pleased about my day.

It has undoubtedly been the most unforgettable travel experience I had, while pursuing postgraduate studies in Manchester.

Story and photos by Sandrea Clarke