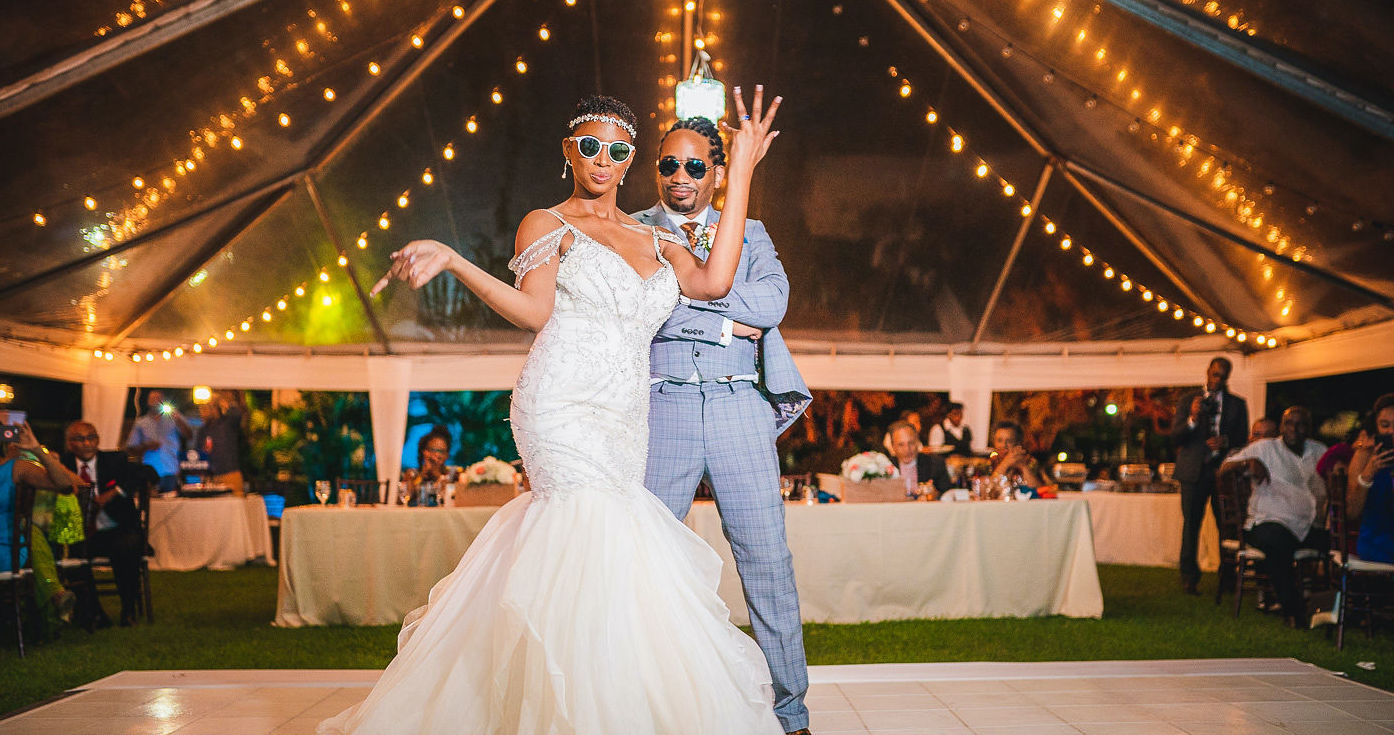 The art of love with the Elliotts

When he first laid his eyes on his beloved in the love month (February) of 2014, she was attending his sister’s concert. Art therapist Lesli-Ann Belnavis-Elliott told Island Wedding that she was already acquainted with everyone else in the family, so Michael Elliott rectified being a stranger by introducing himself. The painter and photographer decided to also make up for lost time by showing her some of his artwork. She was fascinated and would forever be connected to him through their shared passion. That, right there, is the art of love.

This couple is actually no stranger to Flair. In fact, the dynamic duo was humming happiness in Take-Two late last year, gearing up to say ‘I do’. Now, Island Wedding brings you their nuptial happily ever after. But just in case you missed it, let’s catch you up.
Michael was mesmerised not only by Lesli-Ann’s height but by her striking beauty. She quickly became the object of his affection. In swift action, he plotted to make his move. Reconnecting with her in the online world, they spoke a great deal about art. Lesli-Ann kept things casual and platonic, but Michael yearned for more. One day, he mustered up the courage to ask her out to Devon House, where sparks first flew for him. She accepted the invitation. That was all the motivation he needed. They haven’t stopped communicating since then.

Lesli-Ann knew from the initial dating stage that he was the one. “We went walking up Mountain Spring. On our way back down, he offered to get me coconut water from the jelly man. As I sat on the bamboo seat just basking in the night air, observing the ‘peenie wallies’, I exhaled and said, ‘Wow, this is nice. I haven’t done this in a long time’. He calmly turned to me and said, ‘Well, Lesli-Ann, you have to absorb persons’ emotions daily, and that must be taxing on you, so you do need a break every once in a while’. That sealed the deal for me as I saw his heart,” she confessed to Island Wedding. Michael knew she was the one months after meeting her, ironically, at the location they were introduced and had their first date.

Both are creatives and artists at the core. She pointed out that they both have their quirky moments. Their ambitions, however, manifest in different ways. “Michael is calmer, so he will retreat and process his plans internally, then, when the coast is clear, he will execute. I will take my time, discuss, and share; I am more expressive with my process. But we understand each other’s styles and complement each other,” she told Island Wedding.

Loving her creative spirit and unending support, Michael agreed that they are both creative, as photo and art enthusiasts, but are spontaneous, humorous, and adventurous, too. “We are different in how we may approach some creative decisions, but we both get good results. Also, Lesli-Ann tends to be more detailed on the planning side of things, while I am more practical and hands-on,” he added.

“I had the help of friends (my bridal party, Camille, N’Gina, and Stefanie) and family and then used a planner, Kaysia Johnson Vaughan of Agape Events Limited. Mike and I are creatives, so there were elements that we did ourselves. Mike painted the head table’s backdrop. Also, a good friend of ours, Stephan Clarke, built our backdrop and seating plan. A nice touch were the keepsakes, lovingly made by Sheryl Baptiste. They were Jamaican wedding cakes formed in the shape of paint palettes with paint and paintbrushes, placed on mini easels,” she reminisced.

On November 30, 2019, at the significant place where they first met and had their first date, the two celebrated the art of love by becoming Mr and Mrs Elliot. “We wanted our wedding to be rooted in spirituality, family, fun, art, music, and dance,” Lesli-Ann said. And their dream became a beautiful reality.

The dashing groom had this to say: “The wedding was a very magical affair. It was all that I imagined it to be, a lovely day. The symbolic artistic ideas were very much appreciated, and it really represented us and our creative spirit. The best moment, for me, was at the altar when we were painting the tree in the ceremony.”

The beautiful bride had too many memories to count: “Our vows were tear-jerkers for guests, where, in true fashion, we both had a play on words and spoke of our commitment to each other using art references. During the signing of the registry, Mike’s sister, Emily Dixon, played ‘Is This Love’ on the cello, a song that she sang on the day that Mike and I met. I really loved that. And I enjoyed our first dance as that was a hit. It had guests railing up because they did not expect the choreography.”

“We would like to thank all of our family (Belnavis and Elliott) and friends who participated and made the day extra special to us. We thank Devon House, Fernandez Barrett Photography, Bliss Bridal, Ramoy Rodrigues, Stephan Clarke, Mapco Printers, Mellissa Holbrook, Sheryl Baptiste, DJ Lance, Trudy Francis, and Dr Nicholas Bromley for MAKING our day, both incredible and memorable,” the newly-weds declared.