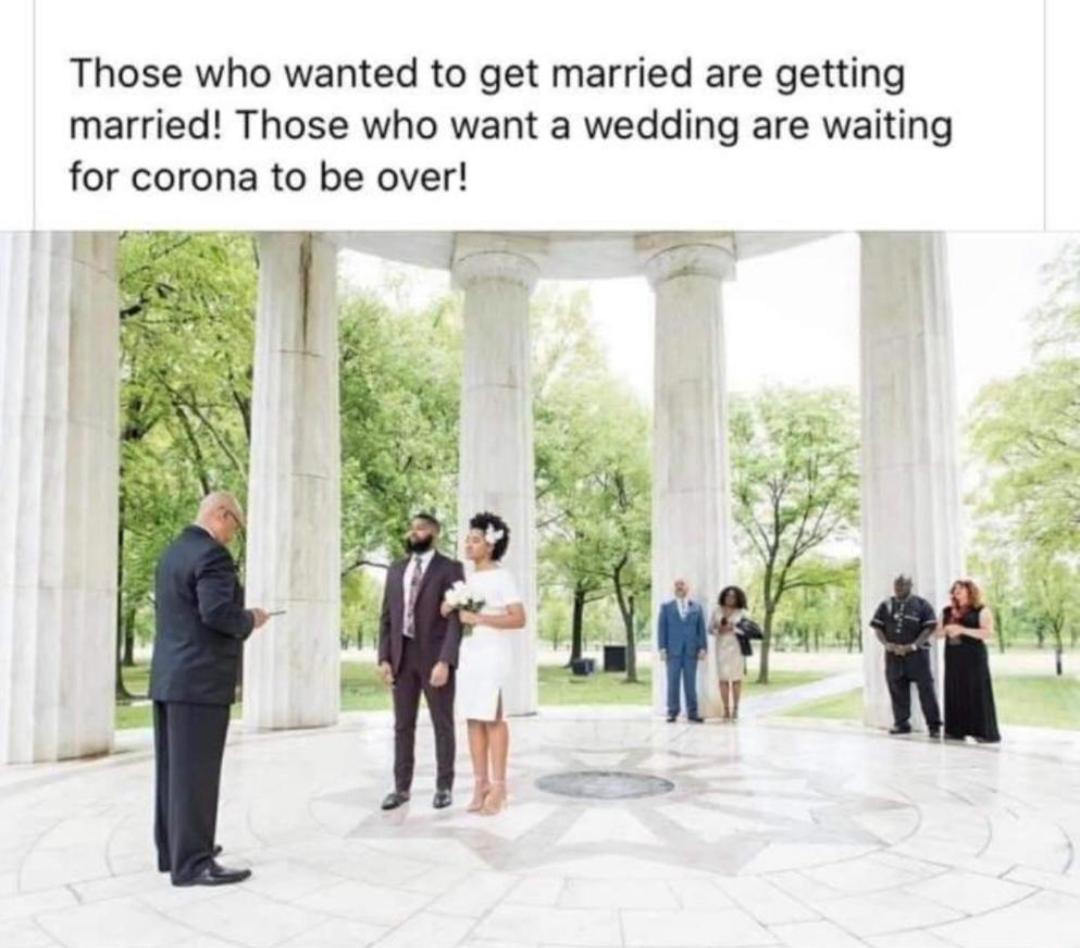 With just about everyone staying safe one of the only sources of entertainment readily available is browsing social media. Upon exploration, I came across a meme depicting an intimate wedding comprising parents, witnesses, the bride and groom and the pastor. The caption read “Let this sink in: “Those who wanted to get married are getting married! Those who want a wedding are waiting for Corona to be over.” That gave me a question? Is joining in holy matrimony so black and white?

I immediately went off on a tirade, advocating solely for the choice made by the bride and groom. This is a rough time. And it can be physically, mentally and emotionally draining on couples. So if they wanted to go through with it and celebrate their love; congratulations. If it is within their desire to wait, then they have the right to postpone the festivities, if they see fit. But I’m merely an unwedded wife: the material fits, just waiting on the timing of a specific tailor. So I enlisted the expertise of those who have the first-hand experience in making such significant decisions: married women.

According to Sasha Miller, this is the best time to be getting married. “You don’t have to go through the guilt of not inviting people. And by guilt, I mean you will want people to come to your wedding but your budget cannot facilitate a big guest list.” The wife of almost six years revealed that she adores the concept of just the bride and groom, the two witnesses and parents, along with those that are very close to the couple. “This way, you don’t have to spend money on a reception. If I were getting married now, I would have my wedding quickly and not think about the big shebang,” she added.

Zanya Henry-Cruise agrees, sharing that during the time, a high celebration can be planned for a later date, “I think what the picture was trying to depict is that the celebratory part of the wedding can be done at a later date. The photo also shows that the ceremony of exchanging vows can be done quite intimately and the celebrations can be executed after.” Henry-Cruise, who will soon be celebrating her fifth anniversary, continued by saying, “People need to separate the wedding from the marriage. One is a celebration and the other is for a lifetime. I don’t mind this; it takes the pressure off a lot of things like finding a white dress. You shouldn’t let a pandemic stop you and this is going to be a new normal for a while so if you want to get married, I say just do it.” This generation, she remarked, is breaking the norms and doing things in a non-traditional way. As long as the support is there, physically and virtually, then it shouldn’t matter if a wedding is big or not, “If the couple wants to celebrate this way, then go right ahead.”

Rochelle Hayles who tied the knot four years ago revealed that if she had to choose between having a small wedding or putting it off for a bigger celebration, she is all for the former, “I’m getting married! We can Zoom in anybody who would like to be present, and family can stand or sit six feet apart.” She understands that the wedding is for the family. But she would be intent on getting hitched to her partner “til death do us part on the date we set six to nine months in advance. We can have a party after for friends to celebrate with us, which would probably cost way less than the full wedding.”