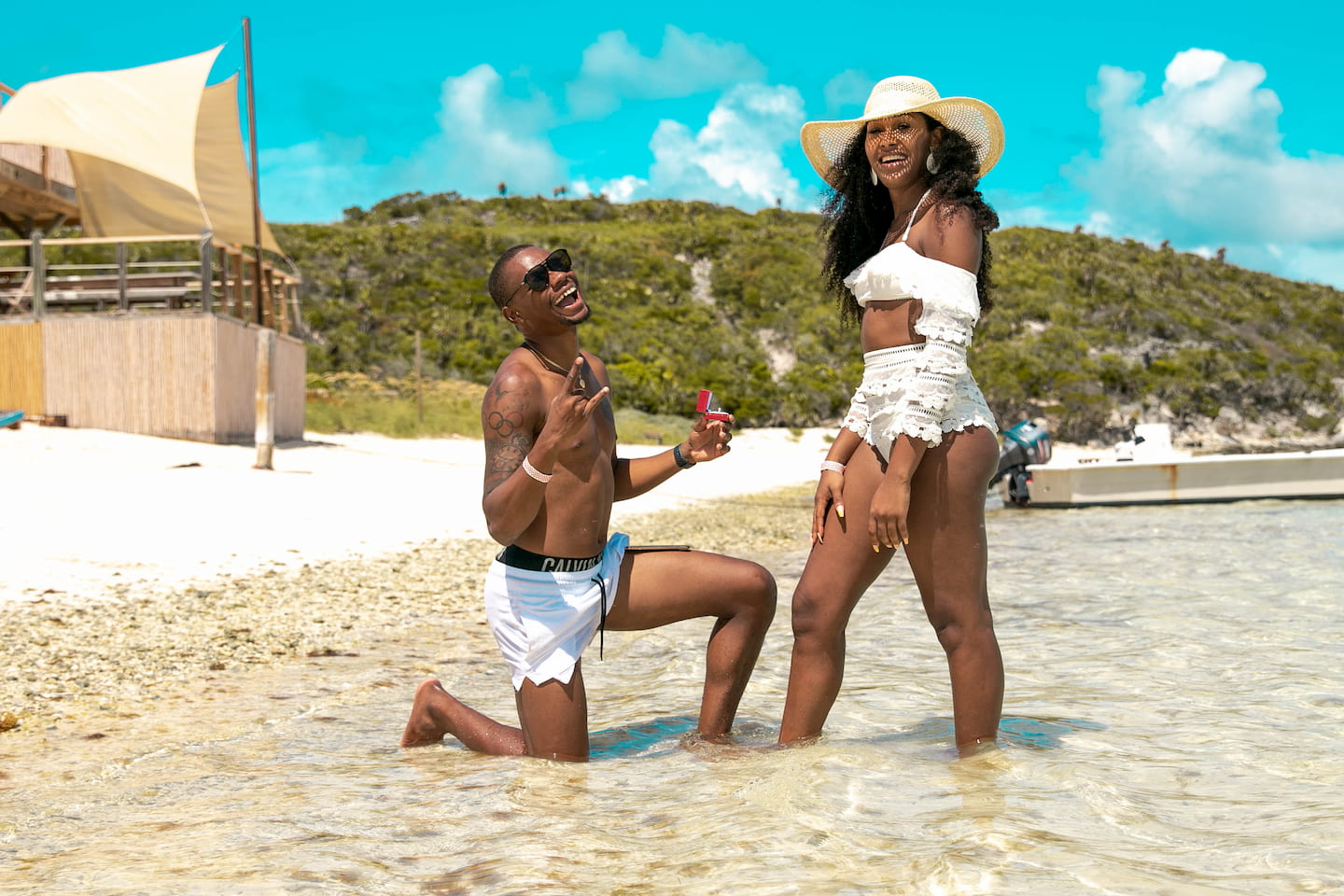 It was during the final lap of summer in 2014 when Warren met Alexan. Lexi, as she is affectionately called, was out celebrating her birthday with friends when she saw the track star at Taboo nightclub in Kingston. He was a fan, and asked for a ‘selfie’ after seeing her often on social media. “We just happened to be in the same section vibing,” he added. Who knew sparks flew? Secretly, Warren did, admitting, “I was lovestruck and had a crush on her, but we never met physically,” until that night.

“He was my groupie and he wanted a pic,” Lexi added with a laugh. She knew that he ran, but not much else. “When we started to hang out, I realised that he was very energetic and enjoyed the road as much as I did. We were always hanging out together within a group of friends and we just grew from there.” It wouldn’t be long before she was signed to Team Weir.

The cover shot of a magazine illustrating ‘Weir Engaged and Expecting’, along with the gender-reveal relay, the goal still being a mystery, had scores of Weir fans in a frenzy on social media, congratulating and celebrating with the happy couple. Flair is here to jump in on the revelry. Let’s Take Two and pick up where we left off with the love story of Alexan Stewart and Warren Weir.

Opting for the friend zone at first, the two spent their time playing video games and watching television together. They were also mindful to keep most of these interactions as private as possible for the first couple of months.

Both grew quite fond of each other, and continued to give tremendous support in all of their endeavours. His first lady was particularly moved by his consistent motivation and encouragement. “He helps to motivate me to reach higher levels. He’s always encouraging me to finish school because he didn’t and tells me to always put a dollar figure to my branding; he’s very business minded,” she declared. And Warren remained true in knowing that she was the one for him.

“It doesn’t matter what we’re doing, we always have a good time together. We finish each other’s sentences, we love the same food, and we just make things work. I would say we’re compatible. In anything we do, we compromise very well, too,” he revealed.

During the final leg of the summer season in 2019, on the very date he first laid eyes on his main prize five years prior, Warren beached up a romantic proposal. “It was really exciting planning it, although there was supposed to be a hurricane coming in the Bahamas and I was concerned about that because it was a surprise vacation and birthday celebration and proposal in one,” he highlighted. Lexi was thrilled to be spending quality time with her beloved, but the vacation did have its ups and downs. Misery entertained her company when her phone stopped working. And she was puzzled as to why Warren opted to give the tour guide his camera and drone. But then, the moment switched from bitter to sweet when he got down on one knee and asked her to be his wife. “It was everything,” she reminisced.

Artistic by nature, Warren was one step ahead, putting big plans in place to creatively express their joy, “I found inspiration on Pinterest for the magazine cover. And for the reveal, lots of sports-related reveals are always being done, but we went with a relay for obvious reasons. Her friend, Candice, ordered the confetti and we did it our way.” Since posting the cover and reveal, the outpouring of support has been phenomenal for the soon-to-be newlyweds, “We’re excited to be on this new journey. We have a lot of IG aunties and uncles already, which is great”.

Take Two asked the lovely couple a few questions about themselves and each other. This is where the real fun begins. Warren revealed that Lexi is more affectionate, while Lexi highlighted that he is ‘Mr Romantic’. Noting that his significant other is the corny one of the pair, she deemed him the comedian. Both crowned themselves adventurous and outgoing, but according to Lexi, Warren knows his way around the kitchen, “My rice and peas is to die for. I use extra coconut milk to make it special,” he boasted.

What is the best gift Warren has ever given you?

Lexi: Warren bought my first car. That was sweet.

What is Alexan’s favourite comfort food?

Warren: At first, it was tacos. She’d kill me if I didn’t buy the minced chicken and taco shells for her! Then it was mac and cheese for a while and now she’s just freestyling with eating everything in sight.

If your spouse had a superhero power, who would it be and why?

Lexi: Mind reading, because I feel like he likes to get into people’s head.

What is her favourite TV show?

Warren: There are so much, but I’ll go with her current favourites: Greenleaf, You, Pretty Little Liars, Devious Maids, and Client List.

What is one thing he can’t live without?

What are you looking forward to the most as new parents and newlyweds?

Lexi: Everything! From picking out the outfits, meeting our little one to family time and having similar colour schemes.

In your view, what’s the key to making a relationship work?