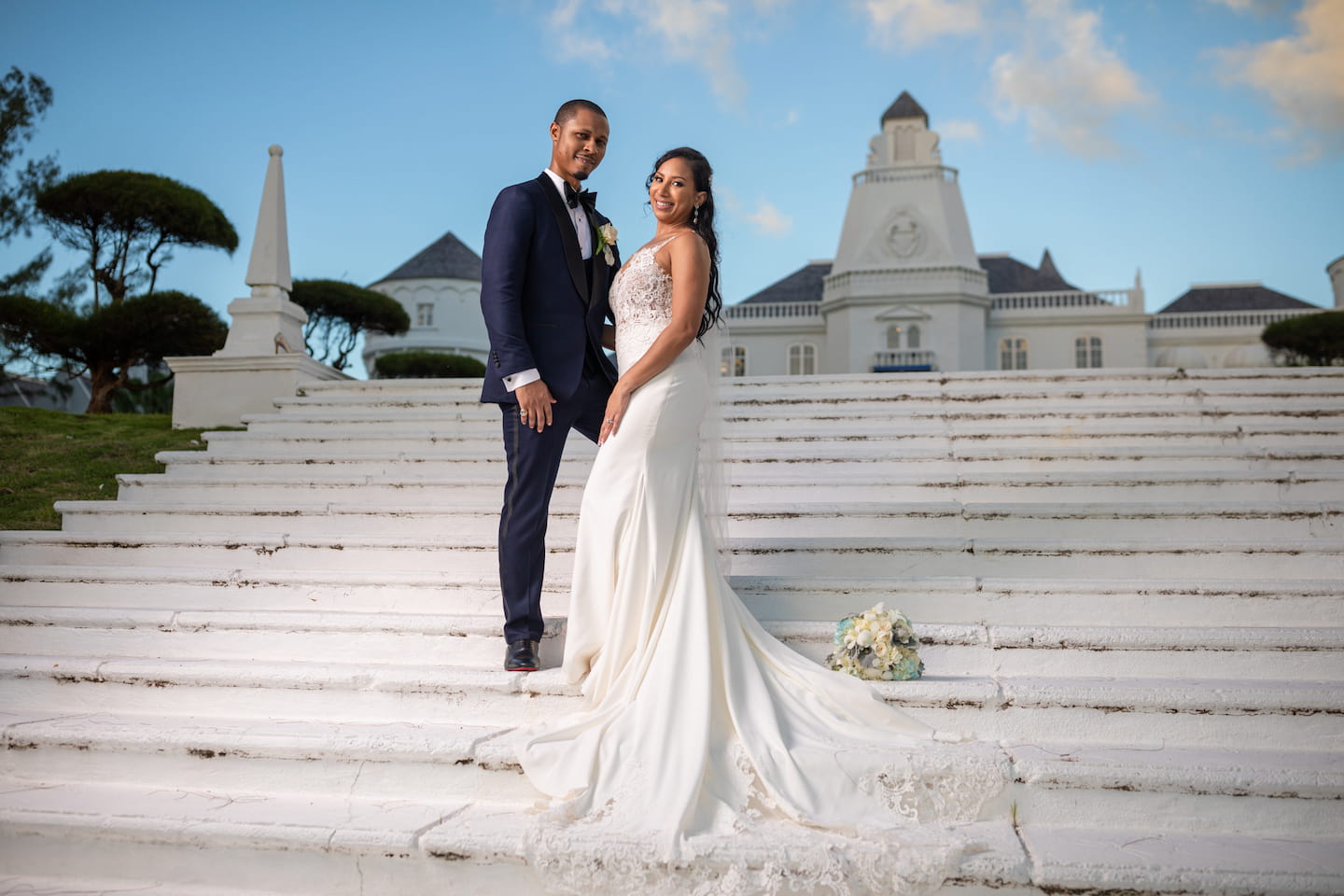 They say a picture accurately captures the character of the subject. This belief aligned perfectly for Melissa Robinson when she saw the love of her life for the first time in a photo. She told Island Wedding, “My first impression was actually from a photo a few weeks prior to our meeting. I thought he was incredibly handsome and his eyes intrigued me.”

Once she met him in person at a party in Miami, Melissa confirmed the feeling, as she was immediately drawn to his aura. “I ended up speaking to him while I was upset about something, and found a very natural comfort in his presence.” She did, however, remain cautious, considering that a part of her expected him to be the eternal bachelor type.

For Ricardo Gordon, the spark, intrigue and connection were mutual. A beauty, with a wonderful personality and a bit of spice to match, she possessed qualities that drew his attention within seconds of being in her presence, without being introduced to her. “When we first met, she was confident, strong and not intimidated by being in the presence of strong male personalities. While in conversation with her, I realised those traits were blended with a comical and witty side as well,” he said.

Melissa declared that it was obvious that he had done some research before the main event, paying close attention to her list of favourites. The pair went for a romantic dinner then Ricardo surprised her with a beach picnic complete with wine. “We stayed out all night talking with the melody of the waves and the soft glow of the city lights,” she reminisced.

By late 2019, after exploring their shared chemistry, the dynamic duo had developed a unique bond, outside of festive occasions and hanging out with mutual friends. “We both felt an initial energy that pulled us together but chose to live separate lives and maintain [a] friendship for some time until we had a serendipitous moment where we met after not seeing each other physically for a long time and faith had our lives interconnected ever since,” Ricardo revealed.

Determined, loyal, amusing, comforting and a hopeless romantic, Ricardo has taught his darling to take on a cruise-control approach to balance her authoritarian personality. “Once he commits to a cause, he knows no limits. He rides or dies for his loved ones, without question. Constantly full of jokes, the family man is a compassionate partner. He believes in love, and though he doesn’t always readily express it with words, he never misses a moment to let a gesture speak.”

Melissa is intelligent, kind, humorous and down to earth, says Ricardo. He not only admires her drive for excellence; he loves her for her strength as well, “She is a critical thinker, has impressive mental, physical and emotional fortitude, is known to be so giving to others, and is both witty and humble. She has made me complete, offering a voice of reason and stability, especially in challenging times.”

Six months of courtship later, Ricardo asked the love of his life to be his wife.

With delays on the ring and little to no places to set up a romantic proposal outside of the home, Ricardo decided to abandon grand plans of the ‘how’ and focus on the incredible sentiments of the ‘what’. Sipping on light drinks and enjoying each other’s company while watching a virtual carnival could not have prepared Melissa for what was about to happen next.

“She took my hand with the intention of guiding me to bed. I had the ring in my pocket the entire evening thinking of how I can make this special but couldn’t find a good time. I decided to go for it, however, I convinced her to take a random selfie in the middle of the living room from her phone with the timer on. I timed when it would flash and took a knee.” Melissa began questioning what her darling was doing until she realised the truth standing right before her. Submerged in shock and tears, she said yes to the question and there was, of course, the picture which captures the epic moment.

The bride-to-be enlisted nuptial assistance from Kara-Ann Anderson of Petal and Promises to smooth out the details on the home stretch of the planning. Prior to that, she pulled her vision to life with the help of family members and friends. “The process was burdened with constant obstacles posed by restrictions related to guest count and [the] curfew. We were forced to make numerous changes on a nearly weekly basis and ultimately saw our nearly 200 intended guests dwindle down to 40 of our closest family and friends,” she said.

On December 12, 2020, Ricardo and Melissa joined hands and hearts in holy matrimony to become husband and wife. The gorgeous bride said yes to the stunning Margo gown by Enzoani, radiating an effervescent light of elegance and glowing happiness. The handsome groom chose a classic tuxedo, and was debonair for the event. The specially invited guests gathered at Trident Castle in Port Antonio to witness the enchanting event. The newly-weds agreed that the wedding was absolutely amazing, exceeding their expectations.

“I felt like we were in a movie! Everything was so beautiful and genuine happiness filled the air,” Mrs Gordon reminisced, sharing that surprising her groom with a saxophonist and the magical first dance are among her wedding highlight reel. While Mr Gordon, the wedding felt like a fairy tale and motion picture all wrapped up in one. “The best moment for me was the ‘first look’, when I saw my wife-to-be for the very first time since 24 hours before then. I was floored by her beauty all over again. Overwhelmed with emotion, I was trapped in a moment in time where I was content to remain and nothing in the world existed or mattered to me, but her.”