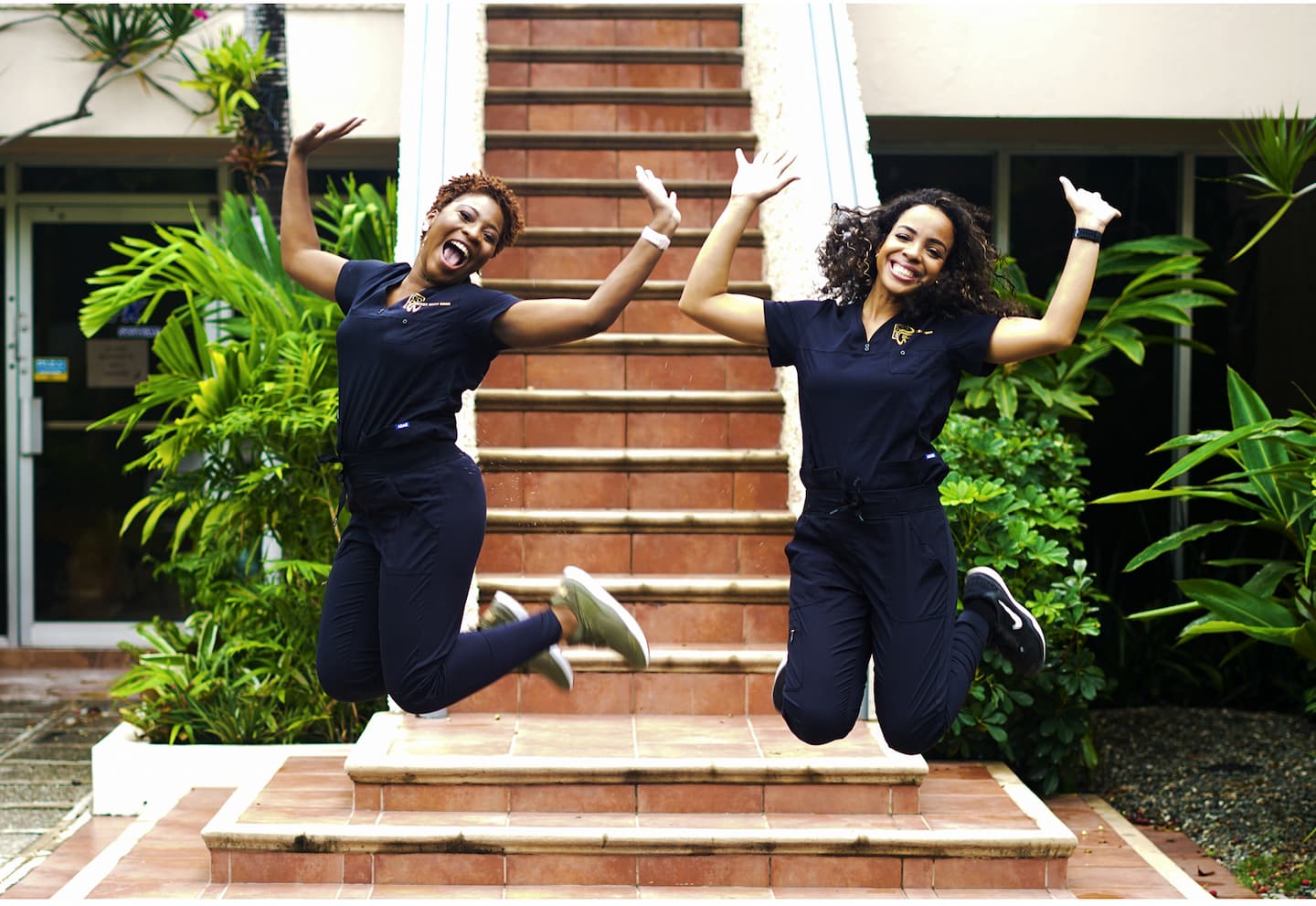 What started out as a ‘Don’t Rush’ challenge to ease the stress caused by the global pandemic, led to an unexpected business proposal and a shining partnership. Drs Roberta Dewar and Dania Loy Jones are the Dentist Next Door and Flair caught up with the young visionaries, who shared the journeys to opening their own private dental practice.

It was always Dr Jones’ desire to open her own dental office, with the goal to one day open a dental hospital. But she was comfortable where she was working. When COVID-19 came rushing through, however, it left a negative impact on the dental industry. The office was closed down. There were limited procedures, so finances were affected. She took the downtime to truly think about what she wanted out of life, and it was there that the Don’t Rush challenge emerged on the scene.

“Roberta, who was a year ahead of me in school, contacted me about the challenge and we rounded up a few of our colleagues for a dentist edition, which was a hit. Although we weren’t close, we realised immediately that we clicked and worked well with the organising aspect,” Dr Jones told Flair. The professional pair even started a four-week online series via Instagram Live called ‘Quaran-teeth’ together. There, they engaged in discussions surrounding dental care.

With that success, Dr Jones took things a step further by making a unique proposal that Dr Dewar could not refuse, “I asked her if she was interested in opening a dental office and she said ‘yes’, admitting that she was thinking about it but she was just nervous to ask her,” she said, as the two laughed in unison.

Dr Jones grew up with two lovely parents and three siblings in Kingston. She described her household as stable, noting that even though they weren’t rich, she and her sisters didn’t want for anything, “They provided for us and they wanted what was best for us.” When everyone knew or had an inkling as to what they wanted to be as an adult, she was still trying to figure things out. She was interested in the medical field and had a love for dogs, so the natural route to take was veterinary-related. But for most of her life, she was obsessed with teeth.

“It was the first thing I saw when I met someone. From a person’s smile, I know who they were. Also, I wasn’t comfortable with my own smile, I was closed off when it came to smiling or laughing amongst people, especially those I didn’t know,” she explained. Sucking her finger as a child contributed to the smile insecurity and when she enrolled in university, she got braces. It was there, according to the doctor, that her whole life changed. Her personality changed, and she wanted to create that change for others out there. So that’s when she decided to become a dentist.

For Dr Dewar, her dream growing up was always to become a medical doctor, until her mother encouraged her to pursue a career in dentistry, after finding out about the degree option. “With its introduction to Jamaica, that’s when I really thought about it for myself. So I switched and said I wanted to do that instead. I’m happy that my Mom steered me in this direction, because it is a better working niche for myself.” she said, having no regrets about making that decision. The third of seven children, Dr Dewar explained that her family, raised in Mandeville, Manchester, was very tight-knit by nature.

Knowing very little about dentistry, she did point out that her understanding was that the doctor restored smiles, which required some form of artistry in the mix. While in school, she wondered about what could combine her love for sciences and the arts. But it didn’t really click until dentistry entered the chat. “The career does encompass both of my interests. And it turned out to be exactly what I thought it would be, a perfect mix.”

The two enrolled in the new dental programme at The University of the West Indies, which started in 2010. Dr Dewar was among the first cohort, while Dr Jones was a student in the second cohort. The newbies admitted that they had to deal with the teething pains of what really worked. One area they are happy to report improvement in is the medical aspect of the studies.

The first two and a half to three years of the degree were solely dedicated to medicine; it involved nothing about teeth. And although they appreciated the imparted knowledge, because the mouth is a part of the body so everything is beneficial, it took too long to delve into what they signed up for in the first place: unearthing the passion of dentistry and dental surgery.

In 2021, the partners made it their mission to brighten smiles and put the’ care’ in dental care by opening the Dentist Next Door Ja. Located at 1 Norwood Avenue in Kingston, the dental practice is as the name suggests: a friendly way of catering to the needs of your mouth.

The benefits to opening their own doors include shorter working hours, the ability to curate schedules and having one-on-one time with patients who are either excited or scared of going to the dentist. The supportive staff are just as warm and amicable as the dedicated dentists. And the business has already been making quite a name for itself, breaking down the stereotypical doom and gloom of dental visits. “For me, it’s the satisfaction that we are spreading awareness and the importance of dental care. And I go home happy, knowing that I’m making smiles wider and brighter; that’s the goal,” Dr Dewar added. It is their hope to expand their business islandwide and engage in outreach initiatives that will bring dental care to every community.

In true healthy fashion, the dental duo shared tips for the general public: brush your teeth twice a day with a soft toothbrush in circular motion for at least two minutes. Floss at least once per day. Use a mouthwash daily, preferable with fluoride, to strengthen the teeth. Visit the dentist at least every three to six months. Try and strive for a balanced diet, “Go for breakfast, lunch and dinner. If you do snacks, go for healthier ones, like fruits, and not the stick candies that can get stuck in your teeth and cause cavities.” And make sure your medical health is intact because that can spill over into your oral health.