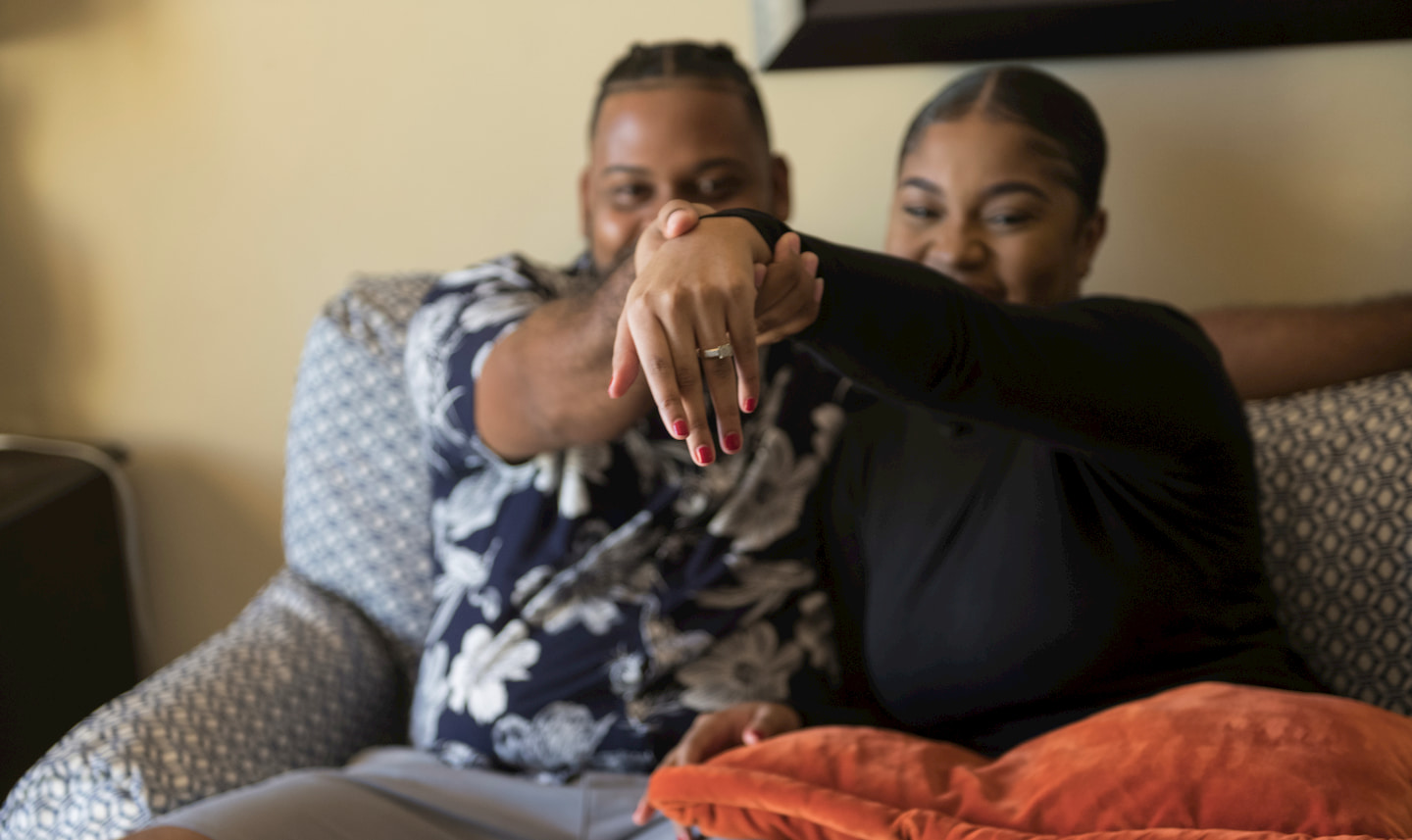 The hotel staff was warm and convivial in greeting, directing us to the deluxe penthouse suite. Upon entry, Kimberley and Hakeem were blown away by the luxurious feel of the room. Transfixed in euphoric comfort, the two cosied up on the sofa in the living room to share their unique story.

They first laid eyes on each other in the Phillip Sherlock Centre at the University of the West Indies. Mona Campus, during their UWI Pop Society days, over five years ago. But their first encounter was far from magical. The two orchestrated a symphony of laughter as they travelled down memory lane. According to Hakeem, his soon to be wife was a bit disrespectful in her first comments, noting that she rudely asked if he had washed his hair, which was blocking her vision at the time. He met her with disdain, but discovered that this was her approach because he was surrounded by girls. He took out his revenge by taking her BlackBerry PIN and not contacting her. A shocked Kimberley, who thought he was busy, decided to message him first. “From then, it has been us,” he added.

Flowing naturally into a relationship, they declared the official date as November 4, courtesy of Facebook. “We just chose a date, and set it via social media,” Kimberley shared. They remained connected throughout college and made a smooth transition into living together after they tackled the real world. Hakeem shared that it was a little harder for him, daunting to be cohabiting while loving his own space. Kimberley always knew that he was the one, noting that Hakeem said “I love you.” They bantered on in synchrony and it was an absolute beauty to watch.

Hakeem decided from 2017 that he desired to make Kimberley his wife, but something always stood in the way of making that dream a reality. In 2019, he put his foot down and said this was the year for it. The plan was pretty simple: propose where they first met. But scheduling a right time with the theatre proved to be mission impossible. A friend of his suggested Strawberry Hills and he was sold after seeing its captivating beauty.

He arranged for friends and family to join in on the surprise event, and with romantic assistance from a saxophonist, asked the love of his life to be his wife. Kimberley could tell immediately that the occasion was a significant one and happy tears began streaming the moment she walked in. It was within cries that she said “Yes.” “He got the perfect ring! The exact one I wanted without me telling him,” she added, as he showed it off with great pride.

Since then, they’ve been breezing through marriage counselling, gathering perspective and staying focused on the exciting path ahead.

For the trivia section, “How well do you know each other?” the two dove into the great unknown, hand in hand, hoping for a collective win. Both got the answers wrong in the first round, but remained sweet and understanding about the rationale behind the guessed answers. By the second round, Kimberley got it right when she said he preferred to stay home on a Friday night. And Hakeem quickly answered correctly that pizza is her ultimate comfort. But all hell broke loose when she shared that he loved her cats the most in this world, and to his dismay, he revealed that her answer would have been him, with a smiley face under the exclamation marks. Shock, paired with roars of laughter filled the room as he sneakily turned the smile to a frown. Upon recommendation, he later erased the exclamation signs altogether to replace it with ow, spelling out MEOW. That became the inside joke for the rest of the day. She attempted to redeem herself but nothing could beat that priceless moment.

They are both looking forward to building their lives together, making their union official and starting a family. “This is the love that you choose and I’m happy to be committing to him and making memories with him forever,” she said. They’re overjoyed to have found their significant other at a young age and are sure this path is the right one, putting God first and trusting that it will all work out. For them, it takes communication, (saying what is on your mind) respect and love to make a relationship work, with love at the head of it all.

Wedding bells are set to ring next year.