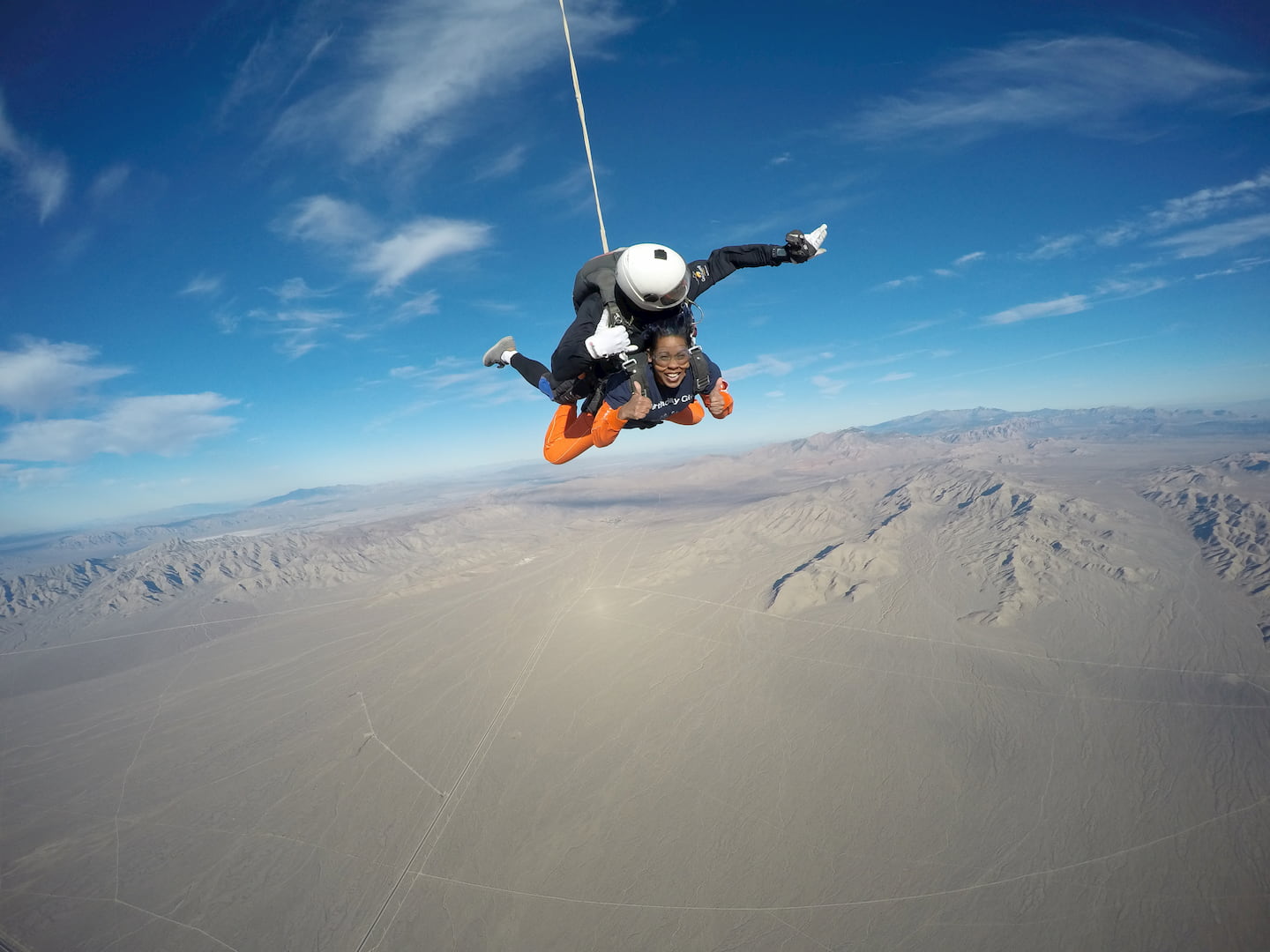 Skydiving has been on my list for about five years now. Initially,  I saw it in a movie and just thought how cool it would be to fly in the air like a bird. That’s the stuff that dreams are made of! And so, I added it to the wish list, with no real intention of ever doing it.

Two years ago, my friend Karen called me to say that she has a way of killing two birds with one stone (no pun intended). Since I had both Las Vegas and skydiving on my list, we could visit Las Vegas and do the skydiving there. She had found a company that offered the service. I told her yes enthusiastically, even though I knew that realistically it wasn’t going to happen due to finances.

Fast-forward to October 11, 2019, three of us out of the group of six ladies who had landed in Vegas the night before, got up at 5:00 a.m. to meet the shuttle bus to take us to the skydiving site. We were shivering as we had not anticipated the cold temperature. We travelled for about half an hour, picking up three other people on the way.

We were required at the office to complete and sign a form which pretty much indemnified the company in case anything happened to us. It even had a note telling us to ensure that our affairs are in order (in other words, make sure we have a will) and finally to name a next of kin. I won’t lie – that was a bit daunting, but since they would not allow us to do it unless we signed, I stopped reading and just ticked the appropriate boxes and signed.

Since it was my birthday, I was given a special ‘Birthday Girl’ shirt. I insisted on wearing it over the skydive jumpsuit (which we had to wear because it was so cold).

I was introduced to my jump team Starkey and Java. Starkey would be jumping with me and Java would be taking the pictures and video. We were given individual prep talks about how to hold our heads back and hold on to our harness (just in case we were tempted to grab the plane on the way out), and also how to stretch out our legs on landing.

Soon we were all strapped up and heading toward the small plane on the tarmac. We entered with our individual instructors, sitting directly in front of them so they could complete strapping us to them in preparation for the tandem jump.

As the plane took off and started climbing, Starkey pointed out the Nevada landmarks. After a while, I asked him how much further we were going. He said we were heading to 14,000 feet and we were about halfway there. All this time, Java was busy videotaping and Starkey was also taking photos.

As it turned out, the six people on our flight were all first-time jumpers, so no one knew what to expect. When the plane approached the appropriate altitude, Starkey checked and tightened my straps, then handed me a pair of goggles to put on. Before I knew it, the first pair of jumpers was out of the plane and in the air. That’s when I thought to myself, “This is really happening!”

Before long, four pairs of jumpers had left the plane and it was now our turn. We had slid down to the door and now we were just hanging outside the plane. The moment Starkey released the plane and we started free-falling, I felt an adrenaline rush. Surely, this was the end! But I soon settled as we were flying, just like I’d always dreamed, and Java was coming over with the video camera. I laughed delightedly and gesticulated because, of course, we could not hear each other. All too soon Starkey had pulled the parachute and we started drifting down towards the landing site. We had a perfect landing – what a great start to my Vegas birthday!

Story and photos by: Donna Anderson