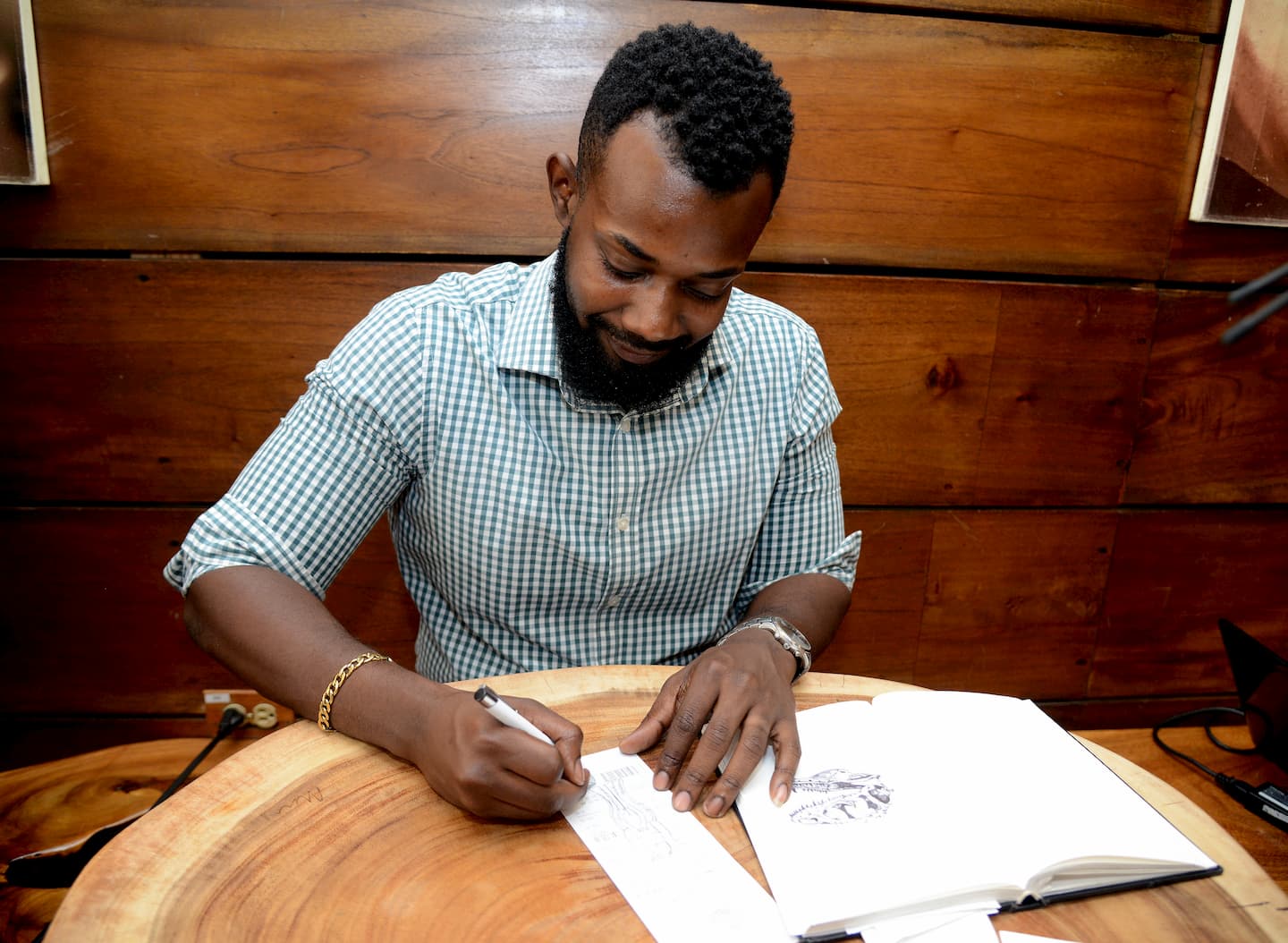 Entering the quaint bistro in Sovereign Centre on Tuesday morning, I was warmly greeted by a waft of freshly brewed coffee. While many buried their faces in laptops or savoured the indulgence of their scrumptious orders, I couldn’t help but notice one young man in particular fine-tuning a sketch. This was his daily routine. He would make his way to Cafe Blue’s Liguanea location, grab his rise and shine coffee and begin drawing on inspiration. His name is Romain Lewis.

Once my presence was brought to his attention, he stood, tall in stature, to offer a firm yet sincere handshake. He was a bit under the weather, but this didn’t dampen his radiant spirit.

Lewis wears many hats: an educational promotional representative at Kingston Bookshop, agent for Macmillan Caribbean as well as second vice president of the Body Building Association of Jamaica. Now he has added sketching to his portfolio, standing out as the ‘receipt artist’.

“When I do have some free time, I like to sketch, be it in a book or in a receipt,” he shared during his interview with Flair. So, how did this skill come into the picture? Art, he says. was a hobby for him back in high school and was never a practice that he took seriously. When he started his own clothing line back in 2015, he put his creative skills to good use, doing the blueprint for the brand. This included sketching the designs and creating the measurements so he could have those produced. But he didn’t follow up with anything art related until he casually incorporated the genre into his morning regime.

“Where drawing on the receipts came in, I was having my usual morning coffee and I randomly decided to sketch: nothing serious, no intention, no special reason, on the body of the receipt.” Lewis admitted to hating that first piece, but made it his mission to improve it because he enjoyed this pastime activity. “For me, it’s therapeutic, it clears my mind. My schedule can get very hectic and so just sitting and coming up with something makes me more ready and willing to take on the day,” he added. He admires conceptual pieces and draws on that for inspiration. The majority is symbolic of what he is feeling, thinking or plays on societal issues – something that’s not too on the nose. Occasionally, his pieces are straightforward, but for the most part, he likes when spectators think, reaching their own epiphany after looking at it for a bit by saying, ‘Ahh! I see where he was going with that!’ and share what it means to them personality.

All his sketches were originally bound to about 30 minutes: if he could not complete it by the time he finished his coffee, then it made no sense. After a while, he decided to take his time and exercise patience during the creative process.

His first customer was a toss-up among friends. In the end, Jason was the winner solely based on timing, but everyone was happy. “I try not to repeat sketches, I like when each piece is unique to the owner. So there’s no photocopying, you get the original receipt or page: no duplication. There might be one piece that inspires another, it would be a continuation of what was already there.

The most popular drawings are ones that connect to strong emotions of love, intimacy, growth or overcoming adversity. The black and koi fish representing yin and yang, a man with the world on his shoulders. People, he revealed, gravitate to what they can relate to. “Preserving art can be tricky, especially if it’s done on a receipt. The ink can fade. I have all the drawing framed. I found that this holds and preserves the life of the ink. I can’t say for how long, I have only been doing this for a couple of months, but so far, it has been working the ones I’ve had for five or six months. I’ll continue to monitor that and then see what happens.” There hasn’t been any obstacles, some persons are just drawn to the pricing of the receipt and would prefer if the purchase on display is reflective of a monetary value about $1,000.00. He doesn’t run out of canvas since he is always buying coffee, but others donate supplies by giving their receipts.

Cafe Blue, he says, has been receptive and supportive and he is very grateful and appreciative of their team for providing that freeing space and allowing him to use their receipt as his canvas.

Introversion and public service are two extremes that Lewis contends with daily. The two he declares will burn him out so he needed to find something that balance out life, ambition and health. He uses art to not only bridge the gap between the two contenders, but utilises it as a great tool in assisting and maintaining good mental health. “It doesn’t make sense that you become the most successful person in the world and your mental health can’t withstand the pressure. If you are going to commit to your goals, and with assisting others, you must have a solid foundation internally.” He continued, “I used to teach for five years and one of the struggles for a lot of students wasn’t the work I was giving them, although it was hard, it was dealing with their internal demons and the stresses of life. I found that once they were able to link an activity with feeling better, they would excel. So what I want persons to take away from my art is balance, putting effort into making your mind your happy place.”

He encourages aspiring artists to practice, don’t rely too much on validation or opinions, express yourself, be loud, speak as often as possible and find their voice.