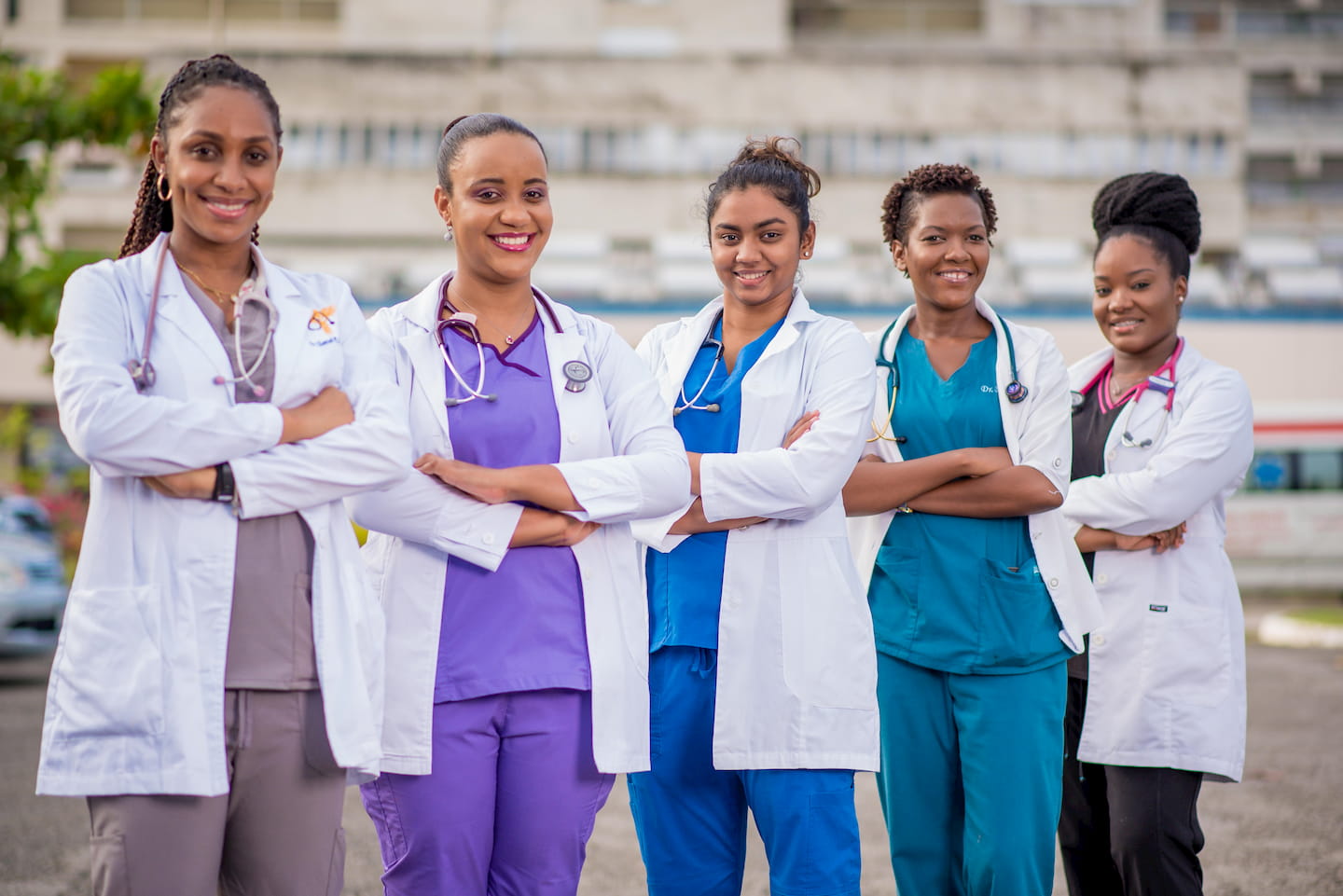 Five doctors rise above it all

Shasha-Marie Williams could have been a pregnant teen, because that was the norm in Flankers, St James, where she grew up; while Shellian Blagrove was expected to scorn her problem-plagued community of Mt Salem.

Their friends – Thejasree Pulikanti wanted nothing else but to follow in her parents’ footsteps; Marla Kay Richards, a country girl, received far less lunch money than her classmates; and Chantae Bardowell felt like giving up many times.

Four of the five women attended Montego Bay High School, while the other walked the hills to Mt Alvernia High School, nicknamed ‘Alvernia’. All five were determined to become medical doctors, and nothing would stop them.

Now doctors at the Cornwall Regional Hospital in Montego Bay, the young women have become inseparable on the front line as they join the fight against COVID-19, each having had close calls with the virus since it entered the Jamaican airspace in March.

But in spite of the overwhelming challenge that the global pandemic has caused since its emergence in China late last year, the young medical professionals are adamant that it won’t dominate their lives.

Drs Williams, Pulikanti, Richards and Bardowell have known each other for about 16 years, while eight years ago they met Blagrove while studying at The University of the West Indies, Mona.

They have been practising for an average of four years each, with Bardowell recently completing her studies in Cuba, and her first year as a medical intern.

“We are all general practitioners making steps to specialise in the near future,” Williams told The Sunday Gleaner.

The most compelling story of the five is Dr Blagrove’s, who grew up in Piggott Street in Mt Salem, St James – an area written off by many. In fact, she has been questioned countless times by soldiers deployed in the zones of special operations (ZOSO) community, asking why she lived there and if she wasn’t afraid.

“I would proudly say because this was where I was raised. My parents and the church made me know that it doesn’t matter where you are from, but where you are going. I still live there,” she shared.

“My community members are proud of me. My hope is to inspire little boys and girls to dream, even when it seems impossible.”

For Dr Blagrove, medical school was the hardest thing she has ever done, and she admitted she couldn’t have made it without the support of her four friends.

“We played together, laughed together, studied together, and pushed each other. And today I am so proud that we work together,” the young doctor beamed.

Dr Williams was inspired to join the medical profession from as early as 11 years old, when she noticed white spots on her skin.

“As time went by, they got progressively worse and appeared in places that I could no longer hide. The stares, finger-pointing and all the questions were nothing compared to the fact that my condition had no cure,” she said.

She was diagnosed with vitiligo, which sparked her interest in dermatology.

The 28-year-old grew up in Flankers, where the standard at the time was for young females to get pregnant and males to be involved in gangs.

“It was at that point that I knew, and where I saw it was also my responsibility to lead and motivate persons in whatever way I can to be better versions of themselves and members of society,” Dr Williams revealed.

Dr Pulikanti has a different story, growing up in a home where both parents were established medical practitioners.

“As long as I can remember, I have wanted to become a doctor to help others. I am from a family with three generations of medical professionals, I simply never saw myself as anything else. I wanted to follow in the footsteps of those who raised me and I have not once regretted my decision,” said the 26-year-old.

Pulikanti admitted that there were several times she felt like giving up, because medicine is difficult, but those moments were when support from her family and friends became vital to make it through.

“Undoubtedly, my greatest supporters have been my family, who helped me to become who I am today,” she stated.

She had her struggles growing up in a family not the least affluent. Actually, most persons in her family did not even have a job.

“As a child in infant school, I questioned this and asked why? I was uncomfortable with it, knowing that we could not afford some things and I got way less money for lunch than other children in the class. At that point, I knew that I could not fall in the cycle and when I grew up I had to have a job, and not only a job, but a profession. Education would be my key to success,” she said.

The 27-year-old shared that her family was proud of her accomplishments, not only as a doctor, but throughout her entire school years from infant to university.

One of her most difficult moments was the beginning of fourth-year medical school and one week before one of her clerkship exams. Her mom died from breast cancer.

At first, her coping skills were good but as the months progressed, Dr Richards got the strong urge to quit the programme. But the guiding spirit of her mother kept her going.

“One night, I had a vision of my mom giving me a strong warning not to do so, and that I must run the race with patience. It was that warning and her repeating it three times that motivated me to continue, and here I am today,” she proudly stated.

THE DRIVE TO GO ON

Dr Bardowell knew she wanted to be a doctor since primary school, and was even more convinced after she watched the movie John Q. She went on to study medicine in Cuba, at the Universidad de Ciencias Medicas de La Habana.

The 28-year-old, who spent her early years in Trelawny and Westmoreland, spoke about wanting to give up many times during medical school.

“I had several nights of tears, feeling hopeless and lost. Especially while being away from family and living on my own in a foreign country, with different culture, different people, different language. But despite those hard times, I had a drive, I had a goal, I had to achieve for myself, then for my family. I never wanted to let myself down. And that drive kept me going,” Dr Bardowell declared.

This story was originally published in The Sunday Gleaner on September 13, 2020.