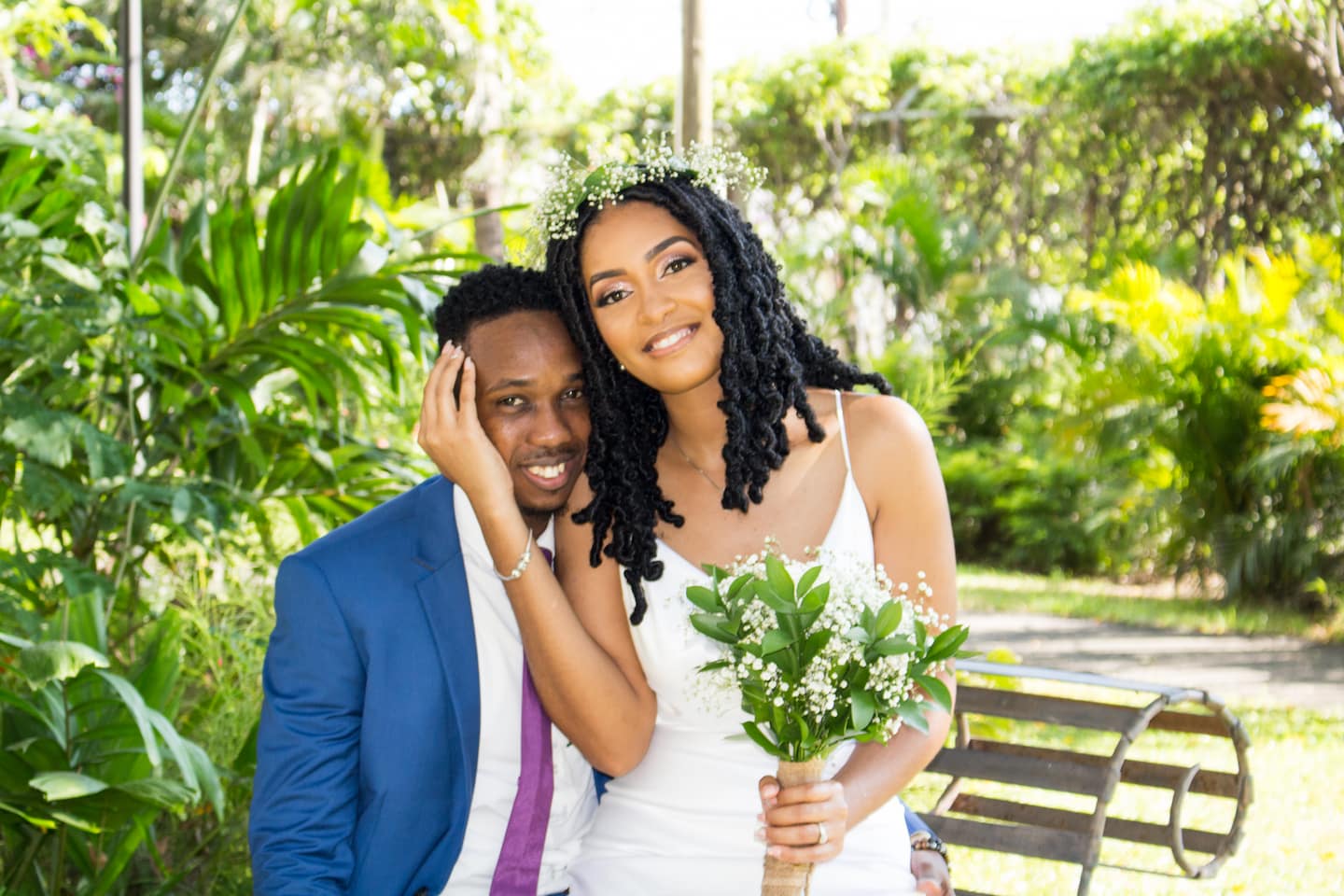 From ‘Hello’ to Mr and Mrs Allen

“You had me at ‘Hello’.” Don’t you just love when iconic television lines play out in reality? Albeit delivered a little differently than in Jerry Maguire, this simple greeting led to the happily ever after of Jhané Palmer and Keneil Allen.

The lovebirds met back in 2016. Jhané first saw Keneil in his element: playing the drums at church. Her initial thought was that he was really handsome, so she inquired further and received his name. From there she looked him up on social media platform Facebook, and made her move by sending him a message.

Keneil, who had arrived home from work and was settling into his routine, checked his messages, only to see a “Hello” from Jhané. “I wasn’t familiar with the name, so I clicked on her profile to see if it was someone I knew by face. When I checked, her face didn’t look familiar at all,” he told Island Wedding.

But he did admit to finding the girl of mystery super cute, so Keneil decided to reply with “Hey”. His response led to smooth conversations spanning more than three months via Facebook inbox. They soon progressed to WhatsApp messages, before graduating to a face-to-face meetup at the annual gospel concert, Fun in the Sun. “By talking to him, I realised that he was pretty chill, someone who I could have a good conversation with. He also seemed really caring, and it was obvious that he loved God,” Jhané said.

The pair kept things casual for a few years until they reconnected in 2020, through a ‘boyfriend application’. “I commented on a post she made about [a] boyfriend and application, saying, ‘I’m going to send you my application.’ She laughed and said, ‘Sure’,” Keneil revealed. They messaged for a bit, took an unplanned break for a month and returned with the strongest spark they had ever seen.

Kind-hearted, down-to-earth, talented and encouraging, Keneil said that Jhané is easily one the most beautiful persons he has ever seen, “She cares so much for people and goes out of her way to ensure those around her are happy and comfortable. She gets along with everybody and knows how to have a good time, wherever she is.”

Not only is she an amazing pastry chef, Keneil highlighted that she is an avid painter, as well as a maker of skin products and candles. “It’s like everything she put her hands to turns out amazing. She is reassuring, pushes me daily to be the best version of myself, to think beyond my comfort zone, believes in me, tells me of the great plan God has in store for me, and makes me feel like a king,” he said.

Talented, caring, funny, God-fearing and handsome, Jhané admires Keneil for his great abilities in both sports (basketball) and music. Not limited to the two worlds, she is intrigued by the fact that he also dabbles in photography and videography, as well as streaming and graphic design. “He can literally do anything. He’s always looking out for me. He makes me laugh; he’s a kid at heart. We have devotions and pray with each other. His strong faith really encourages me when I’m down or need to be reminded.” She added, “Keneil just ‘stay’ good! He’s so handsome and attractive to me. Sometimes I just stare at him in awe.”

The couple officially began dating in June of 2020. Jhané tells more about their first date, “We went to Gloria’s; it was pretty chill and cool. We ate, talked, and it was honestly a breath of fresh air. There was so much laughter. After we left Gloria’s, we went to the Palisadoes strip, where we relaxed and just enjoyed each other’s company.” By mid- September, they saw this epic love going all the way to ‘I do’ and beyond. So Keneil, being a man of honour, asked his beloved to marry him.

Having been physically apart due to COVID-19 for a month, Keneil had arranged a romantic lunch for his soon-to-be fiancée. He told the restaurant of his plans for a wedding proposal, requesting assistance in making the occasion extra special. He shared, “Jhané didn’t suspect a thing. While taking pictures, the restaurant started playing Bruno Mars’ Marry You loudly through their speakers. The manager came up to me, said she had something to give to me and gave me a paper with the words ‘Will you marry me?’ written on it, to present to Jhané.”

He continued, “A waitress then carried the ring on a slice of a cake. I took the ring out, went on one knee and asked Jhané to marry me. She said ‘Yes’,” he recounted. His friend followed through with his role as a photographer, capturing the amazing moments. And onlookers cheered and congratulated the newly engaged couple.
The majority of the wedding planning was done by the soon-to-be Allens. Friends and family members pitched in where they could. While the process was filled with both anxiety and excitement, it was all worth it in the end.

On December 12, before God and specially invited guests, Keneil and Jhané were pronounced husband and wife. Held at The Jamaica Pegasus hotel, the majestic morning garden wedding set the tone for a life of love and happiness. The couple described their wedding day as amazing. The best part for the groom was standing at the aisle with Jhané, looking into her eyes, all the while thinking, “This is actually happening.” While for the bride, walking up to her groom was the highlight of the enchanted event. “Just standing up with Keneil, knowing that we were actually starting our lives together, was so incredible. And our pastor made the ceremony really fun.”