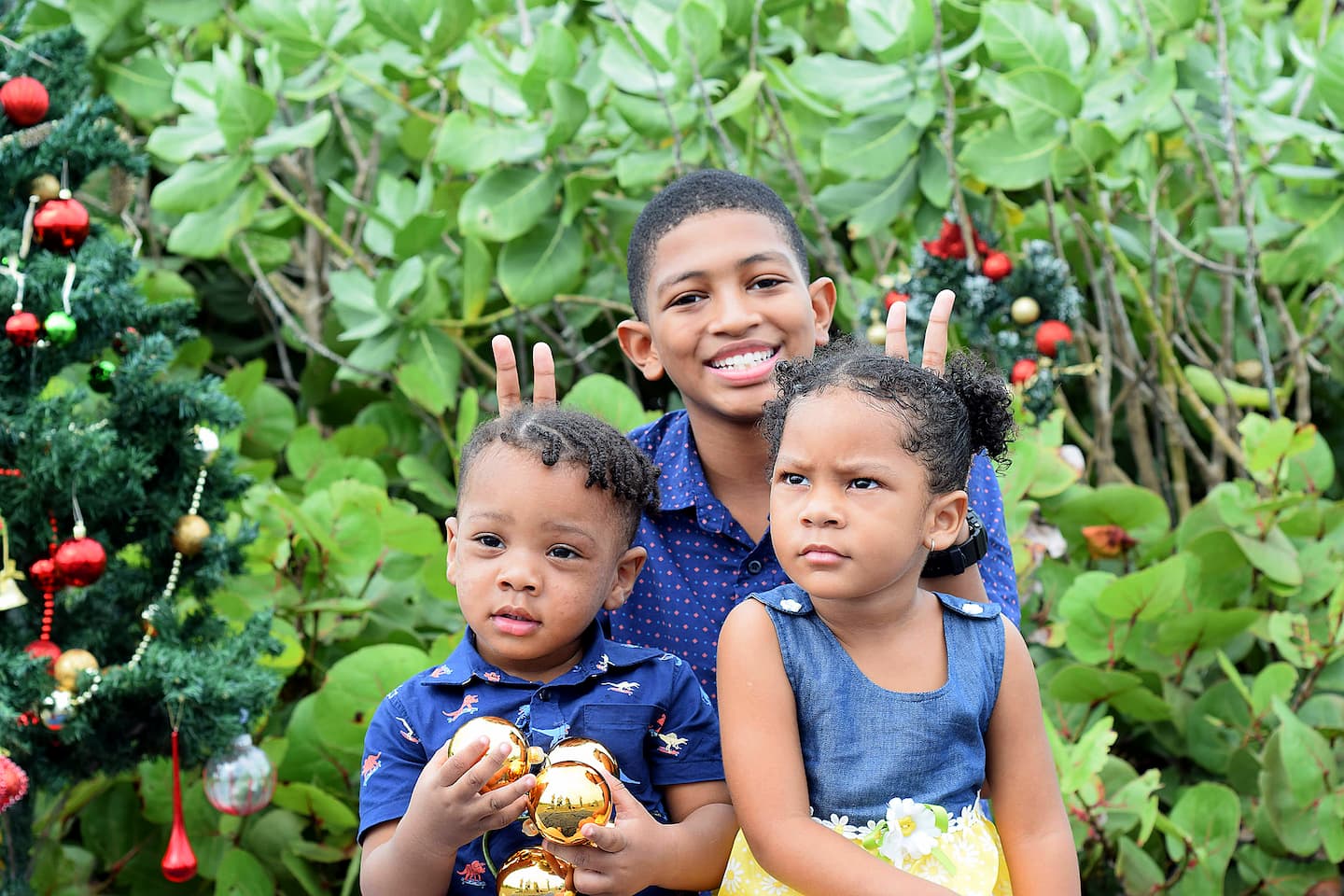 The greatest blessings are the ones brought in serendipity. Hillary Evelyn-Birch had dispelled the idea of having a baby from her mind until she discovered at 20 that she was pregnant. Talk about what not to expect when you’re actually expecting. Then, just when she thought it couldn’t get any better than her miracle son, the mother of one did the unthinkable in carrying two more bundles of joy into this world.

During the interview, the mother of three could be heard going over a checklist for the next day and telling her children goodnight. She effortlessly combines the love language of physical touch through hugs and words of affirmation as she encourages them to “sleep tight”. From there, she sneaks in quality light banter with her husband, before getting cosy to share her journey towards motherhood.

Her main reason for the shock of her firstborn stems from her bout with the monthlies, or lack thereof. Haunted by irregular monthly cycles, Evelyn-Birch suffered through the trauma of the unknown as a teen. When menstruation did present itself, there were no signs, so she would pray that it would surprise her at home, but walked around with her kit on the road, just in case. After visits to gynaecologists, it was concluded that this was her genetic make-up and they could only treat it. “It was recommended that I be placed on family planning, but my mother said there’s no way she is putting her 14-year-old on that,” she told Flair. The doctor at the time further advised that the teen could continue on that trajectory. However, when she would be interested in having a baby in the future, then she could return and they would best assist her.

With the second opinion speaking on the hormonal imbalance, she decided to take birth control at the age of 16, to essentially be in more control of her body. “Back then, no one told me that taking birth control could make me so moody, cause acne, and all the other hosts of side effects that you couldn’t see coming,” she shared. So she put a cease-and-desist order on that original proposal and returned to her easygoing nature, considering that she had pain-free flows when her period did make its appearance.

It is for these reasons, paired with the discussions with doctors, that she never imagined a baby in her future. But lo and behold, she began experiencing body changes. “I began sporting bigger boobs. I thought nothing of it, except, welcome! This is pretty late in the game but I like this!” She also started to like milk, despite being lactose-intolerant, and had no reactions. This was November. By January, a friend in college began telling her about her wonderful glow, asking her the impossible: are you pregnant? She dismissed the conversation, then two more persons mentioned the glow at different intervals.

Curiosity got the better of her and she decided to do a pregnancy test. The results nearly made her pee herself. This could not be, she thought, so Evelyn-Birch bought another test. Before she knew it, she and her village were scurrying for pregnancy tests, just to confirm that their eyes weren’t deceiving them. They panicked together when they were all positive.

“First time around, there was definitely panic, because I wasn’t physically, mentally, emotionally, or financially ready for a child. Panic because you live under your parents’ roof, not that you’re a child, but you’re not financially independent, I was in college,” she said. Going from panic to planning mode wasn’t a pretty road. There were concerns, and when she went to the doctor, she discovered, “ … I had been four months pregnant”.

The mother of one struggled through attending school, studying information technology full-time, working part-time in the evening, while raising her son at 21. “That walk into motherhood was hard. But I juggled it with the village. My best friends used to help me with Austin while I studied, and my parents and other families chipped in. There were moments where you question if you’re doing the right thing, especially when he would constantly cry and I did everything I could, with no change,” she said. Ironically, she spoke about ‘mom guilt’, because while she is getting the help, the time spent away from her son meant there wasn’t enough bonding time, because she would reach home when he was asleep. There were weekends: would that suffice? “Well, it’s 14 years later and I’m the love of his life,” she reflected.

Motherhood taught her a great deal about keeping it together for the sake of her child. When she and his father were at odds, the pair maintained a stable environment at home until they parted ways, but have remained amicable to this day. She did admit that the experience, while strengthening her as a mother, broke her down as a woman. So, she turned to Christ and counselling for healing.

When the time was right, she fell in love once again, and naturally, the discussion came up about children. Each had boys from previous relationships and her partner was okay with things remaining that way. God, however, had other plans. While they were going to couples counselling, she discovered miracle number two. As a surprise for her guests, her bridal shower also became the Birch wedding. Her daughter Amira was born a year and eight months later, and then Micah came into the world. Raising two toddlers under two wasn’t easy, but by the grace of God, she has made it through with the help of her supportive husband – and has three of the most precious gifts in life.

“We try to ensure that each parent gets individual time with each child. Amira and I go shopping with my mom and go to different stores on a girls’ day out. Micah and I will spend time at home alone together so he can get undivided attention or we explore different foods; he is a foodie and engages in outdoor experiences. Austin and I grew up going to farms and other trips, but these days, we share interests in music and have discussions about trends, and both appropriate and inappropriate matters in current affairs.”

Parenting is not easy, so her advice to new mothers is to find a trustworthy village for support and sanity. “My mom used to say [to ensure] that you are okay first. I never got it because, for me, it was a child first, parent second. But I can’t function efficiently if I’m not at my best, and the household tends to crumble because one key element is missing. So take care of yourself and take care of your children; build a safe haven for them, because the world is a scary place.”