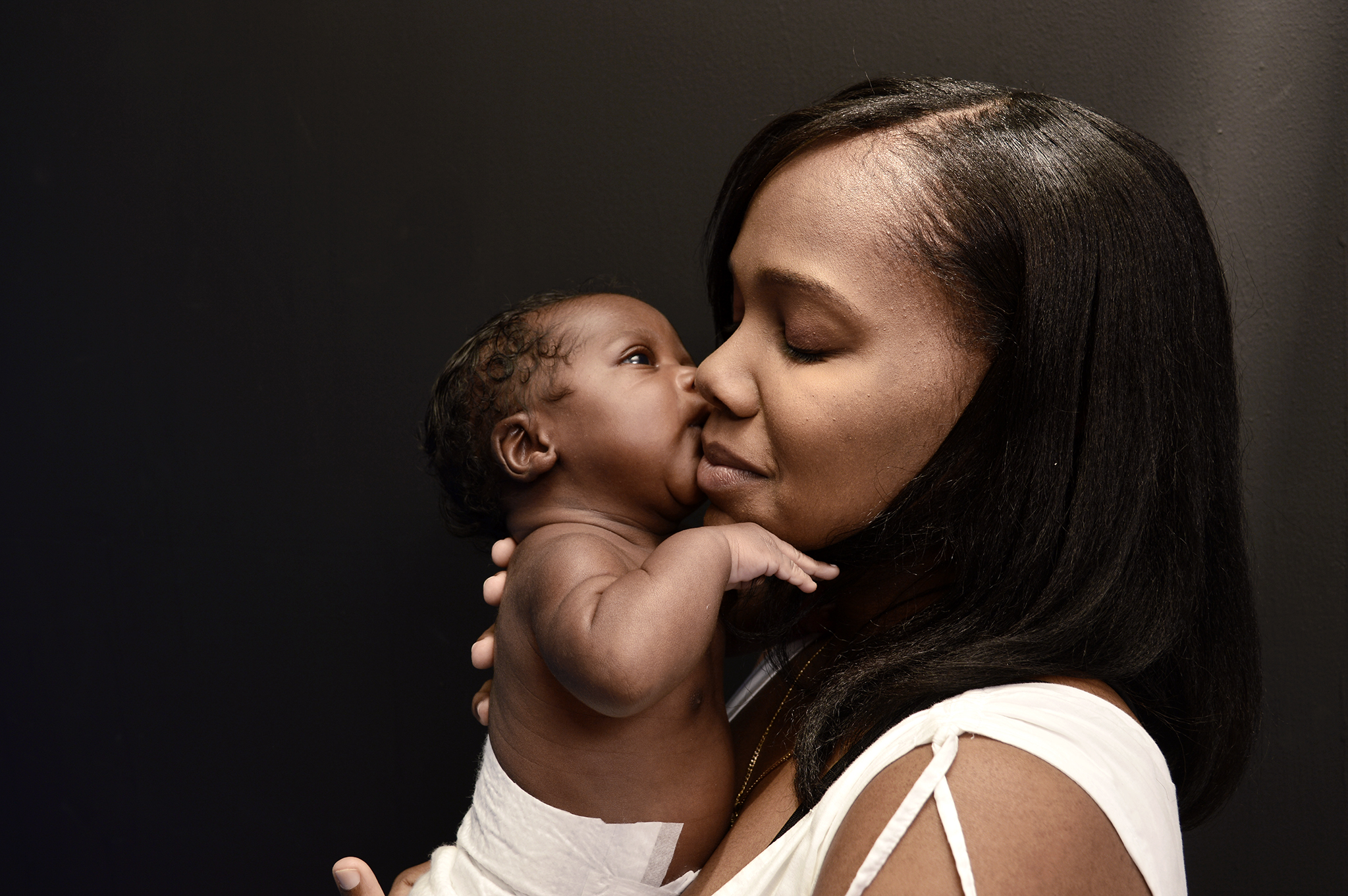 I’m pregnant? Mothers reflect on the stories behind the startling discoveries

The first carnival Ring Road at The University of the West Indies, Mona campus, took a sad turn for a 21-year-old reveller who grew ill. Determined to let fêting prevail, she sought refuge in the passenger’s seat of a parade truck. Only to be met by the driver’s concerns. Curiosity got the better of him as he asked “Are you okay? Sure you’re not pregnant?” This is just one of the many candid stories behind the early (or late) detection of motherhood.

A resounding ‘No’ followed in response, then a pause for more thought. Returning home, she grabbed a pregnancy test purchased on the way and discovered that she was in fact with child. ‘I’m pregnant?’ was her immediate reaction, but she soon welcomed the new role of being a mother with open arms. That 21-year-old was my mother and the baby growing in her tummy: yours truly. Let’s see just how other moms reacted after finding out that they were going to become mothers.

Jeanna Brown, 31, human resources administrator
All the signs were there: my monthly cycle was late, I was sick for days, feeling weak and nauseous, so I knew something was off. So I decided to buy a pregnancy test at the pharmacy. At first I had mixed emotions, not knowing what to expect. The day I found out it was a boy though, I became more emotionally connected. I even became obsessed with the colour blue. I still am. But nothing beats the first time I saw and held Jhaevon.

Deja Gordon, 26, dog groomer and entrepreneur
When I found out I was going to be a mom, I was nervous. My partner and I weren’t living together, we weren’t married yet. We weren’t as financially stable as we would want to be. How am I going to manage this? But at the same time, there was joyfulness in the midst of the news and I was excited; it was a whole new chapter. It helped that my family members were excited as well. Although I was disappointed that I wasn’t having twins, I enjoyed my pregnancy to a point. And when my bundle of joy arrived, that’s when it hit me that I’m a mother now. I could not have been any happier for my daughter. She is so sweet and adorable, she gives me baby fever every day.

Jasmine Hibbert, 40, banker and entrepreneur
When I first found out that I was going to be a mom, I was excited and anxious at the same time. This was something I wanted after having a stillborn: to love and care for another human being. Today, my Prince Shavaur is the richest blessing to me and the family.

Pia Jordine, 31, public relations specialist
Honestly, I found out that I was pregnant through the father of my child when I was having morning sickness. He had kids before, so he knew morning sickness. When I started questioning it, I realised my breasts had started feeling different. These days, outgoing and travelling Pia has turned into a boy mom: my biggest thing is not losing who I am because I’m now a mom. My son is my ‘handbag’ for dinners and plane rides.

Donnette Mason, 28, photographer
It was a Sunday evening after a photo shoot that I found out that I was going to be a mom. At first, I didn’t really react, but at the first doctor’s visit I got emotional, I cried tears of joy because I was like, ‘Yes! it’s really happening!” Throughout the pregnancy, I was anxious to find out if my little ‘bubz’ was okay. And I made sure nothing happened to change that. When Tai arrived, it was the most amazing feeling I’ve ever experienced in my entire life. That soft squeeze she gave me with her cute little fingers melted me inside and made me realise that I am a mother to a beautiful baby girl, my lifeline and my heart, my Tai.

Kayan Merritt, 35, make-up artist
In April 2011, I received the best news of my life – ,that I was going to become a mom! I was an active netballer, representing my work and had just started training for the upcoming Business House Netball League in June of that same year. I was at training and accidentally wrung my ankle, and had to visit the doctor. When I completed my check-up, I also asked for a pregnancy test to be done because I was 10 days late on my period. To be honest, I was not expecting a positive result, but I was curious and wanted to be sure. When the result was ready I heard the doctor say, “Congratulations are in order!” I shouted, “Ah, what does that mean, Doc?” He smiled and said, “You are gonna be a mom soon!” I was totally shocked! Today, my multitalented little diva is my strength when I feel weak. My little companion and TikTok partner. My lil helper. With her in my life, there is never a dull moment.

Rochelle Mitchell, 40, radio broadcaster
I was absolutely terrified when I found out I was going to be a mother, I doubted whether or not I was ready to be a mom: the enormity of becoming a parent and what that looked like when done successfully scared me. I took six pregnancy tests because the line was a little pale, so I thought, okay, maybe it’s a false positive. I cried for weeks, because pregnancy has always been my greatest fear. But then a sense of calm and understanding prevailed, and I knew that I no longer had the luxury of not always being at my best. I came to the realisation that I was now responsible for a whole other person who would depend on me for her needs. And this little person, my person, deserved the best, and the best version of me. Becoming a mom has been the greatest achievement of my life. My daughter is the best; and I would do it over, 10,000 times, for Xuri.

Stephanie Wallace, 36, singer and entrepreneur
Sometimes it still blows me away that I’m a mom of three. The journey has been so profound. I was first introduced to motherhood through an unplanned pregnancy and I was terrified. I had just stepped fully into adulthood and got right into the big leagues, it seemed.
I was unprepared and filled with trepidation at the journey ahead. I often say that Sharlize set the direction and pace of my life, and she may have very well saved me from a different path. Being her mom introduced me to boundless love, inner strength, and a sense of purpose.
When I found out I was pregnant with my second daughter, Madison, I was nervously excited. Even though she was also unplanned, I was more established in life, with more security in myself and my personal life. My village had also grown, and the atmosphere around me was more supportive. I was more confident as a woman and as a nurturer and bravely embraced the path ahead. Needless to say, my world and my heart grew some more. Parenting girls is a special kind of mechanism. I saw myself grow in real time; in as much as I taught and guided them, they did the same for me. I was/am an interchangeable teacher and student.
People often asked if after having my two girls I wanted more children, and my answer was always yes. On condition, I was truly happy with my life, found my person (as I was now single), and this time planned for it. I held myself to that promise, and deciding to become a mom one last time was a different experience; from actively trying, to frequent home pregnancy tests, and eagerly awaiting the confirmation – it felt empowering to be able to choose to do it again. I was over the moon when we conceived. As I started to establish my circle of trust with the news, hands down everyone called for a boy. I convinced myself it didn’t matter, I just wanted a healthy baby. But when the doctor said, “You’re having a boy,” words can’t explain the joy.
Just like consciously deciding to become a mom again, I also consciously decided it was my last rodeo. So knowing I was going to be a boy mom was just perfect, my trio was complete. My girls and I have a special bond, made in pure unconditional love, but was additionally forged through many trials and errors. I don’t know how different growing a boy will be, but I have an arsenal of lessons and experiences that I am equipped with. I have so much to offer Liam, and I’m glad he gets to experience a mommy who’s stronger, braver, and a lot less broken.
Motherhood has grown me and taught me so much more than anything else in this life so far. The relationship I have with my children, and the love we share collectively and individually, is worth everything. In all of what I was called to be in this life, I believe motherhood is one of the most important. I am happy. It is far from easy, but when I look into their eyes, it’s all worth it. We belong together.

Patrice White, 42, celebrity personal trainer
I was shocked when I found out I was pregnant. My daughter wasn’t a planned pregnancy, so for the first couple of days, I just went through the emotions of what is about to come. Everyone who has been following me knows that Maks is my one and only. I call her my ‘One Egg’. I found that even on my most stressful days, our conversations, our banter, have been so hilarious that I just couldn’t keep them to myself. One of the reasons I share the bits and pieces of our conversations is a reminder to parents, “Flex well enough with your children, they can speak with you.” So many children don’t have a connection with their parents because the parents have a wall, create a barrier and aren’t even relatable. I want my daughter to know I am here in many roles. Mother first, confidante and friend. I am the one to be firm as ever, but flex the same way. We have each other, through thick and thin. Our conversations are just a glimpse at what we share. She’s my biggest blessing, I thank God every day.

FLOW mothers balancing the demands of the office and motherhood