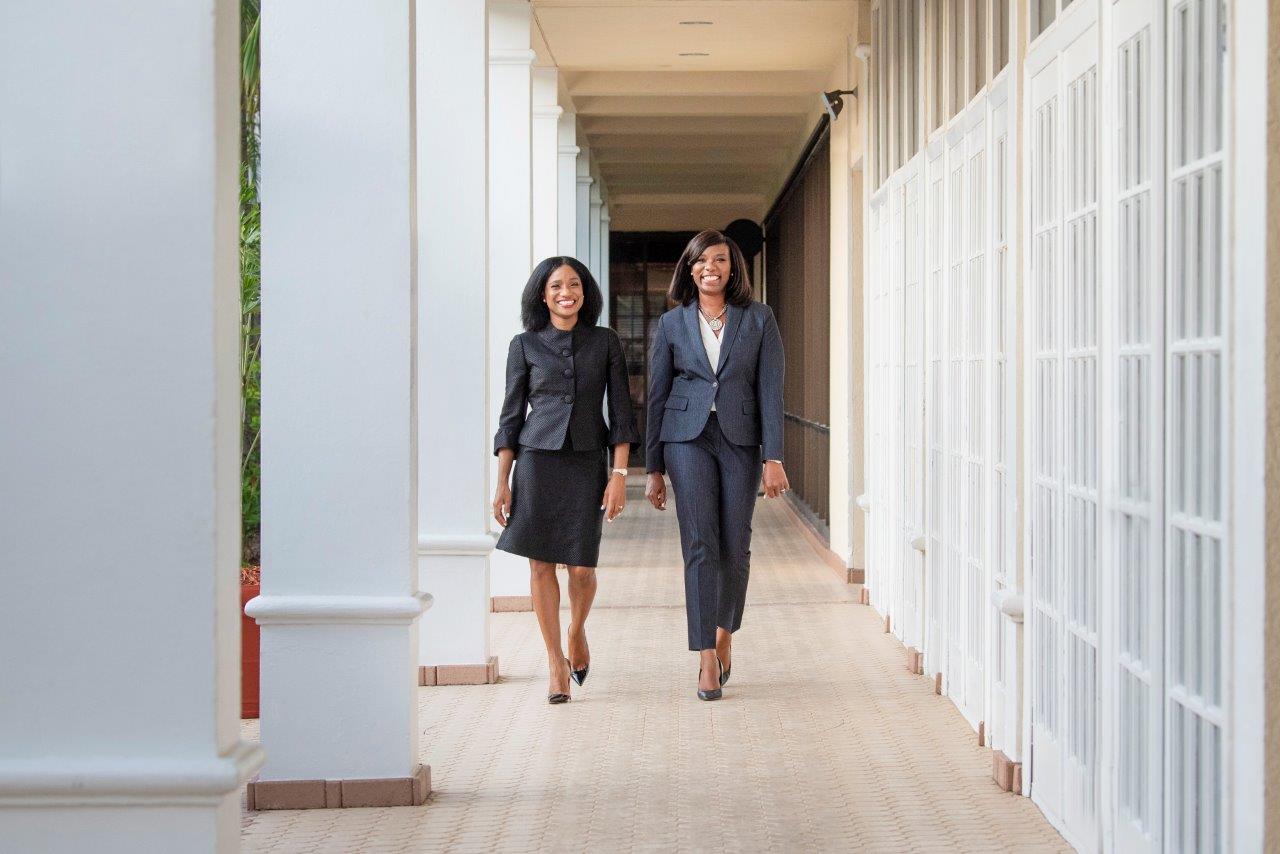 Two Jamaican attorneys residing in the Cayman Islands have embarked on a fascinating journey as they combine their feminine forces to break new ground in a traditionally male-dominated field, and to top it off, they got their business up and running in the midst of a pandemic.

Francine Bryce and Jo-Anne Stephens have flung open the doors of Bransens, a new offshore boutique law firm, which has the distinction of being the only one in Cayman headed by women. This is no easy feat, considering that Cayman is one of the leading global financial centres in the world, connecting investors with investment capital and financing worldwide.

Justifiably proud of themselves, the dynamic duo – both of whom are mothers – have hit the ground running, while acknowledging the support from the business community, which has fully embraced them.

“Two females coming together to start a law firm is rare, and Francine and I are absolutely excited,” Stephens, who has lived in Cayman for eight years, told Flair in a voice that spoke volumes. “The reception has been very encouraging. We have our own network of clientèle, and we have also benefited from being Jamaican, as the Jamaican businesses have supported us,” she added.

Bryce offered similar sentiments. “Can’t make light of the fact that we have started as two Jamaican females, and it gives me great pleasure to be making a mark, and to hopefully inspire others, especially young attorneys, who can see examples of somebody who looks like them making strides. It’s not a glass ceiling; opportunities are there for others to excel,” she said passionately.

As colleagues who, interestingly, met while living in Cayman rather than their homeland, their shared vision soon saw them forming a friendship which has blossomed into the creation of Bransens, “a partnership founded on achieving excellence through the provision of first-class corporate, wealth structuring, real estate, immigration and regulatory advice to its global clientèle”.

Bryce had already had one bite of the cherry, so to speak, having been a partner at a law firm that was acquired last year. “With COVID came change and introspection and the need to have direction and also control over my goals. Jo-Anne and I had worked together at another law firm, and it was just a case that our opportunities merged, and a better story could not have been written. We are not just colleagues; we are friends,” shared the legal luminary, who visited Cayman first in 1999 and fell in love with the island. The married mother of two has now been living there for a decade.

Although the proximity of the beach is definitely a pull factor – just 15 minutes away and one can leave home at 4 p.m. and go to the beach – both admit, with laughs, that for them life is not a ‘beach’.

“We work hard and have long hours. We have to balance family time and work, and that may mean having conferences after the kids have been put to bed. It is rewarding for us, and there are some advantages to living in Cayman. In Jamaica, for example, I used to drive an hour to work, now I drive 15 minutes, and Cayman has a lot of amenities for children,” Stephens, the mother of an 18-month old “nicest, sweetest son in the world”, said.

Officially launched on March 24, Bransens is off to what the principals describe as “an exciting first month”, which has seen the company having a full staff complement, a swanky commercial office space and, of course, their official www.bransens.com website.

“We had the grand opening and everything, but a major setback was not being able to travel for purposes of marketing, but we are making use of technology. So, we will have a Zoom call in the UK this minute, followed by another in Jamaica. We knew exactly what challenges we were up against, but we stepped out in faith in the middle of a pandemic,” said Bryce, a Rotarian and a certified anti-money laundering specialist, whose 16 years in the legal field has fully equipped her for this venture.

She has acted in various aspects of corporate and commercial transactions, including cross-border corporate and finance transactions, mergers and acquisitions, corporate restructuring, investment funds, securities, and banking. She regularly advises on local licensing and the full spectrum of regulatory requirements associated with doing business in the Cayman Islands. Bryce also specialises in maritime and aviation matters, including ship and aircraft registration, financing and leasing arrangements. She has been a presenter on regulatory matters from a Cayman perspective at a number of international conferences.

Stephens, who has consistently received the distinctions of being a “Recommended Lawyer” and “Rising Star” by the Legal 500, brings her more than 15 years of legal experience to Bransens. Her expertise lies in establishing corporate and trust structures for high net worth individuals to meet their wealth or estate planning needs and regularly advises trustees, settlors, beneficiaries and protectors on all aspects of trusts law. She also specialises in advising financial institutions, investment managers, fund administrators and companies on the establishment and operation of mutual funds, particularly unit trusts, private funds, employee benefits schemes, pension plans, share trusts and other commercial trusts.

A speaker at international conferences, including the Step Global Congress and Private Client Series, she is a member of the Society of Trust & Estate Practitioners (STEP) and Cayman Islands Law Practitioners Association. In 2016, she was awarded the STEP Student Award worldwide, and the following year she received the STEP Student Award for the Caribbean and Latin American region. She has also been the recipient of four STEP Excellence Awards.

Bryce and Stephens started their legal careers in Jamaica at Livingston, Alexander & Levy, and Dunn Cox, respectively and enjoy a combined network spanning the wider Caribbean, United Kingdom and Europe.