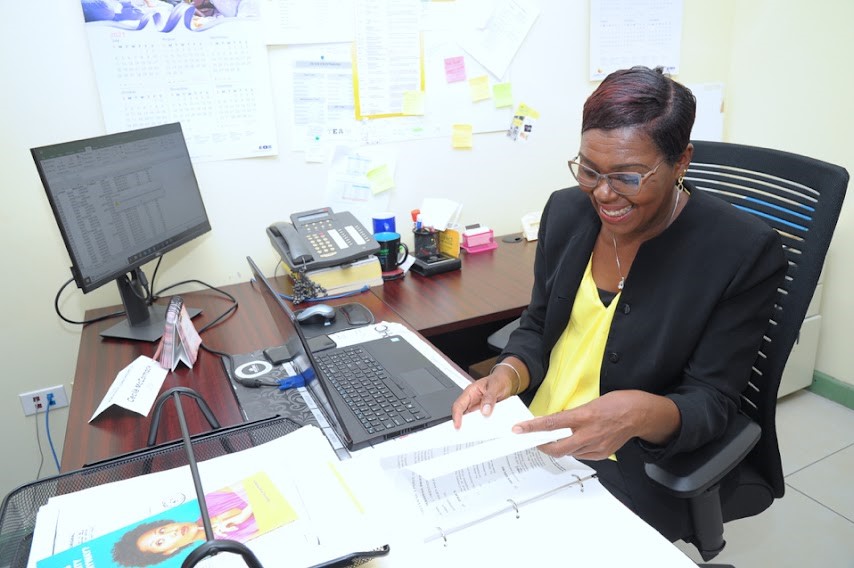 Some may remember Cecile McCormack as a talented table tennis player who represented Jamaica in her youth. Now the revenue assurance manager for the Jamaica Public Service (JPS) is somewhat of a ‘hidden figure’ when it comes to Jamaica’s landscape of pioneers and achievements. Her accomplishment pertains to her contribution in the area of utilities, spearheading the usage of prepaid electricity in Jamaica. So effective has she been in popularising this alternative method of energy conservation and management that the world has taken note, utilising her as a resource person.

McCormack, who hails from Portland, spent most of her youth in Manchester attending the Bishop Gibson High School. She then moved to Kingston to attend sixth form at the Wolmers’ Girls School. Her motto then and now remains, ‘You can change lives with kindness’, which is embedded in her DNA, thanks to her parents, who stress love and kindness to all.

To truly understand her groundbreaking achievement, one has to look no further than when as JPS parish manager for Portmore in 2014, she opted to embark on a new frontier, that of implementing prepaid electricity, when JPS announced its intention to introduce it in Jamaica. This was after many of her colleagues had expressed reluctance to handle the task as it was not only a new product, but also little known. Ultimately, it was a mixture of her gumption and grit, along with her penchant for research and data analysis honed from her stint at the Statistical Institute of Jamaica (STATIN), that made her say yes to then-boss, Keith Garvey.

“When I was researching it, I realised that worldwide utility companies were offering prepaid electricity for primarily two different reasons. First of all, they wanted to make this offer to customers who thought prepaid electricity would serve them better. Second, it would benefit the company, given that more consumers would eventually become compliant. I also wanted my Portmore team to be somewhat pioneers and we were excited to lead this project,” McCormack recalled, adding that she was excited to explore something new and confident that she would succeed.

At the time of roll-out, which was between 2014 and 2017, countries worldwide were offering prepaid electricity, and in the Caribbean region, at least four countries were ahead of Jamaica, with varying results. Not deterred, the team of three with McCormack at the helm as prepaid logistics and implementation manager, charted their own unique course of action, with the results superseding those who had tried before.

Kicking off a pilot programme in Portmore, St Catherine, involved the recruitment of 12 open-minded customers. The team recognised that they had to get these customers to understand how the new metre system worked, as their only concept of a prepaid product related to mobile services. This was coupled with having to alleviate fears of the electricity running out, as in the case of mobile credit.

“Persons did not understand that the prepaid metre was really geared towards helping persons manage their electricity consumption. It operates as an energy management tool and as persons started to manage their energy, they found that they were using considerably less and they were able to manage everyday usage based on real-time information they would receive,” McCormack explained.

Another hurdle to overcome was within the confines of the JPS, where team members were not au fait with the new product and its benefits.

“Persons were fearful of offering this new product to customers for fear of not being able to answer questions on how the metre worked. We, therefore, had to educate staff internally to understand how it worked and how the new product fitted into the JPS strategic objectives of making electricity more accessible,” McCormack disclosed, adding that up to two years was spent in training persons, islandwide.

For the most part, switching to prepaid electricity is now simple, as these specific metres can work in prepaid or post-paid mode. Only residential and small commercial businesses which use rates 110 and 220 are eligible for this JPS product.

Once feedback was received from the pilot participants, the company fine-tuned technical issues and the topping-up process. Prepaid electricity was then rolled out to customers in all parishes by the end of 2014. “We moved from only residential to include small commercial businesses after 2015 into 2016. We started being more comfortable to take to it to other parishes on a phased basis,” McCormack said.

Given McCormack’s leadership, her team would prove successful in spreading the prepaid electricity news, amassing some 10,000-plus prepaid electricity customers. Testimonials abound as the product has positively impacted the lives of many. Most of the pilot participants – 10 of the 12 original recruits became lifetime users. Landlords have also found it a favourable alternative, as they no longer have to contend with unpaid bills left by tenants. Airbnb owners are another happy group, who have found that they are able to incorporate the cost of electricity into their pricing, having adequately estimated usage. Community groups, including community centres with courts, make good use of the system, as payment moves to the users of the facility. Additionally, persons who travel for work overseas and those who live elsewhere from their home find it more convenient to have prepaid electricity in their temporary abodes. Further, those persons who did not deliberately set out to be delinquent, but were oblivious to the cost of energy consumption, find it to be a softer introduction to electricity usage.

“Our very first study on prepaid electricity revealed that customers with a prepaid metre used 35 per cent less energy than persons on a post-paid metre, mainly because they were able to access their real-time consumption. That information is now also readily available to post-paid customers with smart metres, via the MyJPS mobile app,” McCormack mentioned.

The successful implementation has not escaped the watchful eyes of the rest of the world. McCormack cannot help but feel flattered that so far, JPS has had visits from five overseas utility companies, seeking to observe our prepaid metering. “We are now considered as one of the leaders in prepaid electricity in the Western Hemisphere. We have had delegations from Haiti, St Marteen, Barbados and also the Philippines,” she informed.

One of the visits resulted in a request for assistance. The delegation from the Philippines in 2019 invited McCormack to assist them in implementing their prepaid electricity product in the province of Cebu, where they had unsuccessfully tried to do so for years. “With our intervention and sharing of our Jamaican experience and also guiding them along the way, they rolled out prepaid electricity in the Province of Cebu,” she revealed, noting that the launch was very successful.

Most recently, in May of this year, after McCormack presented on the Jamaican experience at a Caribbean Electric Utility Services Corporation (CARILEC) Conference, both St Lucia and the Dominican Republic representatives reached out to the JPS.

In explaining the success of the prepaid electricity in Jamaica vis-à-vis other countries, McCormack pointed out that the difference was in strategy. “We had a blended strategy where we introduced it generally on the market and not for any disadvantaged set of people. It is an energy management tool for persons wanting more control and a debt management tool for persons such as landlords,” McCormack stressed. She added that it was launched as a product to help everybody manage their energy consumption. This was not the case in most countries that had tried to implement it.

Ensconced at the JPS now for nine years, this mother of two children, who is currently pursuing a doctorate in human resource management, continues to amaze onlookers, who wonder how she juggles her responsibilities. In her current position as revenue assurance manager, her department oversees the billing of accounts, and the revenue payment aspect of prepaid accounts.

This one-time lecturer at the National Police College, University of Technology and The University of the West Indies, who is adept at applying human resource theories and strategies, will continue to positively impact others with her vision and innovative spirit.