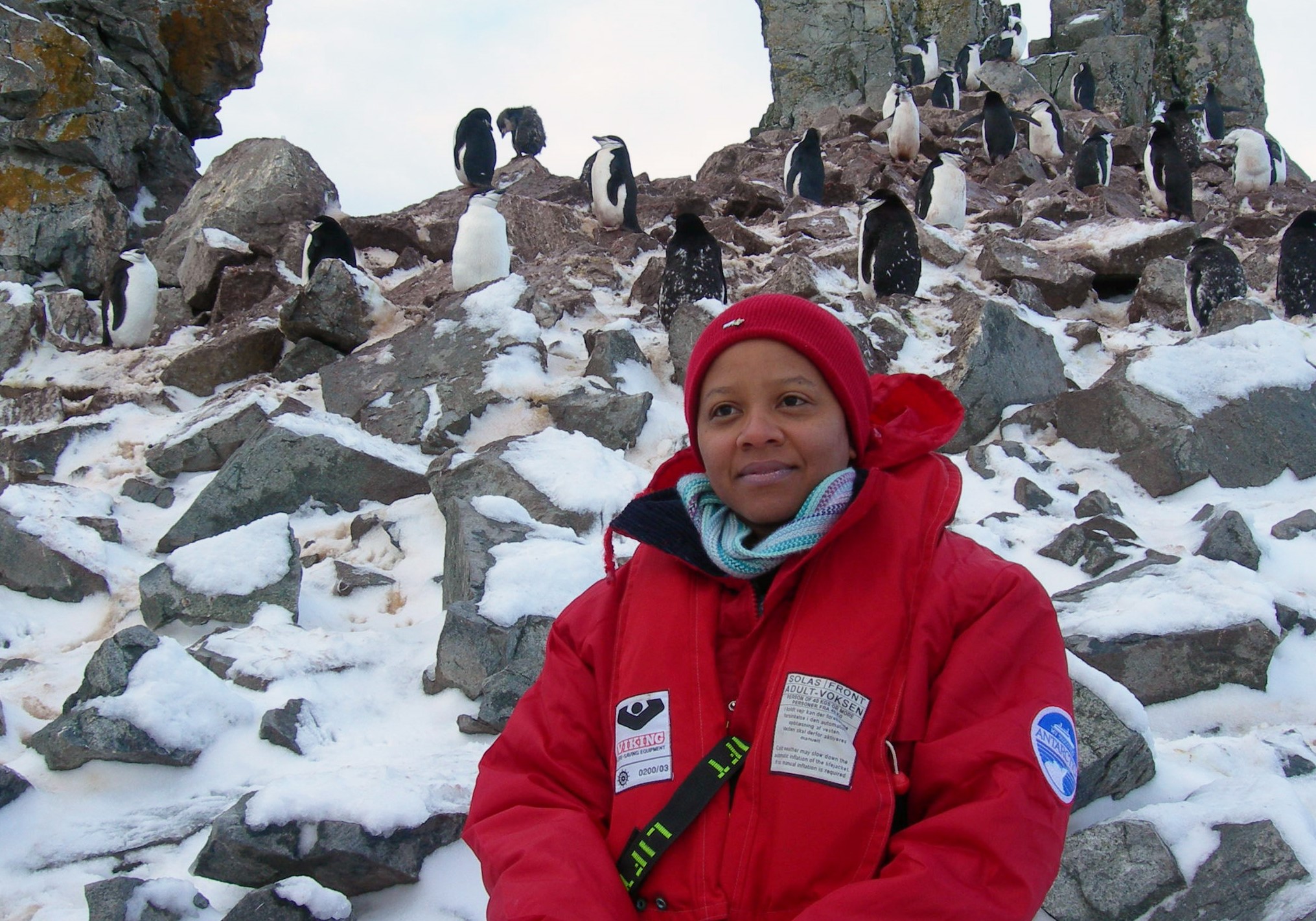 As a little girl, Judith Falloon-Reid always enjoyed reading. Growing up in Jamaica, she grabbed whatever literary material she could get her hands on, and was especially fond of National Geographic. It was from that eye-opening experience that she discovered her love for exploring the great unknowns.

“From reading, I [learnt] about how fascinating the world outside of Jamaica was, and my passion for seeing the world was born. I also wrote stories set in places I could only imagine, and that provided an escape for me,” she told Flair.

Never did she imagine that her travels would lead her to Antarctica.

Her marketing director position at Discovery World Cruises, now known as Voyages of Discovery, allowed her to tap into the cruise’s speciality: visiting exotic and faraway destinations. Antarctica, she says, was high on that to-do list. “I was also a writer for the company, so I wrote a lot about Antarctica from research, talking to the expedition teams. It just seemed like the most fascinating place on earth to visit,” she added.

She admits that she lacked first-hand knowledge, which could only be gained by visiting the magical place. So, Falloon-Reid engineered a press trip, taking journalists from five of the largest newspapers and travel magazines in the United States to review the cruise experience.

Before embarking on this journey, the writer has already visited Europe, namely, Belgium and the cities of London, Amsterdam and Paris. In the Caribbean, she has seen the shores of Trinidad and Tobago, Barbados, Antigua, St Maarten and St Martin, The Bahamas, Puerto Rico and Cuba. For Central America, she went to Mexico and Costa Rica, and for South America: Buenos Aires and Ushuaia, Argentina; Punta Arenas and the fjords in Chile. She has also seen the sites in Toronto, Montreal, Vancouver and Niagara Falls in Canada, and been to at least 25 states in the US.

“My sister sent me a long winter coat to wear before I boarded the ship and received my thick expedition parka, provided by the cruise line. I bought a thick fleece jacket with a hoodie, a couple of sweaters, a pair of warm boots and lots of socks,” she said, adding that the trick to beating the cold is layering. Other essentials she picked up on the way.

With all the horror stories she heard of turbulence while crossing the Drake Passage, she stocked up on ginger candles, a box of Dramamine, and a few seasickness patches to prevent motion sickness. The thought of continually wearing socks and shoes after being accustomed to sandal-wearing weather was something to get used to, and finding money for additional hotel days, transportation and meals out of her pocket was difficult. Luckily, she had saved for the excursion, and it was all worth it in the end.

“There is nothing like seeing God’s glory up close and personal, untouched and unspoiled by human hands. It was hands down the most amazing, awe-inspiring experience I’ve ever had. It was like visiting another world — one without pollution, so pristine, so fresh. The beauty of all that clean ice and snow against the backdrop of stark black mountains was fascinating, and even the best pictures can’t do that sight any justice,” Falloon-Reid reflected.

Walking around on the continent was beyond anything she could have ever imagined. She saw penguins in the wild, just going about their daily business. “They didn’t care that we were there, but every now and then there would be one that would look at me oddly or do something funny, like turn its head all the way around.”

Another interesting fact she shared: Penguin poop is pink, and it stinks. The colour is due to their consumption of krill, which is pink, so it is reflected in their faeces. She fell in love with the seals as well, and marvelled at the sheer beauty of the icescapes. Massive icebergs, floating ice, and whales breaching were also among the highlights, “To say it exceeded my expectations would be an understatement.”

She was so moved by the experience that she did a live staging of her exhibition at the National Library in February. She has gone on to offer the experience of viewing images, reading her book and engaging in discussions virtually. “The response was overwhelming. I had approximately 7,000 people view the virtual launch, which led to a flood of messages from viewers who were fascinated by the experience. But even more so, inspired by a Jamaican woman who went to Antarctica just because she could.” Out of the exhibitions, the company Travel 2 Educate was formed to explore a partnership with the National Library of Jamaica and the Jamaica Library Service to expose children to the joys of unconventional educational experiences.

With COVID-19 restricting travel plans with her husband, she hopes that they can pick up on their list of destinations to visit once the world reopens; and says she would love to cross into the Arctic Circle.

“I believe God gave us life so that we could live it. Not hoard it. Not live in fear of losing it, and certainly not to spend it sitting in one space, planted like a tree. The world is still a beautiful place, despite man’s every effort to destroy it and other [other]. The magnificence, education and experiences are worth facing and fighting your fears,” she said.

Her travelling advice, “Do your research and plan your trip carefully, so you know what is safe and what isn’t before even booking your trip. Learn about the customs and practices, so you know what to expect, and you can make informed decisions about where to travel and when to travel. And start with baby steps. Try travel to a unique Caribbean island first where the culture is similar, but different. There are beautiful and unique experiences less than two hours away from Jamaica in Costa Rica, one of my favourite places on earth. So start there.”