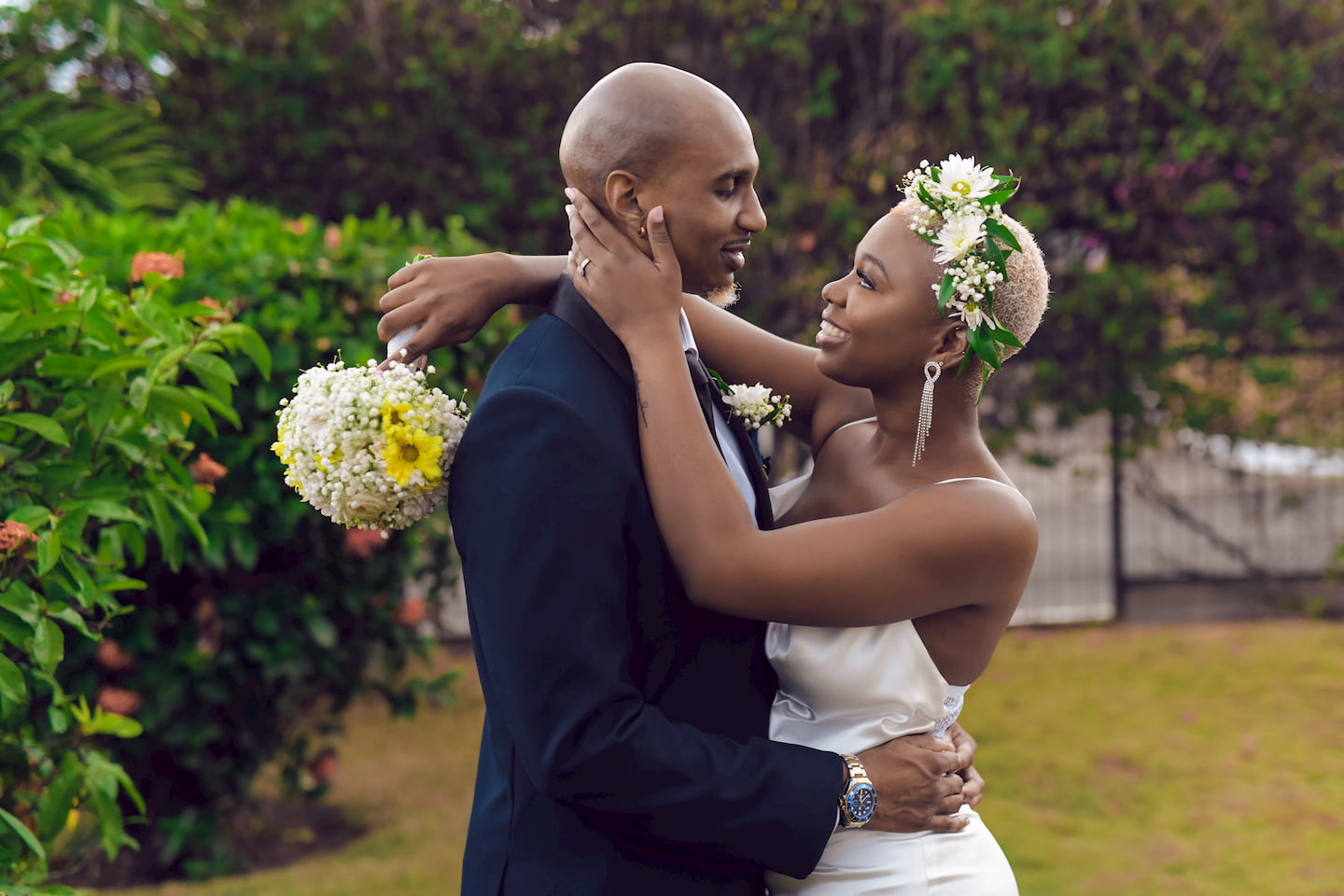 Leap into love with the Gordons

English singer, songwriter, and peace activist John Lennon once shared these eloquent words of wisdom: “Love is the flower; you’ve got to let it grow.” Planting the seed of affection that budded into this whirlwind romance, this tree, rooted in loyalty and harmony and watered by consistency, later blossomed and bloomed into beautiful love. That is the tale of Shawneil Bailey-Gordon and Adrian Gordon.

The Faculty of Education and Liberal Studies (FELS) staircase at the University of Technology, Jamaica, is where Shawneil first caught ‘the feels’ for Adrian. They had already been rolling in the same circle since that location hosted the main group’s hangout spot during college back in October 2011. Surrounded by mutual friends, it was only a matter of time before they got closer.

Shawneil kept her eyes on the handsome prize since the first introduction. But Adrian told Island Wedding, “To be honest, I found her quite annoying when we first met.” Shawneil revealed why that was the case. “I remember he had this mini laptop, and as a way of getting his attention, I would constantly borrow it until it died, which was, most times, right before he needed it.” That didn’t last, but it did break the ice and transitioned into them making a unique connection.

Describing him as kind, logical, ambitious, opinionated, and honest, Shawneil says that what stands out the most is Adrian’s drive. “He’s very self-motivated. When he sets out to achieve something, he gets it done. It’s so beautiful to see him attain his goals day by day,” she said. And as for how he has contributed to her individual growth, he has been a big motivator, keeping her grounded with advice and love.

Adrian finds his other half to be fun-loving, driven, stubborn, dramatic, and emotional, and he adores all of her natural qualities. “Shawneil has assisted me by exposing me to multiple structures and processes (she had originally developed for her business) that I now use in my professional life in order to increase my efficiency,” he says. In addition, he said, “She has also introduced me (us) to therapy, which I was initially resistant to but now believe has opened our eyes and helped us to better understand each other.”

They were approaching their eighth anniversary together when Adrian pulled off a surprising and sentimental proposal.

According to Shawneil, their entire proposal process was unorthodox. In agreement that they would get married on their eighth anniversary, they were already planning their wedding. “I didn’t expect an official proposal, based on this,” she confessed. Adrian had other plans.

One week prior to the wedding date, he took the liberty of sneaking in an unplanned proposal. “After purchasing the wedding ring, I wanted the proposal to be a total surprise,” he said. After talking with close friends so as to not draw any added attention to a grand occasion, this knight decided to entertain his queen with the typical Saturday night out of food and fun. He elaborated more on the night’s events. Everything was going according to plan, and he was able to slip away to place the ring he had been keeping in its original box into the glove compartment of his car.

The night was seemingly normal on Shawneil’s end, but it was about to take a fascinating turn for the better. Adrian suggested that they let the night take them to an intimate spot at The University of the West Indies’ Mona campus that they would frequently visit while they were dating. After all, they were already close to the location, so it made sense.

Once they arrived, he sat patiently, watching her exit the car and start the journey on foot to the familiar territory. After she took a few steps, he quickly reached into the glove compartment for the ring he had hidden, slipped it into his pocket, and casually left the car to follow her. “To my dismay, the grass was wet on this particular night, so right then and there, I knew that my original plan would not go smoothly. In the spur of the moment, I decided I needed to make a move, and fast. I retrieved the ring from my pocket, sunk on to one knee, and called out her name. The rest is history,” he said.

With both of them self-employed, saving was the main motivation behind them having a small wedding. They originally spoke about a quick registry wedding, since they wanted something private and meaningful, but they eventually pivoted towards including family. They settled on inviting 16 guests. Kimrose Weddings, Shawneil said, did an excellent job in planning the nuptials, easing stress while incorporating do-it-yourself elements into the decor.

On February 29, the couple’s original dating anniversary, Shawneil and Adrian became husband and wife. Well aware of the leap year, they already had developed a celebration strategy: celebrate on the 28th and then do a big bang on the 29th. This year’s big bang was the wedding.

Saying ‘I do’ in a private ceremony at his parent’s house also held great significance. The newly-weds had a lot of firsts there, like the first time Adrian said ‘I love you’ to Shawneil. “I was happy to have been able to do the full cycle right where our love grew,” she admitted.

From the decor and the support to the photography, everything, Shawneil revealed, was perfect, “I literally remember it all and smile randomly when I think of the day.” Favourite wedding moments include the reciting of written vows while gazing into each other’s eyes and holding hands. Feeling that connection and love, Shawneil could not wait for the pastor to say, ‘You may now kiss the bride’. “We snuck a few kisses before then, though,” she declared with a laugh.