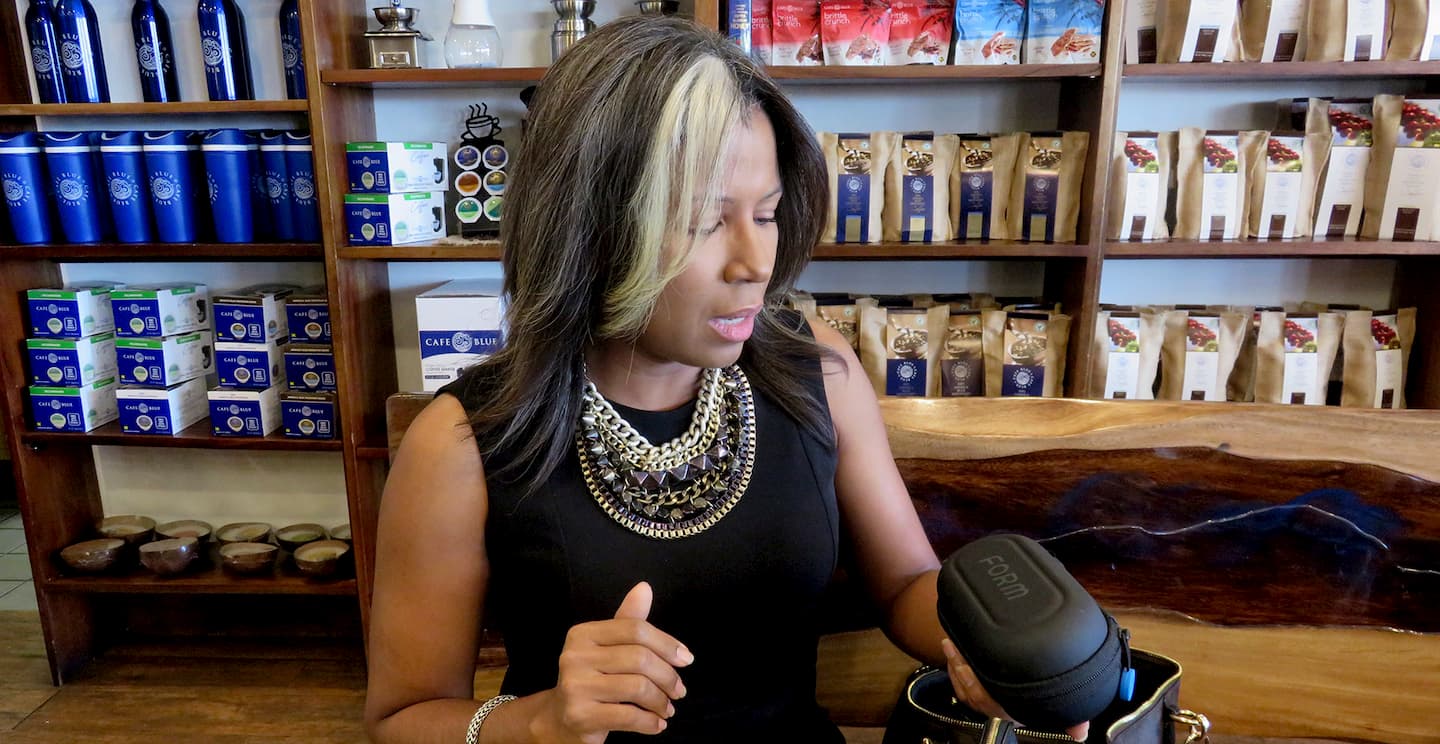 Let’s ‘tech’ about it with Stacey Halsall-Peart

“My teen daughter always wants to go to Starbucks for her designer coffee, but I try to tell her to stay local.” Stacey Halsall-Peart, in her commitment to stay local, chose Cafe Blue for us to meet up so we at Flair could take a peek into how a woman in tech – Stacey is the COO of Advanced Integrated Systems (AIS) – keeps sane and organised.

Her classic ‘Signature Canvas’ Coach tote isn’t the only signature look she’s got, Halsall-Peart herself is hard to miss with that incredibly stylish and fashion-forward streak of grey framing her face and a statement necklace to accentuate her neckline. “Oh, hi!” we were greeted with an excited – and maybe relieved – grin and a hug. See, she’d admitted to looking us up before meeting and being a little unsuccessful, so in a sea of coffee drinkers and breakfast munchers, it’s quite easy to understand.

The first thing out of her bag was a smaller ‘Signature Canvas’ pouch she called her satchel, perfect for taking in place of her normally heavy bag. See, like all the ladies before her, Stacey went against house rules and cleaned her bag of anything she (or especially her teenage daughter) may find unsavoury. We respect that and it wasn’t like her bag wasn’t full of our usual favourites! That wasn’t the only bag in her bag. Halsall-Peart followed up her mini bag with an even mini-er Ziplock pre-packed with her daily vitamins. “I also pre-do lunch and dinner,” she said before admitting, “I’m generally disorganised, so I try to get those things out of the way. It’s like an organised disorganisation” she joked. The last pouch from her bag is a colourful pouch covered in sugar skull motif which she got from a trip to Mexico. “Everyone there looked like my grandmother,” she laughed. “My grandmother has no Mexican blood in her, but here were all the little women who looked just like her.” The sugar skulls remind her of her grandmother, who she described as having been the most precious person on Earth. She’s totally family-oriented, with three children she sweetly described as ‘amazing’.

A little jar in hand, she’s bashful. “So umm, I have a problem with salt.” The jar in question is an almost empty gourmet Scotch Bonnet Salt from ‘Simo’s Bread and Catering’. “This one didn’t last me six months because I put salt in everything, it’s fantastic and I still have just enough!” That’s all the recommendation we need, and now we’re dying for just a pinch of that salt! (So Christina, if you’re reading this HMU!)

Like all the glasses wearers around the world, Stacey doesn’t wear her glasses as often as she ought to, but we can say she does take them with her, along with a pair of prescription sunnies in her stylish Coach pouch. Attached to her bunch of keys is her ‘Spry Training’ dongle, which gives her gym access. Now, she didn’t ask us to do this, but Stacey is very happy to be an active member of Spry, and she loves her trainer, and we’ve seen those videos and so we think he should go a little easy on her. It’s pretty intense there, but Stacey who runs marathons swims regularly and has a walking group, fits the bill, even though her energy is as mellow and inviting as ever.

Speaking of swimming, Stacey is the owner of the coolest pair of goggles ever – gifted from maybe the best friend on Earth? We haven’t done a survey but we’re confident about the numbers. They are called ‘Form’ goggles and they are totally digital, think Google Glass but for the pool. They give her metrics which calculate her strokes count, her calories burned, her heart rate, and it has a handy-dandy app which syncs your data. The perfect gift for an active techy.