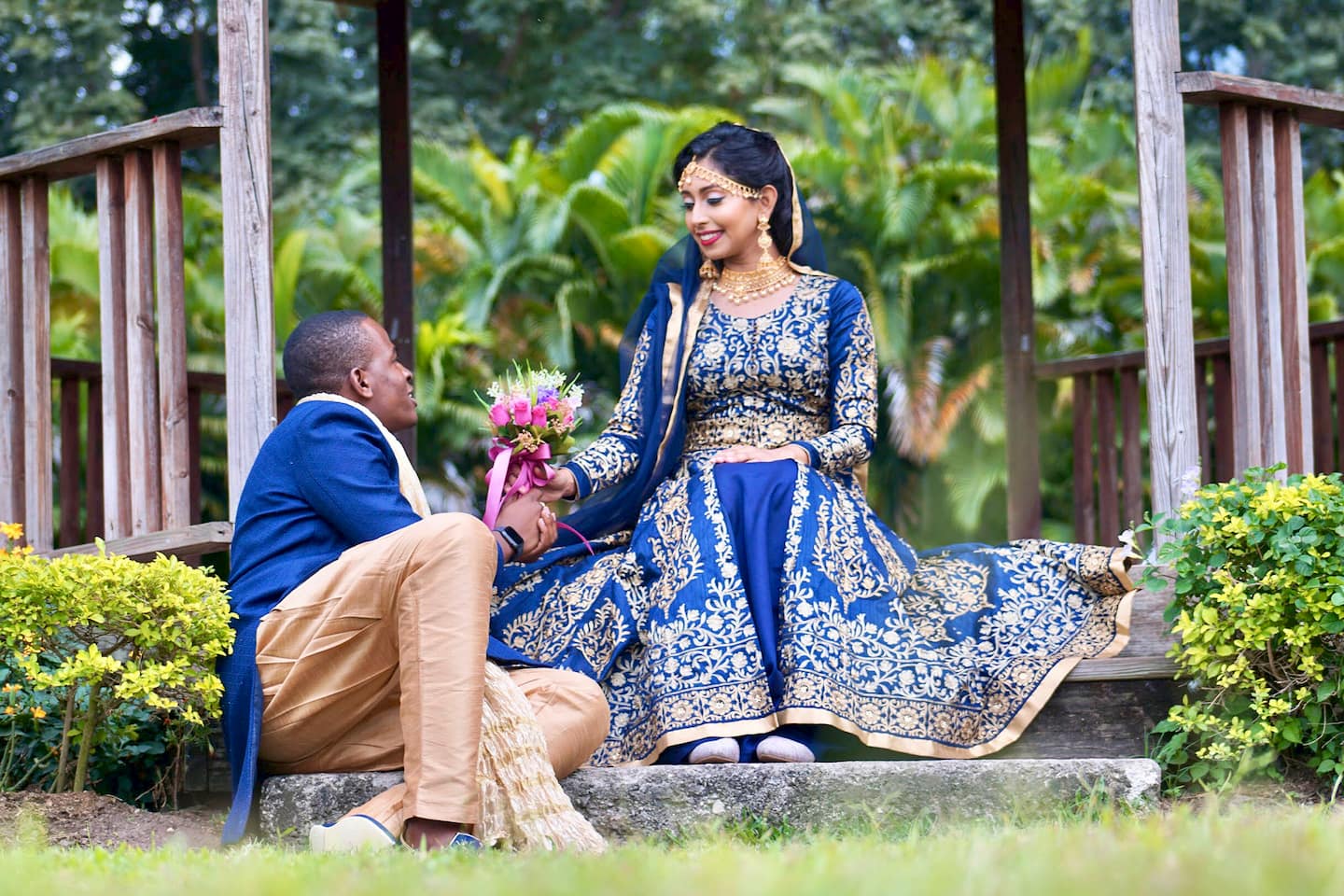 Love Beyond Borders- A Tale of Two Cultures

Love beyond colour, race, religion, cultures and borders might be seen as an illusion, according to author Emmanuel Dagher, but it is the enchanting fantasy-turned-reality for ardent lovers, Dr Maisha Reza and her husband Odayne Haughton.

The two first laid eyes on each other in the beautiful island of Fiji in February of 2018, representing the Commonwealth Students Association at the 18th Conference of Commonwealth Education Ministers. Both youth advocates, Maisha, the chairperson of the CSA, represented Singapore, and Odayne, the team’s adviser, repped the land of wood and water.

“She is a perfect balance of beauty with brains. Holding a PhD in Muscle Biology, she came across as a strong, well-educated, independent and confident woman. I was floored when she gave the opening speech addressing dignitaries with absolute finesse in the conference hall with the Secretary-General of the Commonwealth, education ministers and representatives. Definitely a lady of class and elegance,” he told Flair Island Wedding.

Convinced that he could win her over with his Jamaican charm, he started developing feelings for her and noticed that her eyes would sparkle brighter and her smile would become wider when she saw him. “That poured this feeling of warmth in my heart in a way I never felt before. From the moment I met her, I felt an inclination to tell her anything. The purity and kindness of her heart broke down all the barriers around my heart,” he professed.

The lovebirds-to-be made a commitment to spend the next two months getting to know each other with complete honesty and openness, to see where the journey would take them. But with his return to Jamaica, and hers to Singapore, a 13-hour time difference stood between them. Prioritising each other, they jumped over the clock hurdle together, spending hours in their respective times talking via WhatsApp video call, FaceTime and Facebook Messenger.

Odayne knew that his heart belonged to her, but he needed to be absolutely sure that he was not experiencing mere infatuation. So, a few months later, they reunited in London and felt an even greater connection. This face-to-face interaction sparked the decision to become a couple.

Little did they know that time would be the least of their struggles.

As a Singaporean Muslim woman from a wealthy family, Maisha’s culture stipulates that women of good families have their marriages arranged by their families. When she met Odayne, she was in the initial stages of the arranged marriage process with a man of whom the entire family approved, after a two-year quest. After casually mentioning that she was to be wed in the following six months, a curious Odayne wanted to know more, particularly how she felt about it. “She was far from in love and just settling to honour her family and make them happy. I remember asking her ‘What’s a marriage worth being lived without love and emotions?’ Her response was, ‘In my culture, a lot of wives grow to love their husbands over the years to come.’ I actually did not understand how serious this was, but I knew that whatever I did had to be done swiftly as I did not want to lose her,” he revealed.

Determined, he gave himself the same six months to let love intervene in this arranged situation. It was a delicate balance, he highlighted, since she was afraid to disappoint her family. When she broke the news to her family, they were shocked that she had chosen someone from another race and culture. Their lack of exposure to Jamaicans and West Indian people made them terribly worried for their daughter: the predominantly declared state of emergencies help drive that fear, Odayne shared. Disrupting the arranged marriage caused Maisha emotional turmoil. “Her family decided that they could not approve their daughter marrying a black man from a third-world country: a Bengali Singaporean wedding a black Jamaican would not work.”

Maisha weighed in on the ordeal. “When we met again in London, he expressed his feelings to me and assured me that I would never regret not conforming to family or cultural norms. Then the unrest within my family started. After months of unsuccessful reasoning and wanting to allay the fears of my family, within month six, I left Singapore and came over to Jamaica for the first time, where he introduced me to his family.” Then there was the matter of cultural differences among each other. Her conservative nature often clashed with the liberal islander – festive ideas came as a shock to them both and language played its part in muddying the waters. For instance, he shared, “When I said in Patois ‘di food bad!’, she would say ‘oh no, I’m really sorry to hear that’, when in fact everything is great. And when my female friends called me ‘love’ as an endearing term of friendship, love was reserved only for a romantic partner in her culture.” Small misunderstandings could blow up disproportionately. But they never entertained the lifestyle of bruised egos. Instead, they maintained honesty and tried their best to defuse the issues quickly.

Speaking of cultures, that independence that Odayne loved meant that he had to pass the checklist. She clearly outlined her requirements, religious principles and values for her husband. This was far from a deterrent: in fact, her beloved believed that with love on his side, he lived up to her standard. And he did, through his words and actions, with one exception – religion. Raised by a Christian mother and Rastafarian father, he began learning more about the Islamic faith. “Over a six-seven-month period, I visited the Islamic Council of Jamaica and learnt what Islam was about, then proposed to her that I had embraced Islam as a part of my life, and worked on myself so that I could be the best imam (head of the home) for my wife. She was there with me on every step of the way.”

It was a sullen evening in London, according to Maisha, and the smitten pair walked the London Bridge chatting on why things wouldn’t work, given the fact they are from two different worlds. “It was then and there that he pressed me to choose love instead of my family’s decision and extended a ring, promising me that he would be the husband of my dreams. Of course, I said yes,” she shared.

With the relationship mostly long-distance, they met only four times physically before tying the knot.

The super-intimate gathering saw immediate family celebrating the nuptials of Maisha and Odayne recently in a private Islamic ceremony called the Nikah here in Jamaica. Filled with lots of love, blessings, laughter and tears, the highlight of the day for the bride was when he cried while she was delivering her wedding speech after the ceremony. “I was overwhelmed with happiness, gratitude and relief when the sheikh ended the ceremony, announcing that finally, she was now my wife!”

The wedding outfits were representative of the Bengali culture and the food and music were Jamaican.