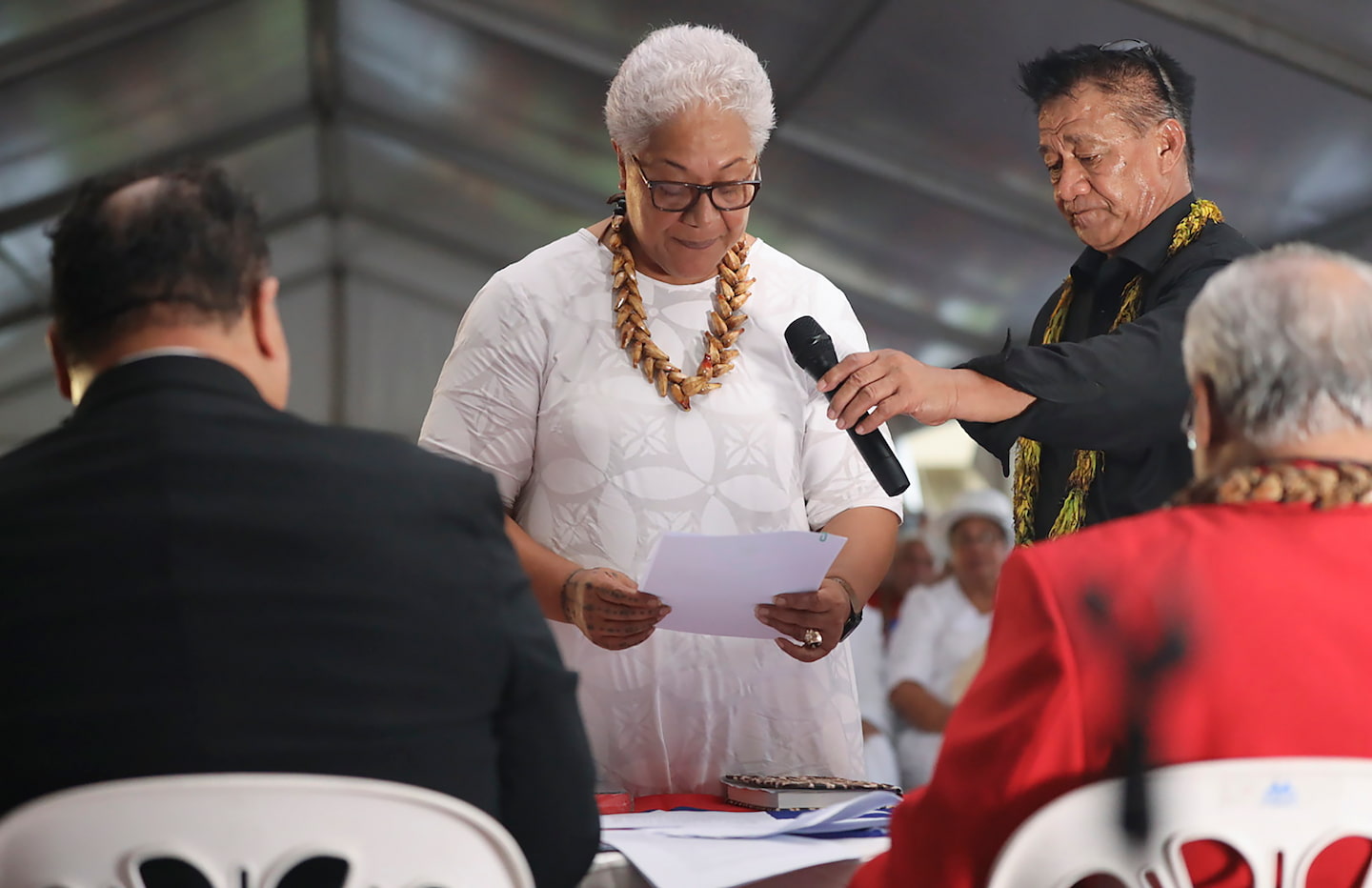 Samoa was plunged into a constitutional crisis Monday when the woman who won an election last month was locked out of Parliament, and the previous leader claimed he remained in charge.

The fast-moving events marked the latest twist in a bitter power struggle that has been playing out in the small Pacific nation since it elected its first female leader. Not only is Samoa’s peace and stability at stake, but also its relationship with China.

On Monday morning, Prime Minister-elect Fiame Naomi Mata’afa and her supporters showed up at parliament to form a new government, but were not allowed inside.

She and her FAST Party later took oaths, and appointed ministers in a ceremony held under a tent in front of the locked Parliament, which opponents said were illegal.

The nation’s Supreme Court had earlier ordered the Parliament to convene. And the constitution requires that lawmakers meet within 45 days of an election, with Monday marking the final day by that count.

But Tuilaepa Sailele Malielegaoi, who was prime minister for 22 years before his unexpected election loss, doesn’t appear ready to give up power. He was already one of the longest-serving leaders in the world.

The nation’s head of state, Tuimalealiifano Va’aletoa Sualauvi II, wrote in a proclamation last week that he was suspending Parliament “for reasons that I will make known in due course.” On Sunday, the Parliament’s speaker backed him.

After Fiame was locked out on Monday, Tuilaepa held a news conference proclaiming his government remained in charge.

At his news conference, Tuilaepa said: “There is only one government in Samoa, even if we are just the custodian government. We remain in this role and operate business as usual.”

Meanwhile, Fiame told her supporters: “There will be a time when we will meet again, inside that House. Let us leave it to the law.”

After the FAST Party held its tent ceremony, Tuilaepa held a second news conference to say that action would be taken against party members.

“This is treason, and the highest form of illegal conduct,” he said.

In New Zealand, Prime Minister Jacinda Ardern said that despite the volatile political situation, there seemed to be relative calm among Samoa’s people.

Ardern said she strongly believes that both the election outcome and the judiciary’s decisions should be upheld, but stopped short of saying Tuilaepa should step aside.

Fiame’s election win was seen as a milestone not only for Samoa, which is conservative and Christian, but also for the South Pacific, which has had few female leaders.

An advocate for women’s equality, Fiame, who was born in 1957, broke new ground during her campaign by going on the road and robustly criticising the incumbent.

She has pledged to stop a $100 million port development backed by Beijing, calling the project excessive for a nation that’s already heavily in debt to China, according to news broadcaster RNZ.

Fiame said she intends to maintain good relations with China but has more pressing needs to address, RNZ reported.

Last month’s election initially ended in a 25-25 tie between Fiame’s FAST Party and Tuilaepa’s HRP Party, with one independent candidate.

The independent candidate chose to go with Fiame, but meanwhile, the electoral commissioner appointed another HRP candidate, saying it was required to conform to gender quotas.

The head of state then stepped in to announce fresh elections to break the tie. Those elections in the nation of 200,000 were scheduled to be held last week.

But Fiame’s party appealed, and the Supreme Court ruled against both the appointed candidate and the plans for the new elections, restoring the FAST Party to a 26-25 majority.