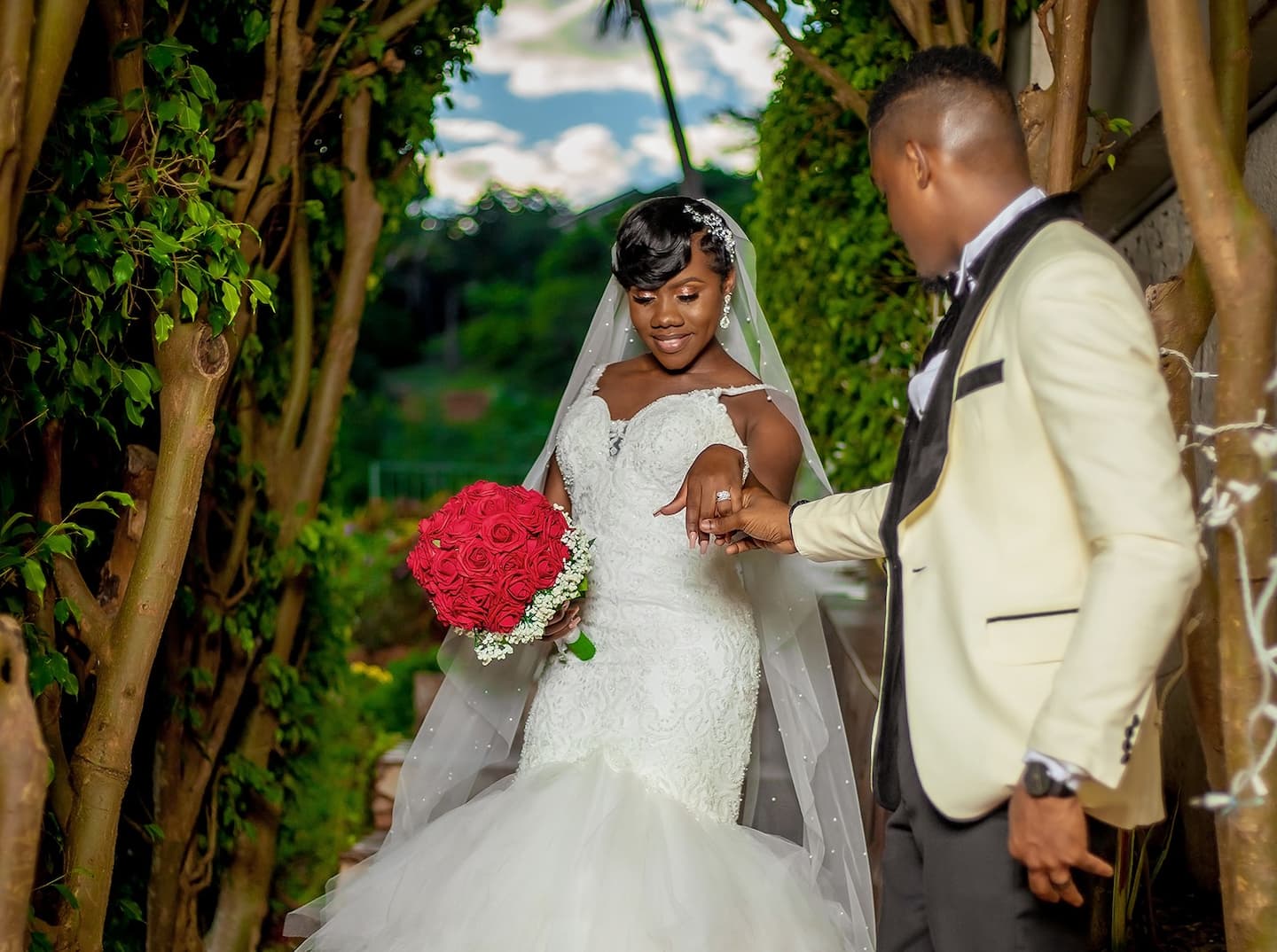 ‘Smithen’ with Mr and Mrs Smith: High school sweethearts say ‘I do’

At 14 years old, a young Davion Smith walked into the library of Clarendon College. But he was no longer interested in books. He was too busy reading the beautiful face of Rubiann Mitchell. The lad was smitten by her presence, noting, “She had the most gorgeous eyes. The rest of my thoughts, I can’t tell you,” with a hearty laugh.

He had noticed her for a while, but was a bit reluctant to make his approach because she was a year ahead. But fate created an opportunity and he mustered up the courage to talk to her. “My first thought was that he was very handsome and charming. He was always jovial and always trying to make everyone laugh,” Rubiann revealed. The attraction from the very start was mutual.

As time went by, the pair quickly developed a wonderful friendship, but Davion wanted more. “Maybe a year or so after we met, I knew I wanted her to be my girlfriend. And it was entirely my doing,” he confessed. Rubiann recalled him constantly asking her to be his girlfriend. When she spoke to her friend, Crissy Harris, about it, her exact words were, “Just say yes. It’s not like it’s anything serious”.

Davion also admitted that even though she decided to give it a try, he never had the slightest clue that he had met his wife. “Surely at 15, I wasn’t in it seeking a lifelong partner. I was doing what teenage boys do; going after the girl I liked,” he said. The two became high school sweethearts back in 2007 and have since then held each other’s hand through trials, distance, errors and triumphs.

Rubiann continues to be blown away by her beloved’s smart, hardworking, dependable, irreplaceable and affectionate nature. “He’s also a great communicator, always expressing how he feels about situations. Davion is my biggest fan. He motivates me to be the best version of myself. He’s my confidant. He makes me feel like I can accomplish anything. He’s the wind beneath my wings and every day I thank God for him,” she declared. Although their relationship has seen its fair share of rough patches, she is happy that they weathered the storms and never gave up on each other. “We always say that God is the reason we are still together,” she added.

While he is fond of the fact that she is a lover of life, Davion is truly impressed by the fact that she pushes him to live a life of gratitude as well. She is also supportive, encouraging, challenging in a good way and astute with her amazing sensibilities. “Whether it is that you’re in a business meeting, or just navigating the street life, she’s the one you want in your corner. In many respects, she has made me into the man I am today.”

The loving duo were together for a decade before Davion asked the love of his life to be his wife. Both revealed that the proposal was far from romantic. It instead captured a genuine and intimate moment of two people who wanted to spend the rest of their lives together. So they saved the fairytale for their wedding day.

The majestic main event was a result of the hard work put in by family members, friends and the couple. Closing off last year with a bang, Davion and Rubiann were joined together in holy matrimony on December 20, 2020.

The garden of City View Hotel saw streams of white, symbolic of their pure love, bountiful roses to mark the growth and development and scattered rose petals to signal the countless years they’ve been together. Rubiann was a sight of angelic beauty in her gorgeous wedding dress, courtesy LuxBride Ja. As her eyes met his, a dapper Davion was overcome with emotions. She too could not hold back her tears of joy as she walked towards her husband.

“The wedding was emotional; something I never expected. It was a beautiful celebration of our love. It turned out to be more than a ceremony but something that left us feeling more connected to each other having written and exchanged our own vows,” Mr Smith shared. While for Ms Smith, the wedding was just magical. “Everything was perfect. We were a little concerned about the weather as it started raining in the afternoon. However, the sun came up right in time for the ceremony to begin, creating the perfect atmosphere.” Her best moment was walking up the aisle and seeing her husband, “It became so real for me that we conquered all the odds over so many years and I finally got to marry my best friend.”