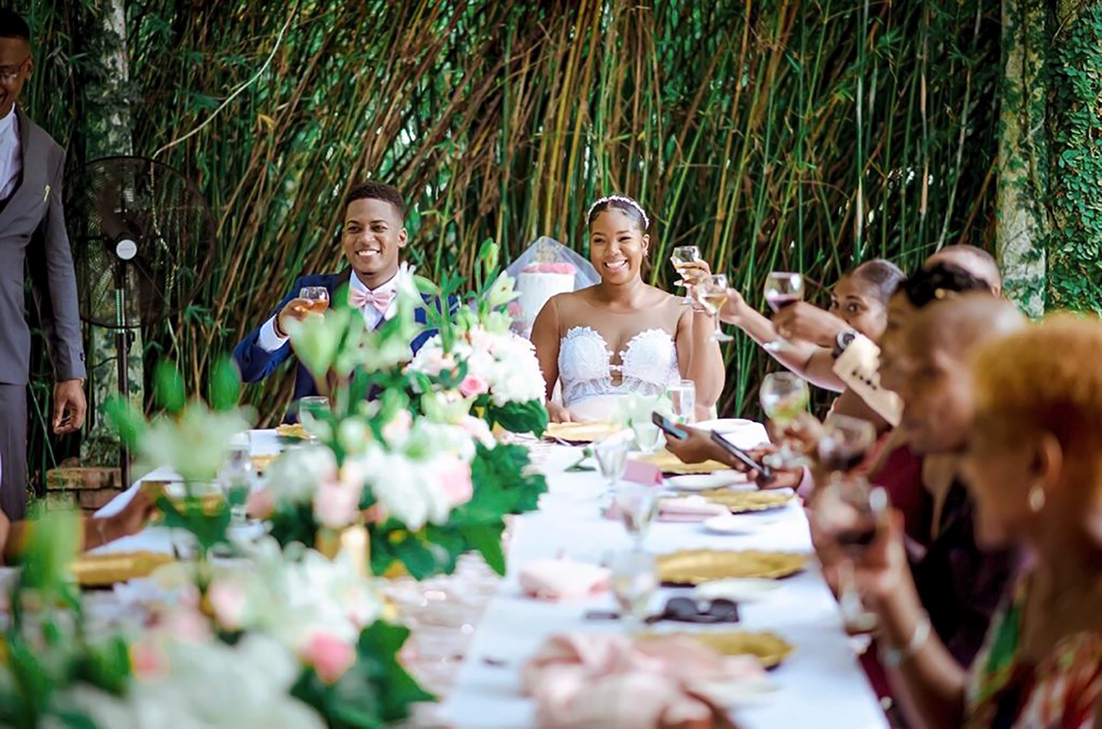 Teenage love is often described as infatuation, but those who experience its powerful, soul-stirring effects might say otherwise.

Stefan Fennell first laid eyes on Shervaughnnie Hutchinson at 13 years old while at Sovereign Centre in Liguanea, Kingston. The former track star explained that he met her through a mutual friend. Shervaughnnie didn’t shy away from her feelings, giving in to both excitement and nerves, “I thought he was so cute. I was so nervous I couldn’t even hold a decent conversation.”

Stefan shared a different sentiment about their first meeting. He found the tall and beautiful Shervaughnnie to be absolutely perfect. “We instantly fell for each other, and that’s where the initial connection began,” he told Island Wedding. Mesmerised, he said he couldn’t stop thinking about her. He wanted to get to know her better, but to his dismay, she lived overseas.

That distance proved too much for their youthful exuberance to bear. The two lost contact, but were later reunited by fate five years ago and picked up where they left off, rekindling their romance in the beginning of a new and exciting ‘love-venture’ together.

When Sher, as Stefan lovingly calls her, visited Jamaica at that time, they decided to go out on their first official date. The couple agreed that it was everything they could’ve ever dreamt of. He showed her that chivalry was not dead, and she proved to be the girl he knew he wanted to be with. The duo started singing in a natural progression to the tune of boyfriend and girlfriend. This ‘hit track’ dropped in the summer of 2016.

Aside from her beauty, Stefan says he is moved by Shervaughnnie’s kindness, ambition, loyalty, and loving and adventurous nature. “She’s just one of a kind. She’s always giving more than she can give, always looking to achieve at the highest level. She loves to go out and try new things, like parasailing, travelling and snorkelling. And she ensures that I am extremely loved with kisses and hugs or food,” he pointed out with a laugh.

She motivates him to be a better person, both for himself and her. “I became more successful in my company, as well as a better man, by the maturity I gained while being with her — being more responsible, ambitious and driven to want the best of life. She ensures there is always love and affection in the relationship, and makes sure our quality time is always [the] number one priority,” he said.

Shervaughnnie shared that her darling is loving, openly expressive, both verbally and physically, loyal, protective and goal-oriented. “He encourages me to live a life that truly makes me happy and not one that pleases others. He makes the conscious effort to pour love into our every interaction. He is mindful of his words and actions and remains consistent in what he does,” she revealed.

Three and a half years after they made it official, Stefan decided to take things one step closer to their happily ever after. The plan was set to whisk his then-girlfriend off to Strawberry Hills on an intimate date for two, where he would propose to her. But he recalled that the love of his life had a fear of heights. So he improvised, adding a sentimental touch by popping the question where they went on their first date.

On the hill in Hellshire, under the moonlight, Stefan asked Shervaughnnie to marry him. “It was just us, and that’s how she and I like it. A perfect night with us alone under the moonlight.” His fiancée was blown away by the sweet surprise, “When he proposed, I felt honoured and grateful that God brought us to this point,” she said.

The blushing bride-to-be shouldered most of the wedding-planning duties, receiving assistance from family, her best friend, and Jillian at JB Events.

On October 10, on the sequential date 10/10/2020, the couple officially became ‘Forever Fennell’. Bellefield Great House was chosen as the ideal location for the significant occasion. Other than the pending inclement weather conditions looming over the day’s event, the wedding was all that they had hoped for and more.

A handsome Stefan paired cool black with royal blue, adding a pop of pink in the mix. But stealing the nuptial show was the gorgeous bride. She said yes to a unique sweetheart cut dress, boasting a plunging neckline and luxurious train. As this angel floated up the aisle, she was regal, elegant and radiant.

COVID-19 restrictions dictated an intimate gathering of guests, but the beautiful bride revelled in this smaller setting since this was her preference. “The day was incredible!” Shevaughnnie remarked. “So many people pitched in to make the day as amazing as it was. I got my dress from Luxbrideja. It was perfect. The decor done by JB Event was perfect. Bellefield Great House was perfect. I wouldn’t have it any other way,” she gushed.

The groom confessed that his favourite wedding moment was seeing his beautiful bride, now his wife, for the first time in her beautiful dress, “It was nerve-wracking but so breathtaking.” While for the bride, “The best moments were being with Stefan at the altar and heading off to our honeymoon. I was so happy we made this big move!” she said.