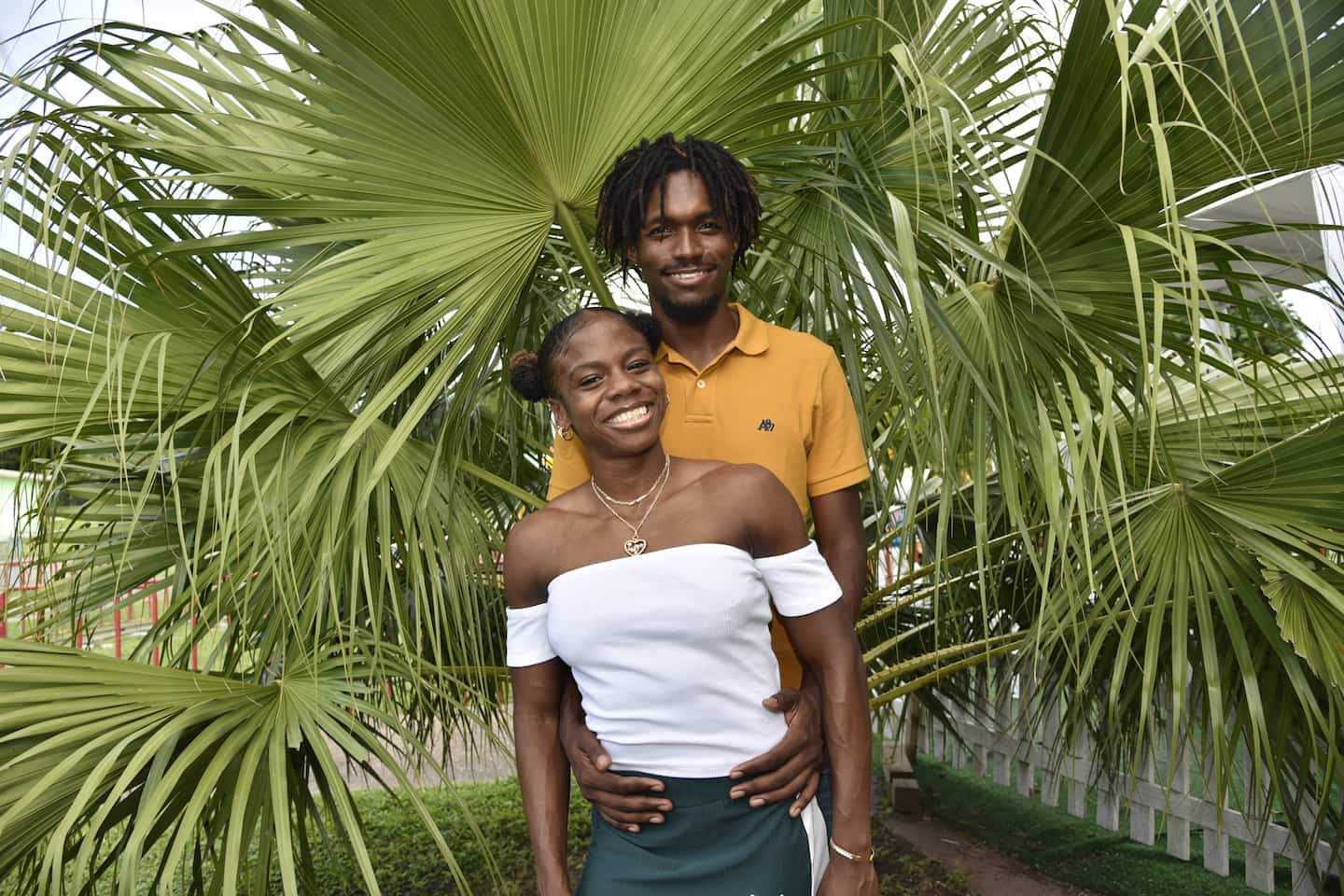 A young Mathue Tapper first laid eyes on the talented Megan Simmonds on television while she ran at the Carifta Games back in 2010. There, he watched her in awe and was immediately one of her biggest fans. A decade later, he celebrated her success as the first Jamaican athlete to medal at the Olympics in the 100-metre hurdles. Only this time around, he stood proudly and confidently as her husband and coach.

Still marvelling at Megan’s stellar performance, Mathue told Take-Two with Flair, “After she crossed that finish line, I celebrated so much that I jumped the fence. I was so excited; I couldn’t even breathe.” The Olympic bronze medallist nodded in agreement, beaming with great pride as she watched her husband relive the excitement.

The dynamic duo never thought for a minute that they would become an item. But after meeting face to face at Sovereign, they became best friends since both were in other relationships at the time. When they each called it quits, Megan shared that she was trying to set him up with one of her friends, but those close to them saw a spark igniting between them and encouraged the two to give it a try. By 2011, they were an inseparable couple, but didn’t quite date. “People date in Jamaica?” the track star exclaimed. In reality, the young and in love pair only hung out at the other’s house after high school; and in college. “I was enthralled in Mathue. It was just me and him,” she confessed, to which her beloved candidly added, “She’d be in classes, I’d be outside the door. I’d be in classes; she would be outside the door. It was bad.” She recalled a time when her significant other made a ‘Happy Birthday’ sign and hung it outside of her class for the special occasion. The hopeless romantic in her melted at the beautiful gesture.

Five years later, in 2016, Mathue knew he wanted to spend the rest of his life with Megan, so he asked her to be his wife. She happily said, ‘Yes’. Despite their initial wishes of a quick elopement, the two had a big wedding, witnessed by family and friends, all thanks to Aunty Pauline, Megan’s aunt. “That was one of the happiest days of my life. If you’re thinking of having a big wedding, do it. It’s worth it,” Mathue reflected on the day he became Megan’s husband.

He would also bear another title. Determined to have Megan’s back, no matter what, he stepped in to fill an unexpected role in her life. Megan struggled to find a coach or a training team that was the right fit. Mathue, who was running at the time, a track and field coach at Immaculate Conception High School for four years and a physical education teacher and coach at Richmond Park Prep School for almost two years, decided to step in and be Megan’s coach full-time. Two years in, she medals at the Olympics. That’s a huge win in their book!

Since Flair was in the presence of athletes at Funland Jamaica Amusement Park, we decided to get festive and competitive, getting each to state honestly their medal ranking when it came to holding down responsibilities in their union, by selecting gold as their best and bronze as their worst. For investments, Mathue gave himself a silver, while Megan went for the gold. The two were golden when it came to finances. She edged him out of the top spot for household chores, but dropped to a bronze when it came to track and field. Mathue collected his gold.

He copped the gold for romantic gestures and reconciling after an argument, and she came in second. She demanded gold for making up when it counted. Mathue is golden as a lover of the outdoors, and came first as it pertained to being an introvert. Megan collected silver in the outside category and didn’t even qualify for the latter. With a vibrant personality like hers, how could she?

Here’s where it gets juicy. He wins as a morning person, and she is a night owl. And for lovemaking, he strikes gold.

The trivia saw them in a heated match-up. Out of the block in confidence, Megan got the first question incorrect. Once Mathue was in possession of the board, he searched her eyes for clues, but he was also incorrect on the first go. The contestants remained energetic and competitive, and managed to tie at four points each. The one to get the next question right would win the championship. Mathue missed out on the chance when he failed to correctly say in what order she washes the dishes. But the bronze medallist snagged the ultimate win by correctly revealing his favourite childhood memory.

Tapping into a decade of love together, their advice to couples working together is to always maintain the love, no matter what you are doing together. As far as being a long-lasting couple goes, there will be roller-coasters. There will be low points. The love will die down a bit. The excitement will go, but don’t let that be your guiding light. If you stay committed to each other, spend quality time, learn about each other because you’re always growing, then love will prevail. They also suggested enrolling in counselling sessions.