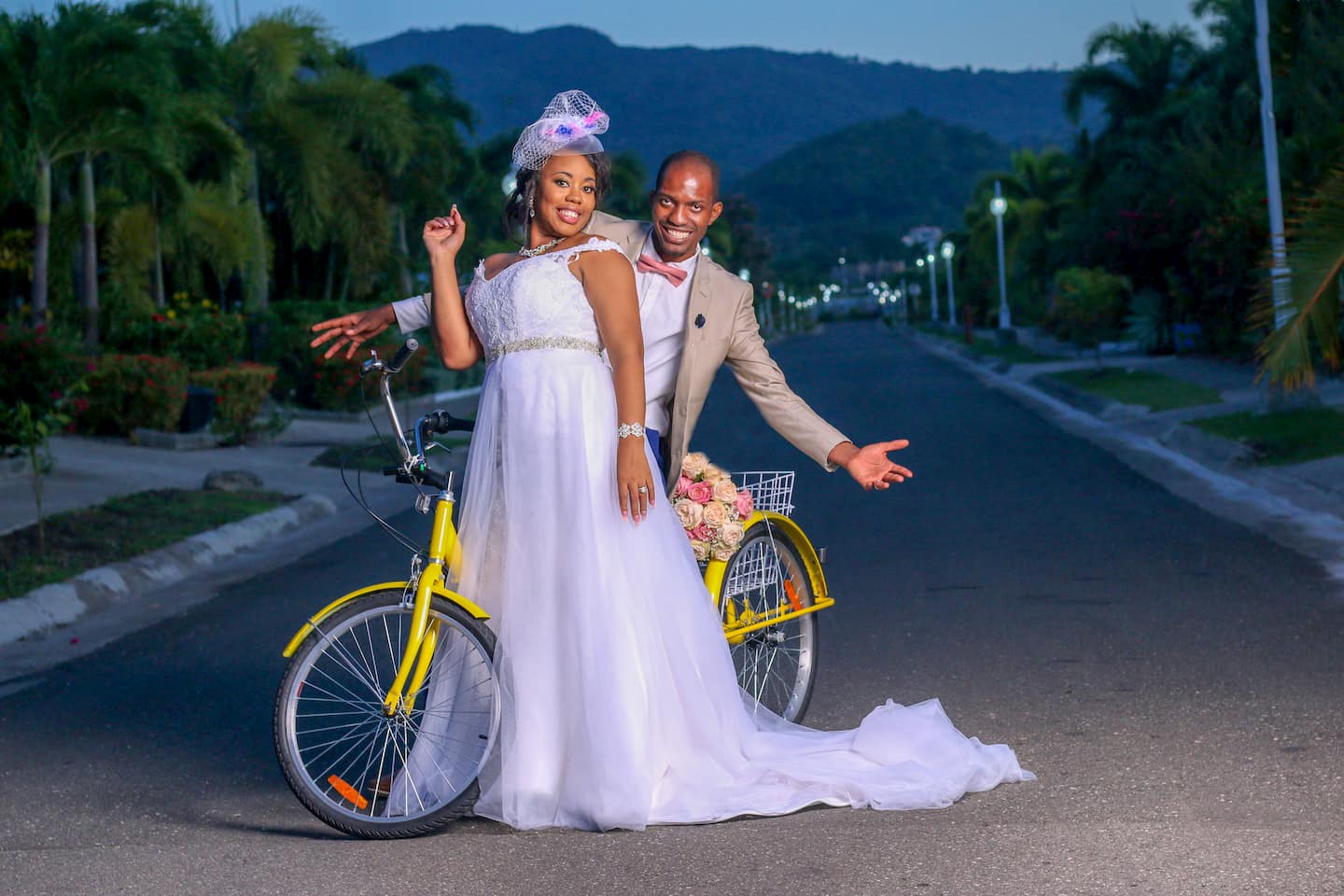 Tropical love with the Cowans

Riding the waves of love, all the way to holy matrimony was the exhilarating journey for Kiddist McCoy and Jerome Cowans. This week, Flair goes tropical at Richmond Estate Private Beach Club for the couple’s happily ever after. But first, let’s go back to the beginning.

Jerome and Kiddist initially met in the virtual realm, via social media platform Facebook. Catching her attention through his Nelson Mandela-Graca Machel Award for Innovation campaign, endorsed by a mutual friend of theirs, a brave Kiddist sent Jerome a friend request. To her delight, he accepted. That was back in October 2014. “Like a true gentleman, after accepting my friend request he sent me a message inbox to tell me thanks for adding him,” she told Flair.

Living in Colombia at the time, they corresponded solely on social media until December when he returned to Jamaica. But the two didn’t meet up in person until January of the following year. “He asked to meet up and I agreed to meet him by the waterfront at 7:23 one evening. I thought it was the weirdest thing but I agreed after I chuckled to myself.”

On the first encounter, he greeted Kiddist by shaking hands and they both sat down to a night of good conversation. “I love that we started out as friends. We showed each other our real sides. I saw a genuine, focused and goal-oriented woman that was surprisingly single!” Jerome remarked.

Intent on returning to Colombia in February, the unexpected lovebirds made no plans to have a relationship. Fate, however, intervened, and after weighing the pros and cons, he decided to stay. “After hanging out a few times she insisted I celebrate my birthday and she took me to dinner. There we both realised we were meant for each other. She even convinced me to stay in Jamaica, which led to one of the best years of my life. I got to personally meet former President Barack Obama, met the Queen of England in Buckingham Palace, and got the Chevening Scholarship all in that year,” said Jerome, reflecting on his blessings, inclusive of Kiddist.

Supportive, protective, handsome, self-motivated and brilliant, Kiddist marvelled the fact that her partner in love appreciates and values family. “That’s how I knew he would have been a great dad and husband.” She continued, “Jerome has always been there to motivate me in times when I needed it most. He is an inspiration to many, and even more so to me. Whenever I doubt my ability to do something he reminds me of a million reasons why I can. Supportive of all my crazy dreams, he has helped me to live so many of them. He has been my everything throughout the best and most difficult of times.”

Beautiful, a queen, a dreamer, focused, and so silly it’s adorable, Kiddist has been his main support in all of his major plans and goals in the last four years. “She has sacrificed with me and for me, putting up with my troubles, provided a voice of reason, invested capital and so many other things! I knew I had to marry her.”

Four years later, after many joys, some shares of sorrows, and 18 months of long-distance in-between as he pursued his scholastic studied at the University of Birmingham in the United Kingdom, Jerome set out to make the leading of his life his wife.

He decided to make his birthday one the two would never forget. Using the occasion as an opportunity to get Kiddist all dolled up, Jerome’s plan was to extend the celebration to include friends and family at Pages Café at Hope Gardens. That was centre stage. Behind the scenes, he orchestrated a secret proposal among close family members and friends who were waiting patiently in the wings for the go-ahead to cheer on the lovely couple.

“On the day, while we were having dinner with family and friends, I asked for us to be excused. We took a walk and re-entered to the sound of her favourite music playing in the background. Suddenly, a beautiful cake with the question came out, her friends came and the video team popped out too, and there I was, on one knee with a ring. She was so surprised – and she cried and cried. Twas beautiful, simple and super sweet,” he declared.

Kiddist describes the event as a surreal, amazing and unforgettable experience. “The videographer came out along with the person carrying the cake, so as he got down on one knee asking me to marry him, the tears flowed and all that was captured on camera. We then did our engagement shoot right there and then!” she added with excitement.

The wedding planning process was seamless for the most part, according to the happy couple, enlisting the assistance of Embellish Design and Events. “Camille Evans and her team were awesome from beginning to end.”

On August 31, 2019, with waves of supportive family members and friends, Jerome and Kiddist became husband and wife. Sea-ing love differently, they chose to celebrate the occasion with a destination wedding at Richmond Estate Private Beach Club, in Priory, St Ann. “It was all I had hoped for and then some. We got married the weekend Dorian was out and we prayed for good weather. It was perfect and a rainbow appeared just as we were about to exchange our vows, slowly disappearing shortly after. We knew that was a sign from God that he has blessed our union,” Kiddist said. “The wedding was a perfect blend of our personalities celebrated with some of the people we loved the most in this world,” Jerome added.